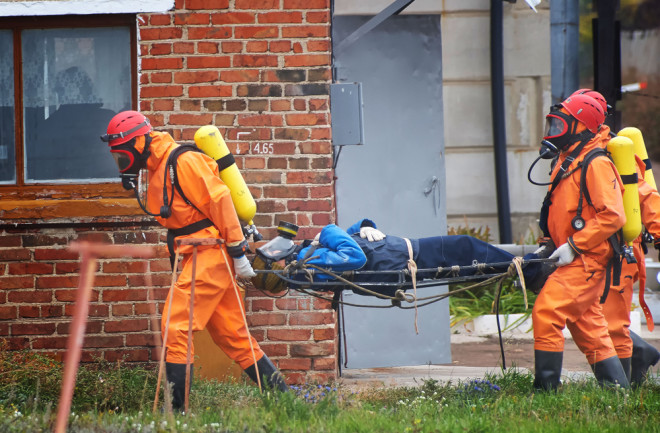 Chemical nerve agents are some of the most horrifying tools of war today. The compounds kill by paralyzing the nervous system and have been used in devastating attacks on civilians or soldiers in war zones. And they can appear, albeit in smaller doses, in pesticides used in developing countries, endangering farm workers after prolonged exposure.

For years, researchers have been searching for antidotes or treatments that could save those afflicted by these deadly chemicals. In a paper out today in Science Translational Medicine, a team from the U.S. Army Medical Research Institute of Chemical Defense has announced a potential solution: a gene therapy that grants immunity to the effects of nerve agents like sarin.

Nerve agents are compounds that interfere with a person’s nervous system. As the chemicals pass through a body after exposure to skin or through inhalation, they disable an enzyme called acetylcholinesterase that’s needed for communication between neurons. The results are devastating: An affected person will involuntarily discharge tears, saliva, urine and feces, experience seizures and paralysis, and rapidly die from asphyxiation.

Scientists have found that that certain enzymes in the body called “bioscavengers” find and break down the toxic nerve agent molecules in the body, disabling them and preventing harm. In earlier work, the Maryland-based team found that a certain variation of a enzyme made in the liver called PON1 was particularly effective. When injected into a mouse, it granted immunity to nerve agents’ effects — temporarily. But now the team has used a gene therapy to coax the body to make the enzyme, continually, on its own.

In the new study, the team focused on a gene that carries the instructions for the most potent version of the PON1 enzyme, called PON1-IF11. By putting the gene into a virus — a common technique used to deliver a gene to a host — they were able to successfully introduce PON1-IF11 into mice. After injecting the rodents, just once, with the viral vector containing the gene, the mice became immune to the common nerve agents tabun, sarin, cyclosarin and soman.

The results were encouraging. "[I felt] great satisfaction and excitement," said Venkaiah Betapudi, a molecular cell biologist and first author of the paper, in an email. "[I'm] anxious to take this work to next level and make this modern medicine available to our soldiers."

The immunity lasted for the full 5 months of the study, but in theory, it should last for the lifetime of the animal.

“As long as the animal lives, the enzyme is there," says Nageswararao Chilukuri, who leads the research group. "We stopped [the study] at five months after the injection, but if we had measured 6 months, 7 months, 8 months … I think it will be there. We just don’t have the data to show it.”

But Chilukuri emphasizes that we’re a long way from seeing anything close to a “nerve agent vaccine” for humans that uses the new technique.

“Gene therapy products are only for diseases right now,” he explains. “We are trying to use this for healthy people. We don’t know the long-term safety profile of the viral vectors. We have to be absolutely sure that when we inject a virus, that 50 years from now it will not be toxic or cause any complications.”

But when it does come of age, it could have broad applications. "This modern medicine can protect sniffing dogs in the battlefield and TSA and border security operations," says Betapudi.

Luckily, many researchers studying gene therapy more broadly are asking these questions too, so answers may soon emerge regarding the safety of this type of gene therapy.

[Editor's note: This post has been updated to include comments from Venkaiah Betapudi, and to clarify the respective contributions of Nageswararao Chilukuri and Betapudi.]