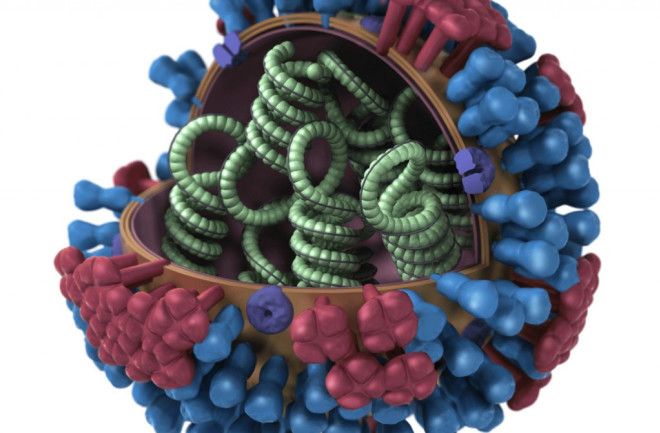 A cutaway illustration of the flu virus. CDC The flu is our modern scourge---new strains of the H1N1 virus are constantly emerging and threatening to reach pandemic proportions. But a new study has found that a novel kind of drug, given to mice before exposure to the flu, reduces their level of infection and makes them much more likely to survive. Flu vaccines are fairly effective, but they are strain-specific and so must be revised every year. At the moment only two broad antiviral flu medicines are effective to prevent and treat most kinds of flu---Tamiflu and Relenza. But there's evidence that the H1N1 virus might be developing resistance to them.

Signs of the Flu

The key to this study was that researchers were able to isolate just one: prostaglandin E2 or PGE2, which they found to be most directly connected to the flu. Researchers gave mice drugs to block PGE2 production, and then gave them a lethal dose of H1N1 virus. Twelve days later, the mice had lower levels of the virus in their lungs, showed better immune responses, and were more likely to survive the flu when compared to the control mice. The results, published in the journal Immunity today, suggest that targeting the PGE2 molecule specifically will lead to more effective protection against the flu. Plus the drugs to block PGE2 already exist, so researchers say they shouldn't be too far from clinical trials.