New Anti-Virus Strategy: Let Them Know They're Not Welcome

Instead of killing viruses directly, one biologist is trying to turn the host’s body into an inhospitable place for the germs to stay. 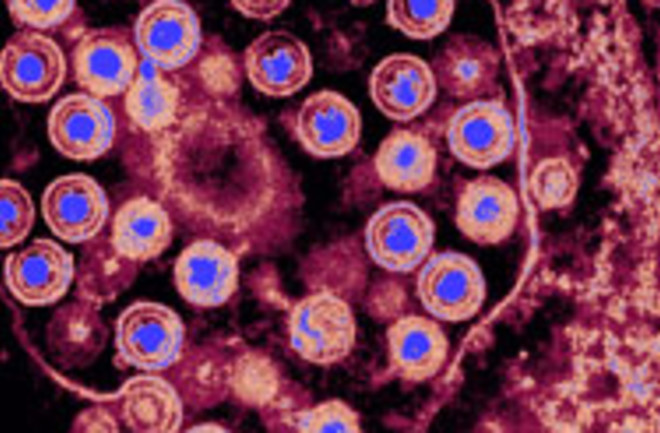 A cell infected with the herpes simplex virus (round shapes).F.A. Murphy/University of Texas Medical Branch | NULL

Viruses, little more than some RNA or DNA wrapped in a protein coat, are among the simplest sources of illness. They are also the most difficult to destroy. Antibiotics are impotent against them, and the few drugs targeting a specific virus often lose their efficacy as the pathogen evolves. So it is time for a fresh approach, a University of Edinburgh cellular biologist says.

Amy Buck and her colleagues studied microRNAs, snippets of genetic material in a host organism—you, for instance—that influence the proteins the organism’s cells produce. The researchers identified several human and mouse microRNAs that seem to create an unfavorable physiological environment for viruses. When they cranked up levels of those RNAs in cells infected with herpes, the viruses almost stopped reproducing. The same microRNAs were also effective against Semliki Forest Virus, a mosquito-borne pathogen with a very different life cycle and genetic makeup.

By taking away materials viruses need to survive rather than attacking them from the outside, the technique might be more useful against a wider range of viruses, and for a longer time, than any one drug. “We’ll never get around the fact that viruses mutate,” Buck says, “but we can develop these alternative strategies.” She is now testing the approach against one of the most common viral killers: seasonal flu.