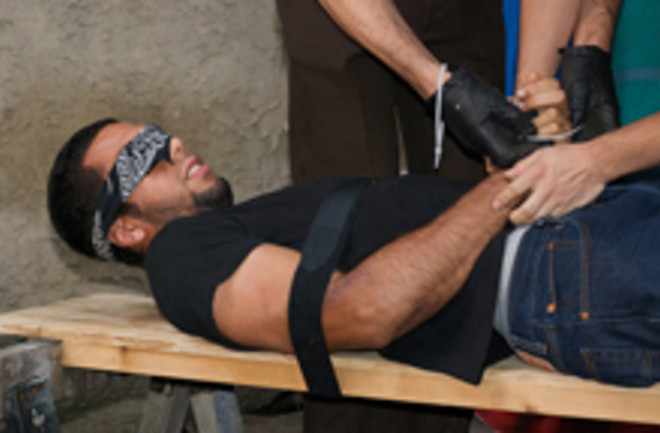 Sleep deprivation. Stress positions. Waterboarding. These interrogation techniques used by the Bush administration in the war on terror were explained, at the time, as harsh but necessary tactics that forced captives to give up names, plots, and other information. But a new look at the neurobiological effects of prolonged stress on the brain suggests that torture damages the memory, and therefore often produces bad intelligence. Irish neuroscientist Shane O'Mara

reviewed the scientific literature about the effect of stress on memory and brain function after reading descriptions of the CIA's Bush-era interrogation methods. The methods were detailed in previously classified legal memos released in April. O'Mara did not examine or interview any of those interrogated by the CIA [AP].

. The study, to be published in the journal Trends in Cognitive Sciences, took note of the effect of the stress hormone cortisol on the brain, as well as the fear-related hormone noradrenaline's impact on memory and the ability to distinguish true from false.

O’Mara derides the belief that extreme stress produces reliable memory as “folk neurobiology” that “is utterly unsupported by scientific evidence.” The hippocampus and prefrontal cortex — the brain’s centers of memory processing, storage and retrieval — are profoundly altered by stress hormones. Keep the stress up long enough, and it will “result in compromised cognitive function and even tissue loss,” warping the minds that interrogators want to read [Wired.com].

The researcher notes that studies of soldiers under extreme stress have shown that the soldiers have trouble recalling personal information, and that brain scans of torture victims have shown unusual patterns of brain activation. According to O'Mara, the studies show that first off,

the suspect may parrot or embellish suggestions from the interrogators rather than revealing something both truthful and unknown to the interrogators. Second, cortisol-induced damage to the prefrontal cortex can cause confabulation, or false memories. Because a person being tortured loses the ability to distinguish between true and false memories, as a 2008 study showed, further pain and stress does not cause him to tell the truth, but to retreat further into a fog where he cannot tell true from false [Newsweek].