The Neanderthals are a well-distinguished Middle Pleistocene population which inhabited a vast geographical area extending from Europe to western Asia and the Middle East. Since the 1950s paleoanthropological studies have suggested variability in this group. Different sub-groups have been identified in western Europe, in southern Europe and in the Middle East. On the other hand, since 1997, research has been published in paleogenetics, carried out on 15 mtDNA sequences from 12 Neanderthals. In this paper we used a new methodology derived from different bioinformatic models based on data from genetics, demography and paleoanthropology. The adequacy of each model was measured by comparisons between simulated results (obtained by BayesianSSC software) and those estimated from nucleotide sequences (obtained by DNAsp4 software). The conclusions of this study are consistent with existing paleoanthropological research and show that Neanderthals can be divided into at least three groups: one in western Europe, a second in the Southern area and a third in western Asia. Moreover, it seems from our results that the size of the Neanderthal population was not constant and that some migration occurred among the demes.

Here's a schematic showing the models that they tested, with 3 being the one that the data support: 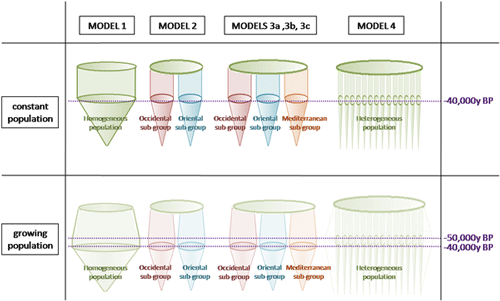 And a map of the regions which these where these three populations were extant: 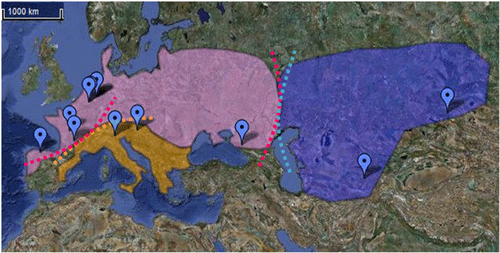 The authors are careful to hedge and caution a great deal about these findings. Small sample sizes as well as fragmentary genetic material (only mtDNA) means that one should take the conclusions with a grain of salt. But to be frank the same issues with the size and representativeness of data sets could be brought to bear to critique conventional paleoanthropology with its reliance on a small number of fossils, so it seems that this sort of work will be a useful supplement. Citation: Fabre V, Condemi S, Degioanni A (2009) Genetic Evidence of Geographical Groups among Neanderthals. PLoS ONE 4(4): e5151. doi:10.1371/journal.pone.0005151