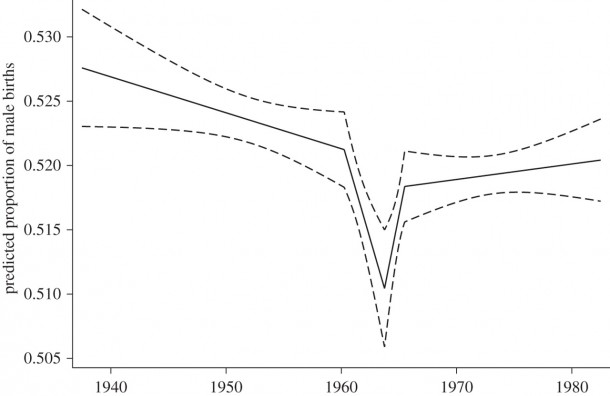 The disastrous economic policies of Mao's Great Leap Forward caused the single deadliest famine in the history of the world. Between 1958 and 1961, an estimated 15 to 45 million people died of malnutrition in China. And during this period, according to a new study, a strangely high proportion of babies born were female. China has had a long cultural tradition of favoring sons over daughters, and boys outnumber girls every year in this data from 1940 to 1980. But from one year after the famine's beginning to two years after its end, the proportion of males drops sharply, as you can see in the graph above. This study may bolster the Trivers-Willard hypothesis, which suggests that poor maternal condition, such as famine, would favor giving birth to more girls. Since the reproductive success of males tend to be more variable---a reproductively successful male can father many children, whereas a unfit one fathers none---girls are a "safer" evolutionary investment in risky times. The birth sex ratios of mammals such as ground squirrels and red deer follow this pattern. Lab experiments where the male blastocytes of cows survive better in glucose-rich environments identified a possible mechanism. For reasons both obvious and fortunate, data on birth sex ratio of humans during famine is difficult to come by. Previous analyses of data from the Dutch Hunger Winter (1944-45) and the Leningrad Seige (1942) have yielded all possible inconsistent results: male biased, female biased, and no bias at all. The author of this paper suggested that those famines, as awful as they were, were too short at six or seven months to have an effect on sex ratios. The Chinese famine lasted for three years. But this observed trend doesn't show why girls outnumber boys in times of famine. There could confounding social reasons, especially as the data is based on a retrospective survey of 300,000 women, but it seems that the Chinese bias toward having sons is more likely to drive the ratio in the other direction. (China's one-child policy was not enacted until 1978, so it has no bearing on the famine data either.) The study's author hopes to follow up by looking at specific region of China that were struck by famine at different times. [via Nature News]