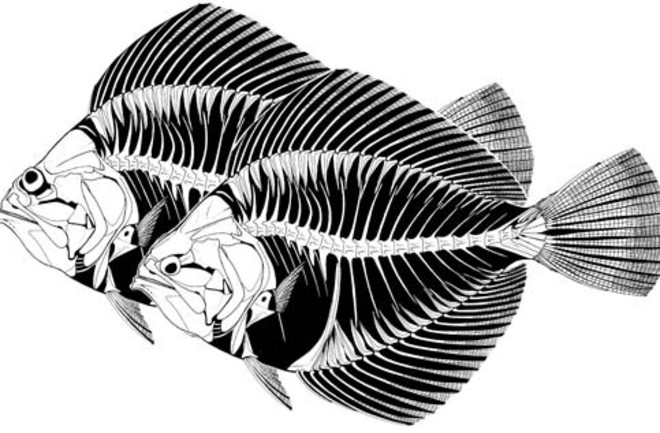 Oh excuse me. I appear to have a cough.

There’s anew press release out about a fossil flatfish called Heteronectes, which is oddly half-committed. In modern flatfishes, like flounders or plaices, one eye moves across the other side of the body, allowing the animal to lie on its side. In this fossil species, the eye only made it halfway around. It’s a beautiful animal.

It was also discovered and described four years ago in a Nature paper, by the same authors. I wrote about it then. That fact is completely missing from the new release, which talks about “a new fossil discovery” described in a new study in the Journal of Vertebrate Palaeontology. The person named on the press release (but apparently didn't write it) Cody Mooneyhan ignored my email pointing this out.

It’s a shame. All it would take to cross the line from misleading to accurate would be a brief acknowledgement of the initial description and then some detail about what the new paper actually entails. As far as I’m aware, it’s a more detailed description of the same specimen, and some discussion about its relationship to other fish. Or maybe what’s new is that they’re writing about it for the second time, which they clearly couldn’t do the first time round :-/

You may not care. After all, a very beautiful fossil gets another shot at the limelight and we can all agree that this is a good thing. The science itself is accurate, even if the timeline is fudged. But I’m a stickler about this. I really don’t think that science is in such a desperate state that we need to wilfully hide information in order to make things more appealing. It's just cheap, and frankly, I think it takes us journalists for fools. Andy Farke also pointed out on Twitter that the Journal of Vertebrate Palaeontology selects just one paper per issue to be laid before the Gods of Media. Some other paper could have used the slot more effectively.