Elizabeth Katkin tried for years to conceive a child. With the help of futuristic fertility tech, she finally succeeded. 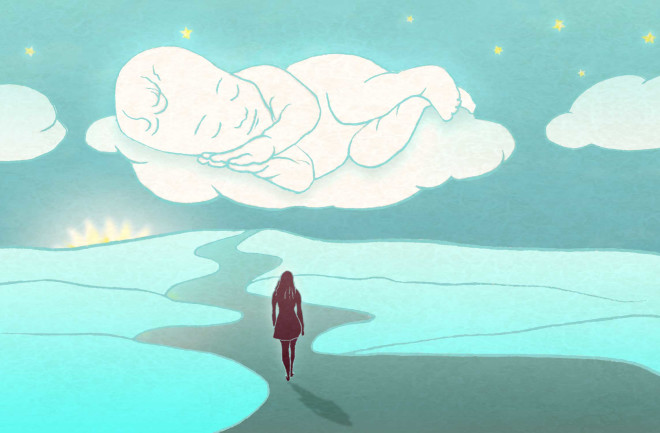 “Do you want to know the gender?” the doctor asked me, after delivering the news of our healthy embryos.

“Do you want to know? Many people want to select.”

“I just want the healthiest embryos,” I answered reflexively. “The ones most likely to survive.”

My doctor had just delivered the genetic testing results of our 13 embryos, created in the lab through in vitro fertilization: three healthy embryos, two girls and one boy. After multiple miscarriages, I wanted a baby who would live. I didn’t care if it was a boy or a girl, with blue eyes or brown, or curly or straight hair. I wanted a baby who was breathing.

I am an accidental fertility expert. Fertility was not something I thought much about, until confronted with years of trying to conceive and the devastating pain of my first miscarriage, followed by six additional miscarriages and almost a dozen failed IVF attempts.

Over the course of nine years, I saw 10 doctors in six countries, and turned to state-of-the-art medical practices as well as traditional approaches to overcome infertility. I tried Clomid to encourage my body to ovulate, then intrauterine insemination (IUI) to assist with fertilization, followed by in vitro fertilization (IVF) to actually force it. When that failed, my husband and I turned to preimplantation genetic testing (PGS) in hopes of finding a good embryo. And when my body couldn’t carry our sole healthy embryo, we finally embraced the idea of a gestational surrogate.

During the course of our years-long fertility journey, my husband and I discovered that we were part of a growing demographic of the infertile in America. Luckily for us, fertility technology is largely keeping pace, enabling the previously infertile to achieve their dreams through new approaches previously reserved for the province of science fiction. The technology is a boon — it’s the reason we have our own children.

But it was also an exhausting process. There was the emotional trauma, physical toll and financial burdens of infertility, and, on top of that, the prospect of forging into legally complicated and morally untested territory.

When my husband and I entered the world of advanced reproductive technology, we had no thoughts of social engineering; we just wanted to have a baby. Yet society abounded with criticisms of the techniques we were employing: Gender selection will lead to people asking for blond-haired, blue-eyed babies. Women will begin using surrogates to avoid getting fat.

These are valid concerns and must be thought about carefully in crafting safe and ethical guidelines. But these slippery-slope arguments fail to convince me. Having subjected myself to uncountable injections, ultrasounds and anesthetized egg retrievals, I simply don’t accept that women would opt for daily needles to create designer babies, or would choose not to carry their own baby to escape putting on weight.

People turn to these technologies because they need them to have a healthy child.

Louise Brown, the first IVF baby, was born in 1978. In the four decades since her birth, new and more powerful techniques have emerged, pushing the boundaries of human reproduction outward. But legal and ethical discussions around fertility technology have stalled, resulting in virtually no national regulation. Paired with a ban on federal research, this means aspiring parents must often assess not only the efficacy, but also the morality, of potential procedures themselves.

For example, before considering the selection of a boy or a girl, we had to confront the question of whether we even wanted the power to choose — a decision that made me uneasy. If I had gotten pregnant naturally, I wouldn’t get to pick the gender. Wouldn’t this be cheating?

Considering what had seemed like the technical question of whether to transfer two or three of the genetically tested, healthy embryos that cycle into a surrogate rather than me suddenly became difficult. It was more than just a science project — we were talking about potentially getting another woman pregnant with two or three babies that would become our actual children, to have and raise forever. But if we transferred too few, we might end up with none. Again.

I agonized all night. Could I handle triplets? Was that fair to Catherine, our surrogate?

I needn’t have worried. By the time we got to the clinic the morning after receiving the news, the male embryo was no longer viable, and the two females were loaded in the catheter to be transferred. We’d avoided an uncomfortable choice — for the time.

But these questions are just the tip of the iceberg when it comes to fertility technology.

A few of the dilemmas hopeful parents must wrestle with: What makes a parent a parent? The person who provides the genetic material? The woman who carries the baby? The individuals who commissioned the birth? (In our case, we carefully chose a jurisdiction in which we were confident that, as the genetic parents, we would be recognized as the legal parents. But that’s not true everywhere.)

Is it morally acceptable to select an embryo for certain traits, like gender? (While we opted not to, people do every day). To create a baby who is a perfect genetic match to save the life of another through bone marrow or organ donation? (If we have the technology, some argue, why not?)

These are hard questions, with no easy answers. Yet future aspiring parents will likely have to deal with still harder choices, as even more disruptive breakthroughs are on the horizon.

Mitochondrial replacement therapy, in which the nucleus of the mother’s egg is removed and injected into a healthy donor egg to avoid certain genetic diseases, was used to create a so-called three-parent baby for the first time in Ukraine in 2017; more are likely to follow. And, in 2018, a Chinese researcher used the gene editing technology CRISPR to edit the genomes of twin girls when they were still embryos to protect them from HIV — a move that was widely condemned as premature. Both techniques irrevocably alter the germ line, meaning that any changes are passed down to future generations.

With the rapid evolution of technology, policymakers can no longer ignore the reality that human reproduction is quickly changing. Legislators must step up to the task of delineating clear rules for parents, doctors and scientists. This includes guidance on parental rights, how many embryos may be transferred during IVF, how many babies may come from a single donor, and, perhaps most importantly, a framework for evaluating the safety, efficacy and morality of emerging techniques, such as gene editing. In the absence of guideposts, doctors and patients alike will face literally life-changing decisions about how far they are willing to go to create a much-desired child.

While the medical community debates these difficult issues, science will, in all likelihood, continue to forge ahead. The very real ethical dilemmas involved in allowing trace amounts of another woman’s DNA to be incorporated into an embryo or genes to be edited before birth notwithstanding, I suspect that new parents have a different perspective on the issue. They are, in all likelihood, simply marveling at their 21st-century miracle babies, and the many paths that can lead them to having the family of their dreams.