This comment made me aware that I should probably be more precise about how I view the "new model," which I will provisionally label "Ecotype Persistence" (EP), as being different from Multi-regionalism in the old school. Consider two variables: Full genome content Phenotypically salient characters (controlled by a few selected loci) Full genome content is the whole shebang, and it can be thought of as a proxy for ancestry. Phenotypically salient characters on the other hand are simply a reflection of adaptation's power in a local time and space, sans phylogenetic constraint they can be easily decoupled from ancestry. My own conception of the old Multi-regional model is that it imagined ancient populations with very deep time histories persisting world wide, that is, the full genome content is not only locally specific, but that specificity projects back into time. Modern Chinese are the descendents of Peking Man, just as Europeans are the descendents of Neandertals. And yet, we are all human. How so?

Because we are united by a particular phenotypically salient character, our cognitive abilities

. Cognition, and other relevant characters which bind our species together, would be spread by pulsing selective sweeps that spread like wildfire from one deme, and jump across all human populations so quickly that speciation is not a possibility. This is anagenesis, a geographically widespread species evolving together over time. In this scenario our species is held together by superstructure of extremely potent and significant characters, such as our intelligence, all the while perpetuating local architectures whose histories reach back into time. 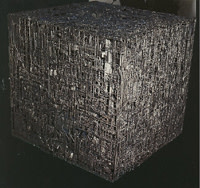 There is a problem with this though: the DNA sequencing era showed that many loci, such as mtDNA, imply strongly that most non-African populations don't have much time depth. In other words, it seems like humans descend from a population of recent origin which exploded out of Africa. The full genome content is fundamentally African. This is where the EP model kicks in. Here is the wiki definition for ecotype in one sentence: An ecotype is a distinct entity of an animal, plant, or other organism that is closely linked (in its characteristics) to the ecological surroundings it inhabits. The model that I am pointing to would hold that phenotypically salient characters may persist across time even when there is nearly total replacement of full genome content because of their local fitness. Light skin might be an example of this, or perhaps a resistance to an endemic parasite. The point here is that instead of being stitched together by a few salient characteristics, our species racial diversity is a function of local characteristics which managed to evade replacement during the demographic expansion of Africans 50-100,000 years ago precisely because of their local selective advantage! When a fitter genetic complex appeared on the scene these alleles were willing to become turncoats and offer up their useful services rather than going down the ship of the previous dominant hominid population. The above is somewhat of a caricature, but I think it gets across what I see as the fundamental distinction between the old Multi-regional paradigm and the new EP model. They simply flip the two parameters above, the old model emphasizes the importance of particular traits in defining our common humanity, while the new model sheds light on why particular traits continue to highlight regional distinctiveness. In the old model one might ask why such an ancient and regionally diverse species still remains one species? Answer: selective sweeps which drive unifying characteristics to fixation. In the new model one might ask why and how such a young and genetically homogenous population can be characterized by such a wide range in phenotypes? Answer: the assimilation of ancient native alleles that are locally adapted allowed the newcomers to quickly morph and track the local environment far more quickly than if they had to depend on their endogenous genetic background variation or for mutation to generate the traits de novo.