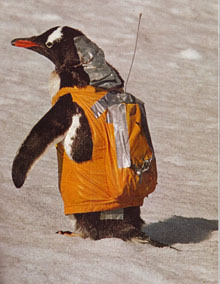 Humans have a habit of using animals to carry things: horses, llamas, sled dogs, messenger pigeons.But the newest “beasts of burden” may be inside our own bodies.Researchers at MIT have strapped tiny “backpacks” to T cells and B cells, which could be used to carry and deliver drugs to targeted tissues like cancer tumors.

The researchers created tiny polymer patches that could latch onto the surface of the immune cells.The patches are synthesized and docked on a holding substrate.They consists of three layers: a temperature-dependent sticky layer that attaches the patches to a holding substrate, a layer that contains the cargo to be delivered, and a binding layer that will attach the patches to the cell surface.Once the system is set up, cells are allowed to flow across the patches and get stuck on them.The temperature of the system is then lowered to release the patches from the substrate, and the cells float away with their “backpacks.”

In addition to drugs and chemotherapy agents, the cellular backpacks could carry imaging agents or even magnetic nanoparticles – which would allow researchers to direct the movement of the cyto-mules with a magnetic field, kind of like moving around iron filings with a magnet.