At around the same time that the two big Jewishgenetics papers came out, there was another one in BMC Genetics which I had overlooked. It's open access so you can read the whole thing, but seems like they used 32 STR's as markers. Their primary finding about Jewish populations was that there was a north vs. south distinction, illustrated in this map: 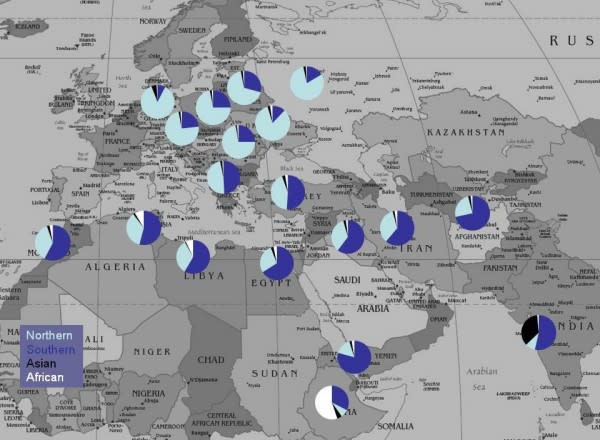 Update: The main author sent me this email:

Hi, I'm the main author of the paper. Although the map (figure 2 from the paper) does depict differences in the northern vs southern assignment values for a subset of the samples in our study, it does not tell the whole story which might be helped by figure 1. The map figure is based only on subjects who had all 4 grandparents from a single country while the STRUCTURE figures (figure 1) are based on all subjects. There were two main points to the paper. 1. There is a difference, on average, between Ashkenazi and non-Ashkenazi Jewish gene pools and 2. It was only possible to detect this with a small marker panel when hypothetical ancestral or "host" populations were included in the analysis. In the absence of representative major continental populations, the Ashkenazi and non-Ashkenazi Jewish populations were not distinguishable with the small set of markers. I believe that the dependence of ancestry assignment on which markers and which reference populations are included in an analysis has been mentioned a few times by Razib. This is relevant to the way in which certain gene mapping studies are carried out. For medical genetics studies it is important to know if subjects are from the same population or not; if they are not it can lead to false positive results. Jewish populations are heavily studied in medical research and so we wanted to demonstrate that Jewish populations from different parts of the world should not be lumped together for analysis in medical genetic studies. Based on published mtDNA and y-chromosome studies as well as historical records we assume that the ""Southern" component of ancestry is Middle Eastern in origin and that differences between Ashkenazi and non-Ashkenazi populations are due to both genetic drift and differences between the populations that contributed to the Jewish gene pools in a given location.