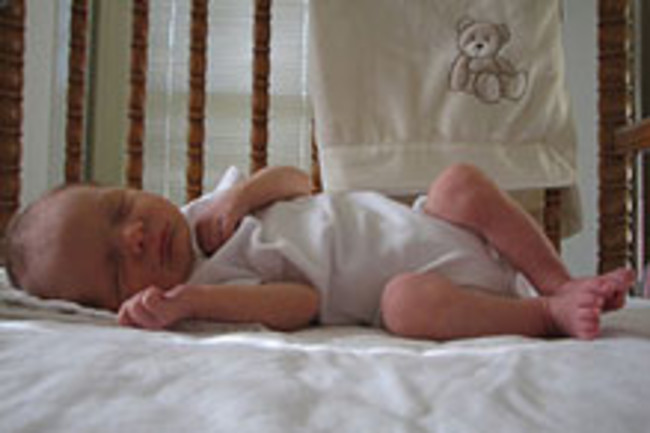 Researchers have the best evidence yet that the brain chemical serotonin plays a role in sudden infant death sydrome (SIDS). In a new study, researchers genetically engineered mice to have low levels of serotonin at birth, and found that more than half of the mice abruptly died before they were 3 months old. More intriguing, they had erratic episodes where their heart rate would drop and, five to 10 minutes later, so would their body temperature, [study author Cornelius] Gross reported. Sometimes they died in the midst of what Gross calls those crises, other times afterward

. Serotonin is most commonly known as a mood regulator involved in depression, but it also helps control some of the body's most basic functions, including breathing, heart rate, and body temperature. The mouse study supports earlier data gathered from the autopsied brain tissue of SIDS babies, which showed alterations in brainstem nerve cells that communicate using serotonin.

Researchers say that they don't fully understand why the mice died, and stress that there's a lot of research to be done before they'll learn whether the mechanism is the same in humans. The results are “very preliminary,” but to have any model in living creatures that relates unexpected death to serotonin “is a really big deal,” says [SIDS expert Rachel] Moon, who was not involved in the new study [Science News].

SIDS took the lives of about 2,200 babies in the U.S. in 2005, the last year National Center for Health Statistics data is available [Bloomberg].

The mysterious disease is defined as the death of an infant in the first year of life that can't be attributed to any other cause. This study, which appears in tomorrow's edition of the journal Science, offers solace to parents who have experienced the unexpected tragedy of SIDS

: The findings offer more evidence that SIDS is a developmental disorder that babies are born with and not a chance death caused by a parent doing something wrong [Science News].