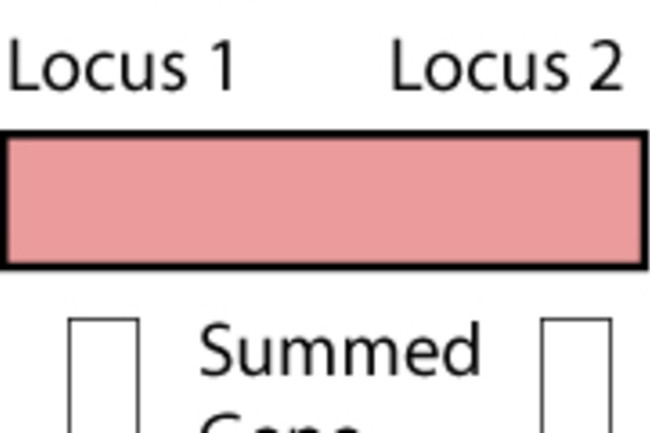 A few months ago I posted Discrete continuity in genetics to show how the granular nature of genetic inheritance may still manifest to our perception as continuous variation (i.e., quantitative traits). I used skin color as a model trait because it is easy to relate to, and we are beginning to understand its genetics in detail as I write. To recap, it seems that 3-5 genetic loci control more than 90% of the intergroup variation across populations in complexion. That is, you have a small number of genes which generate the range between black and white skin. These genes come in various flavors, alleles, which in concert sum up to one phenotype. I used a biallelic model which posited 4 loci of independent and additive effect. If a genotype on locus 1 was Aa, I assumed that the quantitative impact would be 1/2 of AA vs. 0 for aa. And so on for each successive locus, resulting in a biological binomial distribution. But, I do not believe that additivity and independence need to be perfect. I won't address developmental and environmental variance too much because they are pretty straightforward. In industrialized societies 90% of the variation in height is genetically specified because environmental variation in regards to nutrition is not particularly important, malnutrition has been rendered rather irrelevant (obesity is a problem though). Nevertheless, there is still some environmental component of variation. An acquaintance of mine was rather short in comparison to her sisters and she attributed it to her competitive gymnastics. Additionally, there might be an element of stochasticity introduced during development as a fetus prior to birth. How does this explain skin color? Well, there is still wiggle room even outside the genes of large effect, particularly on the individual level. 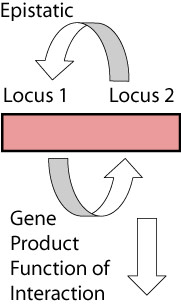 But I am more interested in elaborating on gene-gene interactional effects, because I don't think it is totally clear what I mean here. What I am speaking of here is epistasis, specifically, statistical epistasis, where gene-gene interaction effects the variation of phenotypic expression. Epistasis tends to confound our expectation of additivity and independence, as the conditional and modulating nature of this process results in a non-linear phenotypic response as a function of variation in genetic architecture. In the previous example I assumed four loci, 1-4, in two flavors each which contributed 0 or 1 quantitative units. But what if the the expression of locus 1 was conditional on the character of locus 3? For example, if locus 3 is A, locus 1 is independent of it, but what if allele B produces a protein product which interacts with locus 1 and abolishes expression? In this case, when you have allele A on locus 3, for locus 1 you have: allele A = 0 quantitative contribution allele B = 1 quantitative contribution But, when you have allele B on locus 3, for locus 1 you have: allele A = 0 quantitative contribution allele B = 0 quantitative contribution Now the contribution of locus 1 is contingent upon the nature of locus 2, independence has been violated. One can also imagine a scenario where the "loss of functional alleles," A, complement each other so that if both are A they generate function. That is, when locus 1 and locus 3 are both A quantitative contribution is 2, but when only one is A then that allele no longer contributes. It is important here for me to emphasize that the mechanistic details are irrelevant. Those of you familiar with molecular genetics can formulate a host of "lock & key" models to posit how the genetics is manifesting on a biophysical scale, but for statistical epistasis this can be treated in a "black box" manner. But finally I want to get to why I am writing this post. I receive many comments like this:

I just want to make sure that I'm getting it right. Let's assume that a black man and white woman marry each other (non of them are bi-racial). Their kids' skin will be for sure brown skinned (not by any chance white or black), since 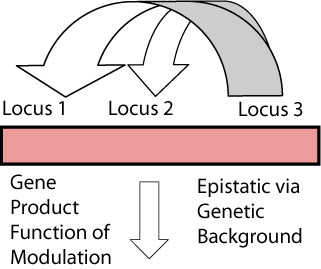 What I've said so far should illuminate what I'm talking about now. Though I assume an additive independent model, and while I think this is a good first approximation, there is plenty of potential for these assumptions to be violated, and so one should be cautious about making individual inferences. In the case of the pairing of a pure African individual and a pure European individual the complexion of the offspring should be about midway between the parental values assuming that the alleles are disjoint, that is, that Africans "express" all the loci, and Europeans exhibit "loss of function." This itself is false, Europeans are not albinos, and Africans exhibit some skin color variation (though I suspect that most of this variance is due to the smaller effect loci which comprise the 10% residual in intergroup comparisons). Nevertheless, the expectation should hold. Pedigree analysis from the 1950s and 1960s in the United Kingdom correctly predicted 4-5 loci of additive independent effect, the genomic data now seems to be vindicating this model. But,

. By genetic backgrounds, I mean here that European and African alleles don't live isolated on the genome but express in a network of biochemical and molecular genetic pathways. Since we are interested in variation we tend to look at the loci that affect that variation and assume that other regions of the genome are irrelevant. To the first approximation this works, but it also assumes that across the range of individuals the genetic variation is randomly distributed with no particular correlations between the loci of interest and other alleles. Consider that almost all Europeans are positive for the Duffy antigen while most Africans are negative. This means that the genetic backgrounds are fundamentally different. We know this intuitively, Africans and Europeans have different genetic histories and so exhibit correlation structure across loci. What if the Duffy antigen has a modulating affect on the skin color loci? Then we might get non-additive responses when we cross individuals from the two genetic backgrounds. Consider the possibility that the Duffy positive antigen has a suppressive modulating effect on alleles which control skin color. If Duffy positive antigen is "dominant," one can create a model where a cross between a European and an African would result in offspring far closer in phenotype to a European because the African alleles lack any "protection" against the suppressive impact of the Duffy antigen. Additionally, the European production of pigment might be due to alleles which somehow resist the suppressive effect of the Duffy antigen, if these alleles are not passed on to the next generation (assuming they aren't fixed in the population) offspring might be even lighter skinned than the European parent because of total suppressive of genetic expression! This is not a real model, but, it is used to illustrate the confounding effect that epistatic interactions might have. Do I think this is common for skin color? No. Do I think this is trivially improbable? No. Related:What's all the fuss about epistasis?.