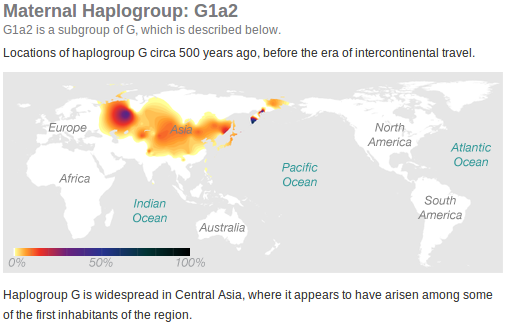 The above image, and the one to the left, are screenshots from my father's 23andMe profile. Interestingly, his mtDNA haplogroup is not particularly common among ethnic Bengalis, who are more than ~80% on a branch of M. This reality is clear in the map above which illustrates the Central Asian distribution my father's mtDNA lineage. In contrast, his whole genome is predominantly South Asianform, as is evident in the estimate that 23andMe provided via their ancestry composition feature, which utilizes the broader genome. The key takeaway here is that the mtDNA is informative, but it should not be considered to be representative, or anything like the last word on one's ancestry in this day and age. As a matter of historical record mtDNA looms large in human population genetics and phylogeography for understandable reasons. Mitchondria produce more genetic material than is found in the nucleus, and so were the lowest hanging fruit in the pre-PCR era. Additionally, because mtDNA lineages do not recombine they are well suited to a coalescent framework, where an idealized inverted treelike phylogeny converges upon a common ancestor. Finally, mtDNA was presumed to be neutral, so reflective of demographic events unperturbed by adaptation, and characterized by a high mutation rate, yielding a great amount of variation with which to differentiate the branches of the human family tree. Many of these assumptions are are now disputable. But that's not the point of this post. In the age of dense 1 million marker SNP-chips why are we still focusing on the history of one particular genetic region? In a word: myth. Eve, the primal woman. The "mother of us all," who even makes cameos in science fiction finales!

In 1987 a paper was published which found that Africans harbored the greatest proportion of mtDNA variation among human populations. Additionally, these lineages coalesced back to a common ancestor on the order of 150,000 years ago. Since mtDNA is present in humans, there was a human alive 150,000 years ago who carried this ancestral lineage, from which all modern lineages derive. Mitochondrial DNA is passed from mothers to their offspring, so this individual must have been a woman. In the press she was labeled Eve, for obvious reasons. The scientific publicity resulted in a rather strange popular reaction, culminating in a Newsweek cover where Adam and Eve are depicted as naked extras from Eddie Murphy's Coming to America film. The problem is that people routinely believe that mtDNA Eve was the only ancestress of all modern humans from the period in which she lived. Why they believe this is common sense, and requires no great consideration. The reality is that the story being told by science is the story of mtDNA, with inferences about the populations which serve as hosts for mtDNA being incidental. These inferences need to be made cautiously and with care. It is basic logic that a phylogeny will coalesce back to a common ancestor at some point. Genetic lineages over time go extinct, and so most mtDNA lineages from the time of Eve went extinct. There were many woman who were alive during the same time as Eve, who contributed at least as much, perhaps more, to the genetic character of modern humans today. All we can say definitively is that their mtDNA lineage is no longer present. As mtDNA is passed from mother to daughter (males obviously have mtDNA, but we are dead ends, and pass it to no one), all one needs for a woman's mtDNA lineage to go extinct is for her to have only sons. Though she leaves no imprint on the mtDNA phylogeny, obviously her sons may contribute genes to future generations. Prior to ancient DNA and the proliferation of dense SNP data sets scholars were a bit too ambitious about what they believed they could infer from mtDNA and Y lineages (e.g., The Real Eve: Modern Man's Journey Out of Africa). We are in a different time now, inferences made about the past rest on more than one leg. But the legend of Eve of the mtDNA persists, not because of its compelling scientific nature, but because this is a case where science piggy-backs upon prior conceptual furniture. This yields storytelling power, but a story which is based on a thin basis of fact becomes just another tall tale. All this is on my mind because one of the scientists involved with Britain's DNA, Jim Wilson, has penned a response to Vincent Plagnol's Exaggerations and errors in the promotion of genetic ancestry testing (see here for more on this controversy). Overall I don't find Wilson's rebuttal too persuasive. It is well written, but it has the air of sophistry and lawyerly precision. I have appreciated Wilson's science before, so I am not casting aspersions at his professional competence. Rather, some of the more enthusiastic and uninformed spokespersons for his firm have placed him in a delicate and indefensible situation, and he is gamely attempting to salvage the best of a bad hand. Importantly, he does not reassure me in the least that his firm did not use Britain's atrocious libel laws as a threat to mute forceful criticism of their business model on scientific grounds. A more general issue here is that Wilson is in a situation where he must not damage the prospects of his firm, all the while maintaining his integrity as a scientist. From what I have seen once science becomes a business one must abandon the pretense of being a scientist first and foremost, no matter how profitable that aura of objectivity may be. The nature of marketing is such that the necessary caution and qualification essential for science becomes a major liability in the processing of communicating. It's about selling, not convincing. Going back to Eve, Wilson marshals a very strange argument:

“The claim that Adam and Eve really existed, as you suggest, refers to the most recent common ancestors of the mtDNA and non-recombining part of the Y chromosome. I don’t agree that there is nothing special about these individuals: there must have been a reason why mitochondrial Eve was on the front cover of Time magazine in the late 80s!....

A minor quibble, but I suspect he means the Newsweek cover. More seriously, this line of argumentation is bizarre on scientific grounds. Rather, it is a tack which is more rational when aiming toward a general audience which might purchase a kit which they believe might tell them of their relationship to "Eve." In the wake of the discussion at Genomes Unzipped I participated in further exchanges with Graham Coop and Aylwyn Scally on Twitter, and decided to spend 20 minutes this afternoon asking people what they thought about mitochondrial Eve. By "people," I mean individuals who are pursuing graduate educations in fields such as genetics and forensics. My cursory "field research" left me very alarmed. Naturally these were individuals who did not make elementary mistakes in regards to the concept, but there was great confusion. I can only wonder what's going through the minds of the public. Analogies, allusions, and equivalences are useful when they leverage categories and concepts which we are solidly rooted in, and transpose them upon a foreign cognitive landscape. By pointing to similarities of structure and relation one can understand more fully the novel ground which one is exploring. Saying that the president of India is analogous to the queen of England is an informative analogy. These are both positions where the individual is a largely ceremonial head of state. In contrast, the president of the United States and the queen of England are very different figures, because the American executive is not ceremonial at all. This is not a useful analogy, even though superficially it sees no lexical shift. Who was Eve? A plain reading is that she is the ancestor of all humans, and more importantly, the singular ancestress of all humans back to the dawn of time. This is a concept which the public grasps intuitively. Who is mtDNA Eve? A woman who flourished 150,000 years ago, who happened to carry the mtDNA lineage which would drift to fixation in the ancestors of modern humans. I think this is a very different thing indeed. For purposes of poetry and marketing the utilization of the name Eve is justifiable. But on scientific grounds all it does is confuse, obfuscate, and mislead. The fiasco that Vincent Plagnol stumbled upon is just a symptom of a broader problem. Scientists need to engage in massive conceptual clean up, as catchy phrases such as "mitochondrial Eve" and "Y Adam" permeated the culture over the past generation, and mislead many sincere and engaged seekers of truth. This is of the essence because personal genomics, and the scientific understanding of genealogy, are now moving out of the ghetto of hobbyists, enthusiasts, and researchers. Though I doubt this industry will be massive, it will be ubiquitous, and a seamless part of our information portfolio. If people still have ideas like mitochondrial Eve in their head it is likely to cloud their perception of the utility of the tools at hand, and their broader significance.