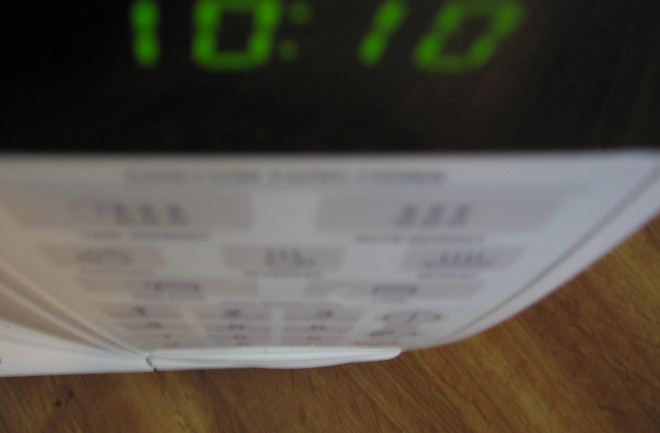 Photo Credits: flickr/Miles Rausch Do you value convenience? Do you hate waiting for food to heat? Are you a college student? If you answer yes to any of these questions, you likely own a microwave. In the year 2000, 90% of Americans did^1, and for good reason. Microwaves provide an incredibly quick and efficient method of heating foods. Next time you have, say, 2:00 minutes to spare, you can reflect upon the physical phenomena that heats your hot pockets, pops your popcorn, and requires minimal human input. This is the electromagnetic spectrum, which depicts all possible frequencies of electromagnetic radiation:

Image credit: Wikimedia commons Electromagnetic radiation is created when an atomic particle, such as an electron, is accelerated by an electric field, causing it to move. The movement produces oscillating electric and magnetic fields, which travel at right angles to each other in a bundle of light energy called a photon.^1 When these electromagnetic waves come into contact with other atoms, they transfer energy and cause increased vibrational movement in those atoms. The spectrum is divided into eight regions, in order of increasing wavelength (symbolized by the Greek letter λ) and decreasing frequency (greek letter ν) from left to right. Wavelength is the measurement between two consecutive peaks of a wave, and frequency describes how many wave cycles there occur per unit of time. A commonly used unit of frequency is the Hertz, which equals one cycle per second. Waves with higher frequencies and shorter wavelengths have more energy than longer, slower waves.

A transmitter inside the casing of the microwave box creates an electromagnetic field in the oven which reverses its polarity 2 to 5 billion times every second.^2 This results in an electromagnetic wave at a frequency of approximately 2,450 million cycles per second and wavelengths of about 12 centimeters.^2 These waves are reflected off the interior walls of the microwave oven, and are too large to pass through the holes of the metal mesh on the glass window; so thankfully they won’t cook any innocent bystanders. Microwaves only transfer energy to polar molecules. A polar molecule has one end that is slightly more negatively charged than the other - a water molecule is a perfect example.

Within the food, polar molecules rotate as they continually try to align themselves with the oscillating electromagnetic wave, similar to how a magnet will rotate to align itself if put between two other magnets. Fruits, vegetables, meats, dairy, even grains and seemingly dry, processed carbohydrates like breads and pastas all contain water. The remaining nonpolar molecules in food - like fats and minerals - are not heated by the microwaves themselves. Microwaves only transfer energy to polar molecules, which in turn transfer energy to everything else, including the air (which consists of non-polar oxygen, nitrogen, and hydrogen molecules) inside the microwave. Kitchen lore says that microwaves cook foods from the inside out. This is true to a certain extent. However, it is incorrect that microwaves penetrate deep within foods before they do their magic. Foods that one tends to heat in a microwave - for example, pot pies - simply have a higher water content at the center versus the exterior, so the center heats more quickly.^3 Try heating soup in the microwave. The top inch or so will be the first to heat up, while the bottom remains cool. Conversely, the innards of a pot pie can turn to molten lava while the crust has just barely lost its chill. Why can’t aluminum foil go in the microwave? Metals are very good at conducting electricity and heat because of two primary atomic properties. Positive metal ions are closely packed in a lattice,^4 while the electrons of metal atoms are delocalised and can move freely throughout the positive ion lattice. Heat describes the sensation of energy transfer from one object to another, and delocalised electrons are great at transferring energy. Small or thin pieces of metal, like foil or the handle on a take-out box, heat up very quickly and can cause a fire. If the foil is crinkled so that it forms any sharp corners, the electrical current running through the foil will create an electrical arc^5 - a current that flows between two points separated by a gas (in this case, air). Gases usually don’t conduct electricity well, but if sufficient energy is supplied, its atoms or molecules will break apart into charged particles, which do conduct electricity.^6

Photo Credit: flickr/get directly down What to microwave, and what not to microwave There are many dishes that can be entirely cooked in a microwave – vegetables and grains do well. There are even recipes for single-serving microwave-baked cakes! One major food category that doesn’t do well in microwave cooking is meats. You can’t brown meats in the microwave because the exterior doesn’t get hotter than the interior. You’ll never attain a sear or a char - the best you can do is a sad, grey-brown surface. Additionally, because meat must reach a relatively high temperature before it is cooked, a good amount of water will evaporate by the time the meat is done, and it can turn out quite dry. Other things you shouldn’t microwave, but are fun to watch others do: shelled eggs and grapes. In short, things with outer membranes or shells don’t expand well, so when their liquid centers heat up, the pressure within increases until the food – you guessed it – explodes. Resources