You could be sitting alone and still be completely outnumbered for your body is home to trillions upon trillions of tiny passengers – bacteria. Your body is made up of around ten trillion cells, but you harbour a hundred trillion bacteria. For every gene in your genome, there are 100 bacterial ones. This is your ‘microbiome’ and it has a huge impact on your health, your ability to digest food and more. We, in turn, affect them. Everything from the food we eat to the way we’re born influences the species of bacteria that take up residence in our bodies.

This slideshow is a tour through this “universe of us”. Every slide has links to previous pieces that I’ve written on the subject if you want to delve deeper. Or download a podcast of my Radio 4 programme on these hidden partners. 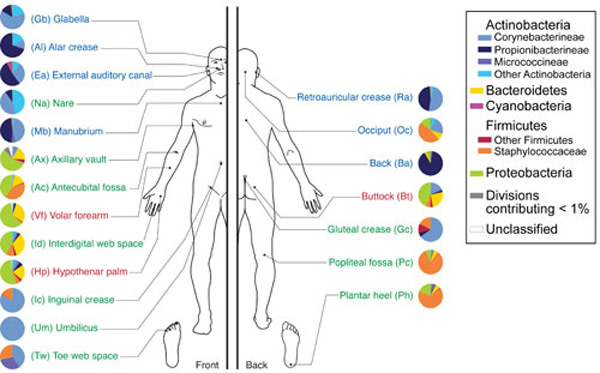 To our microbiome, the human body must seem like an entire planet, full of different ecosystems. This is especially true for those that live on our skin. At the microscopic scale, the hairy, moist surface of your armpits is as different from the smooth, dry skin of your forearms as a rainforest is to a desert.

In a thorough survey of our skin microbiome, Elizabeth Grice identified species from at least 205 different genera. Your forearm has the richest community with an average of 44 species, while your nostril, ears and inguinal crease (between leg and groin) are the most stable habitats. Grice also found at bacteria from a specific body part have more in common than those from a specific person. Your butt microbes have more in common with mine than they do with your elbow microbes.

Despite its diversity, the skin microbiome is a tiny country village compared to the bustling metropolis inside your bowels. The dark corridors of your intestine house more bacteria than any other part of your body. A team of international scientists led by Junjie Qin and Ruiqiang Li discovered that each of our bowels carries at least 160 bacterial species. Together, our collective guts have just under 3.3 million bacterial genes, more than 150 times as many as reside in our own genomes. They also showed that the gut microbiome of a healthy person looks very different to that of someone with a bowel condition like Crohn’s disease or ulcerative colitis.

Despite this diversity, Peer Bork has shown that the gut bacteria of people from Europe, North American and Japan collapse into three enterotypes, or gut types. These clusters cut across age, gender, body weight and nationality. Each produces energy in a slightly different way, manufactures a different vitamin and may affect our susceptibility to different diseases.

The quest to understand gut microbes may seem like an arcane niche of science, but it’s actually very important for public health. We rely on these microscopic passengers more than we realise. They harvest energy from our food, provide us with nutrients that would otherwise be denied to us, prevent the growth of harmful bacteria, and more. In many ways, they’re like a forgotten organ. They can also go rogue, changing their community in ways that are linked to obesity or bowel diseases.

We inherit our microbiomes from our mother, picking up billions of them as we slide from her largely bacteria-free womb through her microbe-laden vagina. Being slathered in vaginal microbes might not seem like much of a treat but it’s vital for a newborn.

Babies end up with a very different portfolio of skin and gut bacteria depending on how they are delivered. Those who are born naturally harbour a more diverse array of bacteria, which resemble those in their mother’s vagina, including several species that are important for digestion. Those who are delivered by C-section are colonised by a less diverse array of bacteria, including some like Staphylococcus that are picked up from the hospital environment.

These early differences could directly affect a baby’s health for these first colonisers determine which the species that will follow. The bacterial heirlooms that babies inherit from their mothers might act as a shield, preventing more dangerous microbes like from setting up shop. By changing baby’s first bacteria, C-sections could alter the make-up of their later communities, leading to long-term effects on health and nutrition.

Our microbiome is like a hidden organ, helping us to break down foodstuffs that our own cells cannot cope with. And in turn, our food affects our microbiome. Our first set is laden with genes for digesting milk proteins, allowing us to make full use of our only source of nourishment as babies. Breast milk might even have evolved to nourish the most beneficial bacteria with special sugars.

Just before we move onto solid foods, our microbiome starts activating genes that break down the complex sugars and starches in plants, preparing us for the menu to come. As our diet diversifies, so do our bacteria. They activate genes that use carbohydrates effectively, produce vitamins, and break down unusual and diverse chemicals. As adults, our microbiome becomes relatively stable, but its membership roster depends on the food we eat. The guts of African villagers who eat high-fibre diets are dominated by plant-digesting specialists, which are much rarer in the guts of Europeans who eat high-fat diets.

Before the age of better food hygiene, our meals used to provide a rich source of foreign bacteria that our microbiome could plunder for genetic tools. Bacteria trade genes as easily as humans trade gifts. For example, the gut bacteria of Japanese people have borrowed genes from a marine species, which now allows them to digest the special carbohydrates in seaweed. The marine bacterium eats seaweed, including the types that are used to make nori, a common sushi ingredient. In the past, when diners wolfed down morsels of nori, some also swallowed seaweed-eating bacteria, which traded genes with those in their own guts.

This wouldn’t happen nowadays because nori is roasted before being eaten. In fact, processing food presents a blockade to bacteria from the outside world and as a result, Western gut communities have become gentrified. They lack genetic diversity, and they have few ways of increasing it. 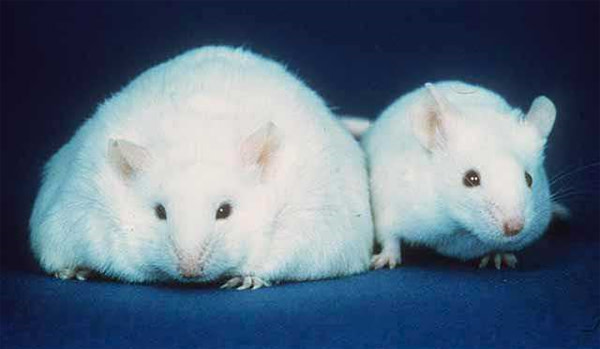 The microbiome is more than just our partners-in-digestion – they affect our health too. They have been linked to a variety of medical conditions, including allergies, immune diseases, and even obesity. For example, the balance of the two major groups – the Bacteroidetes and Firmicutes – could influence our body weight.

Fat mice and humans have a less diverse milieu of gut bacteria, with a greater proportion of Firmicutes to Bacteroidetes in their bowels. This ratio increases if we eat high-fat diets and falls if we eat low-fat diets. And if the gut bacteria from fat mice are transplanted into mice with no gut bacteria of their own, they can make the new hosts overeat and pile on the pounds. This research suggests that gut bacteria could be manipulating us for their own ends. Some species send out signals that make us hungrier, encourage us to eat more, and affect the way we store fat. And some of our immune genes help to moderate these signals.

As we learn more about our bacterial partners, we might eventually find ways of influencing them to improve our health. This is already happening. In 2008, Alexander Khoruts from the University of Minnesota managed to cure a woman with a “vicious gut infection” by giving her a transplant of her husband’s gut bacteria. 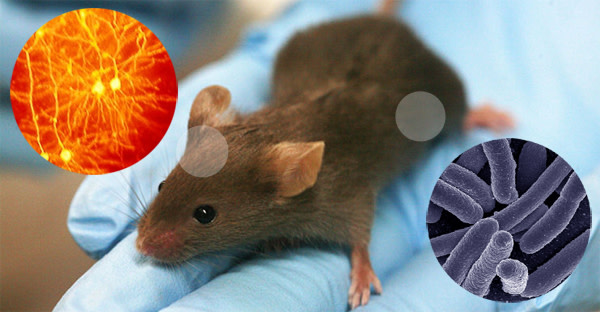 What happens in the gut doesn’t stay in the gut – it sometimes affects the brain. Animal studies have started to show that the microbiome, from its staging ground in the bowel, can influence the development of its host’s brain.

Rochellys Diaz Heijtz found that germ-free mice, without any microbiome, were more active, less anxious and less risk-averse than usual. Their brains differed in the activity of over a hundred genes that provide cells with energy, influence chemical communications in the brain and strengthen the connection between nerve cells. Heijtz could even shift her germ-free mice towards “normal” behaviour and genetic activity by giving them a microbiome transplant, but this only worked early in their lives.

But later, Javier Bravo at University College Cork managed to change the behaviour of normal adult mice by feeding them with a probiotic bacterium called

, often found in yoghurts and dairy products. The bacterial menu changed the levels of signalling chemicals in the rodents’ brains, and reduced behaviours associated with stress, anxiety and depression.

Meanwhile, Gil Sharon found that gut bacteria can shape the sexual choices of flies. Flies that are raised on diets of starch prefer to mate with other “starch flies” while those raised on maltose prefer “maltose flies”. When Sharon dosed the flies with antibiotics, she killed both their gut bacteria and their sexual preferences. If she inoculated the sterile flies with the microbiome of their peers, their preferences reappeared instantly. It’s possible that the bacteria influence the levels of sex pheromones that affect the fly’s attractiveness.

These studies show that you can’t understand an animal’s evolution simply by considering the evolutionary pressures that act on its genome. You also have to consider the genes of the bacteria and other passengers that live inside it. We’re each like a superorganism – a unified alliance between the genes of several different species, only one of which is human. 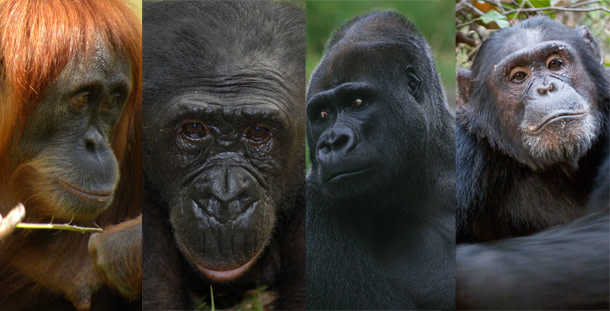 The teeming masses of the microbiome also contain a record of our evolutionary past. Howard Ochman found that the evolution of the gut microbes in great apes perfectly recaps that of their host. The bacteria from the two species of gorilla are more closely related to each other than they are to human gut bacteria. Geography, diet and disease aside, the main thing that influences the members of these bacterial cities is the species of the host. You could reconstruct the evolution of the apes, simply by comparing the bacteria in their bowels. 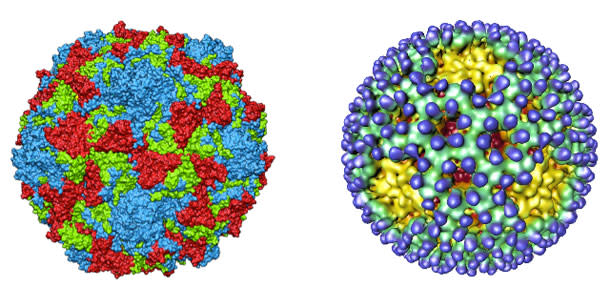 The bacteria of our microbiome are mostly our allies. But they can also they can be turned against us. Two new studies in mice have found that viruses - including one that causes polio, and another that causes cancer - can exploit gut bacteria to infect our bodies.

They use molecules on the bacteria's surfaces as reins, to ride towards host cells, or backstage passes to sneak past the immune system. Our microscopic allies can turn into unwitting collaborators for dangerous infections.

HealthCould We Be Living With COVID-19 Forever?