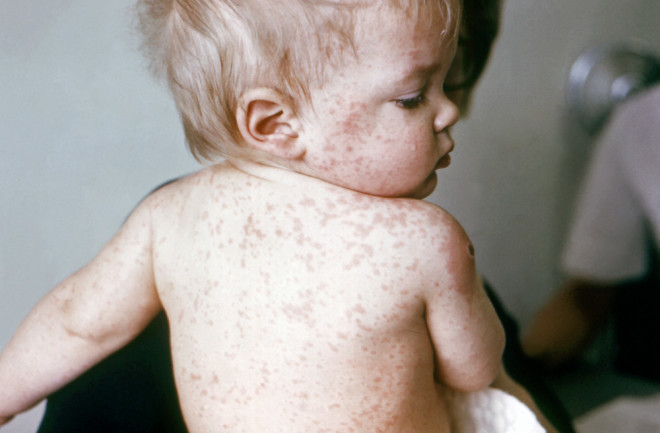 The outbreak of measles that originated at Disneyland earlier this year drew lots of attention to gaps in vaccination for the disease. More than 100 people were infected before the outbreak was brought under control in April.

However, the effects of measles may be with those individuals for quite some time. A new study finds that the measles virus erases the immune system’s memory, leaving patients vulnerable to other infectious diseases for up to three years afterward.

And researchers think that’s why the advent of vaccination against measles also seemed to reduce childhood deaths from other infectious diseases. It appears that vaccination protects against not just the measles virus, but also many other diseases.

When the measles virus strikes, it binds to, and then destroys, immune system cells called B-cells and T-cells. Both types of cells are vital to the body’s defense against disease. They do this by “remembering” past infections. The body carries around a set of B-cells and T-cells to match every infection it has ever encountered.

After a measles infection, it takes time for these cells to repopulate. Researchers have known that measles’ toll on these cells weakens patients’ immune defenses, but they thought that vulnerability only lasted for a few weeks.

However, in a 2012 study, researchers noticed that this wasn’t true in macaque monkeys. Monkeys who had measles and recovered started producing new B-cells and T-cells about a month later. But the new cells only had memory for the measles virus, not for any of the other infections the monkeys had been exposed to previously. The monkeys’ immune systems had amnesia, and it left them vulnerable to infectious diseases that otherwise might not have been a problem.

Princeton researcher Michael J. Mina and his colleagues wondered if the same thing would happen to humans who get measles. To test this, the researchers compared measles infection rates to the rate of deaths from other infectious diseases each year, from the decades before and the decades after measles vaccination became common, in England, Wales, the U.S., and Denmark.

But, more interestingly, they found that measles outbreaks increased death rates for two to three years after their appearance. In fact measles infection more strongly predicted deaths 28 months later than deaths that same year, the researchers report this week in Science.

“When a child gets infected with measles, it has been known for decades that during the weeks and months following infection the child is at very high risk of other infections. Our work further suggests that that elevated risk may last for years, or as long as it takes to retrain the immune system,” said Mina.

“Thus it is incredibly important for parents to understand the true danger of measles and to let go of any idea that measles is a benign infection,” he added.

As countries have introduced national measles vaccination campaigns, childhood mortality from all infectious diseases, not just measles, dropped by 50 percent in those countries. In the U.S., prior to measles vaccination in the mid-1960s, 15 children in every 100,000 died of infectious diseases (not counting measles). After the vaccine eradicated measles from the population, that death rate dropped to 6 children in every 100,000.

“When the secondary effects on other infectious disease mortality is taken into account, it appears that the measles vaccine is amongst the – if not the – single greatest public health intervention worldwide, resulting in the largest reduction in childhood deaths perhaps except for clean water and the whole field of antibiotic therapy,” said Mina.

More From Discover
Health
Walking vs. Running Benefits: Should You Walk or Run for Exercise?
Technology
What Is a Social Media Cleanse?
Health
What is the Purpose of Hiccuping?
Mind
Gut Bacteria's Role in Anxiety and Depression: It’s Not Just In Your Head
Mind
What Psilocybin Psychedelic Mushrooms Are Teaching Us About Human Consciousness
Health
Why Walking Might Be One of the Best Exercises For Health
Recommendations From Our Store
My Science ShopDiscover STEM Kits
My Science ShopDiscover 2022 Calendar
My Science ShopStrange Science
My Science ShopElements Flashcards
Shop Now
Stay Curious
Join
Our List