Me, myself, and Myanmar

I have spoken of my somewhat atypical, for a South Asian, genetic results before. Recently Dienekes performed some cluster analysis which confirmed the initial findings, while adding a little detail:

I am DOD075. The Southeast Asian component is modal in Malays, while the East Asian component is modal in the North Chinese. Vietnamese and Cambodians are mixed, with the former biased toward East Asian, and the latter Southeast Asian. My own proportions are more balanced, but there might be some noise in there. That being said, from what I have read of Southeast Asia it is highly likely that Burmese ethnicities will be between the Cambodians and Vietnamese in proportions. The Burmans were more shaped by the indigenous Mon-Khmer people than the Vietnamese were, though like the Vietnamese they seem to hail from southern China. My family is traditionally from eastern Bengal, and has been at various points the subjects of the kingdom of Tripura. Here's the Dodecad Indians, HapMap Gujaratis, and Behar et al. North Kannadans. The orange is Asian. Can you tell which one I am?

I'm pretty sure I'm second from the left. Not only am I atypically Asian, but I often show trace levels of other ancestral components in Dienekes' ADMIXTURE results (I suspect this is due a rather cosmopolitan great-grandfather who was from Delhi). In any case, so far I've had pretty general pointers of what's going on here. Unlike most people who get this stuff done, I found something interesting, though not too surprising (more on this later). But I ran into something which makes the case for specific Burmese origin even stronger. I got involved in BGA thanks to the urging of my friend Paul. Recently David of BGA sent me matches for various HGDP and other populations, as well as his own project samples, for extended haplotype blocks on the first 3 chromosomes. These are long stretches of correlated markers which haven't been broken apart by recombination. They may be indications of recent common ancestry between two individuals who share regions of genomic affinity. I decided to look at my matches. Also, there are several other South Asian individuals in the project. I don't know who they are, but it's clear they're South Asian. I was curious to compare myself to them in terms of my matches. First, I removed all the project samples. So basically I limited it to populations whose names I could perceive easily. Then I limited it to blocks of at least 100 bases. Below are the number of hits in the populations ordered. I matched some Pathans more than others, but I threw them all into a big pool. You can see some of the Genomes Unzipped guys, and Ilana Fisher & Kate Morely too.

The raw number of hits isn't really that informative. But obviously I'm going to be more open about my data than other peoples'. So here's what I did: I took the # of hits that I had for these populations, and calculated the ratio with the mean for all other South Asians. For example, the mean South Asian # of hits for Pathans without me was 75. I was 72. So my ratio was 0.96. Here's a table of the higher hit # groups for me, and my ratio with the South Asian mean: 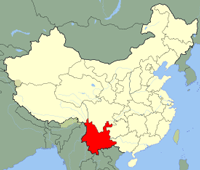 I bolded what I noticed to be way out of the norm. The mean number of hits for South Asians with the Naxi, aside from me, was 1.75. I had 19. The She and Yizu were also atypical. These are three HGDP populations. The Naxi and Yizu reside predominantly in Yunnan. The She are based further east in southern China. The connection with my East Asian ancestry seems pretty straightforward then. Here's a section on the origins of the Bamars in Wikipedia, the dominant group in Burma: "They migrated from the present day Yunnan in China into the Ayeyarwady river valley in Upper Burma about 1200–1500 years ago. Over the last millennium, they have largely replaced/absorbed the Mon and the earlier Pyu, ethnic groups that originally dominated the Ayeyarwady valley." I believe that ~1/6th of my ancestry had something to do with the massive Völkerwanderung which brought the various ethnic groups dominant in Burma, Thailand, Laos and Vietnam to their current locations. Only Cambodia managed to maintain a native elite culture, though the modern Khmer polity was being crushed between Thailand and Vietnam when the French colonial authorities froze the current borders roughly in place. ~1/6th is not trivial, but it isn't quite one grandparent either. So how did I come by this? It could just be a natural component of the eastern Bengali genetic landscape. I wasn't too surprised by the results because so many of my extended family members do resemble people from Southeast Asia. I myself have a few characteristics which are not typical for South Asians (e.g., very little body hair). But I have reason to suspect that there might be some recent admixture. All my grandparents were Muslim, but I know the original Hindu caste origins of two of them (one of them was from a family who converted when she was an infant). They were unlikely to have had recent admixture. My maternal grandmother was only half-Bengali in terms of recent ancestry. But her father was from Delhi, from that city's Muslim elite. That leaves my paternal grandfather, who died just before I was born. No photos of him were ever taken, but I was always told that his physical appearance was not typical for a Bengali. He was tall and relatively light in complexion. His title as a Khan came down through his paternal lineage, and was a legacy of the late Mughal (really, de facto post-Mughal by then from what I can gather) period. My paternal Y chromosomal lineage is R1a1a*, not an eastern haplogroup at all. I had always assumed that like my great-grandfather on my mother's side my paternal grandfather was from the mixed heritage Muslim upper class family. I now strongly suspect that his background was more exotic than my family has let on, or at least more than they suspected. It turns out that his family may have come to Bengal from Assam, to the northeast. Assam has an even stronger Tibeto-Burman presence that eastern Bengal. My paternal grandfather may have been from a family which mixed with the Tibeto-Burman tribal people in Assam, some of whom converted to Islam and assimilated to a Bengali identity. I find this rather interesting, and am curious as to the omission. My own personal experience discussing the eastern element of my ancestry is that many South Asians are just confused by the whole idea. Persian or Scythian ancestors they can grok. Burmese, not so much. I will know more soon. I have had my parents typed, and will be able to ascertain if the eastern element is more from my father as I suspect, or whether it is from both parents. If the latter is the case, then there need be no exotic story. Rather, eastern Bengal is simply on the clinal continuum of allele frequencies which differentiate South Asia from Southeast Asia.