To heal the brain, scientists are trying to poke through the shield that isolates it from the rest of the body. 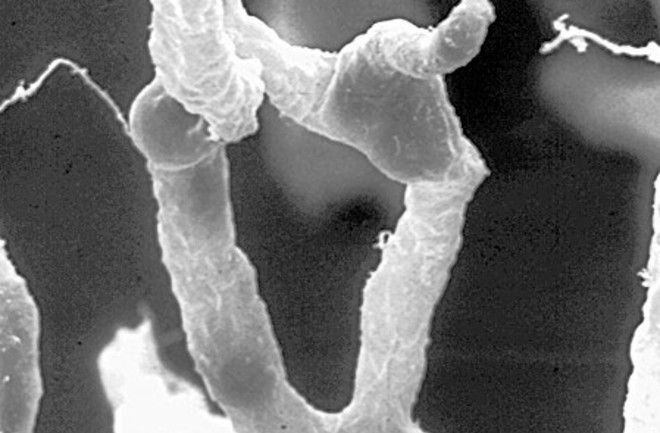 Neuroscientists these days regularly make spectacular discoveries about how the brain gets sick. They know much more today about brain cancer, Alzheimer’s disease, Parkinson’s disease, and a host of other neurological disorders than they did just a few years ago. And from such discoveries come all sorts of encouraging possibilities for treating or even curing these diseases. If only we could break down some rogue protein or bind a drug to a troublesome receptor, it seems as if all would be well. There’s just one little hitch: Even if scientists invented the perfect cure, they probably couldn’t get it into the brain to do its work.

Drugs can cross easily out of the bloodstream into most organs of the body. The brain is a glaring exception because it is protected by an intricate shield known as the blood-brain barrier. The blood-brain barrier serves a vital function: It keeps our brains free for the most part from infections or toxins that find their way into other parts of the body. Unfortunately, the brain’s barrier also gets in the way of most medicines that could help heal it. Neurologists sometimes open up the skull and inject drugs directly. That brute-force approach can work in an emergency, but it is hardly a practical solution for people who need to take drugs every day at home.

There is reason for hope that the blood-brain barrier will not block medicine’s path forever, though. Some scientists are working on ways to penetrate it—either by sneaking drugs through the barrier or by temporarily opening channels through which the drugs can pass.

The word barrier sounds formidable, but scientists didn’t even know the blood-brain barrier existed until they discovered it by accident just over a century ago. In the 1800s biologists found they could see the microscopic structure of the body more clearly if they injected tissues with special dyes. In 1885 German biologist Paul Ehrlich (best known for curing syphilis) discovered that if he injected a dye into the abdomen of animals, he could color all their organs—all except the brain. In 1913 one of Ehrlich’s students, Edwin Goldmann, followed up by injecting dye into the nervous system. This time the brain, and only the brain, turned blue. He concluded that there had to be an invisible barrier separating the brain from the rest of the body.

Other researchers discovered that cells lining blood vessels in the brain are welded together, so tightly bound that large molecules cannot slip between them and pass from the blood into the brain. A fatty coating on the cells further prevents most molecules from slipping into the cells themselves. Yet somehow the brain can still manage to get certain large biomolecules, such as hormones, past the barrier.

It wasn’t until 1980 that William Pardridge, a pharmaceutical scientist at the University of California, Los Angeles, found a crucial clue as to how the brain does it. He determined that epithelial cells lining the brain’s blood vessel walls contain a surface protein, or receptor, that can snag insulin, the hormone essential for metabolizing carbohydrates and fats. As Pardridge studied the protein more carefully, he realized that it transports essential insulin into the cell and then out the other side, from which point the hormone travels into the brain to help regulate eating behavior.

Soon scientists were finding other gateways in the blood-brain barrier, which turns out to be less of a barrier than a filter, providing entrée to molecules the brain requires and shutting out most of those that would do it harm. It is a smart filter at that: The cells lining the brain’s blood vessels can build extra proteins for grabbing glucose if the brain needs a boost and can also destroy some of the proteins to dial the flow back down.

Next page: Trojan Horses into the brain

These days, researchers unraveling the workings of the brain’s filter are trying to find similar kinds of passage­ways so they can get drugs past it too. Pardridge and his colleagues wondered if they could slip therapeutic compounds into the brain with the help of insulin and transferrin, a molecule that moves iron from place to place; both insulin and transferrin are granted free passage across the blood-brain barrier. To turn ordinary insulin and transferrin into Trojan Horses that can sneak other molecules inside, they engineered antibodies that could grab onto them. Next they welded drugs onto the antibodies.

In one experiment last year, the team attached erythropoietin, a compound that can help heal injured cells. They then injected the antibody-erythropoietin combination into the bloodstream of mice. The compound molecules made their way to the mice’s brains. There, the antibody was caught by transferrin transporters, which drew it—along with the erythropoietin—through the blood vessel walls and into the brain.

In May researchers at the biotech company Genentech unveiled another way to trick the brain into letting down its guard. Instead of attaching a drug to an antibody, they made the antibody itself their drug. The group exploited the fact that antibodies are shaped roughly like the letter Y, with the two arms able to latch onto proteins. Which kind of protein they grab depends on the particular nooks and crannies in each arm. The Genentech researchers engineered one of the arms to seize a receptor that normally snags transferrin. With the receptor in tow, the antibody was able to pass through the blood-brain barrier. Once it was inside, the other arm swung into action. That arm of the antibody had been engineered to grab and block a protein called Beta-secretase, or bace1, which helps produce the plaques implicated in Alzheimer’s disease.

Biomedical engineer Elisa Konofagou at Columbia University is pursuing another way to sneak drugs into the brain, by drilling microscopic channels with a high-intensity ultrasound device similar to the therapeutic ultrasound doctors use to dislodge kidney stones. When pointed at the brains of mice, such vibrations might loosen the seals between the cells of the blood vessels inside, she suspected. Drugs could then pass through the barrier.

To boost the strength of the ultrasound, Konofagou injected the mice with a saline solution loaded with microscopic gas bubbles. (Previous research by other scientists had shown that ultrasound makes the bubbles resonate thousands of times a milli­second.) Rather than try to open up the blood-brain barrier throughout the brain, Konofagou and her colleagues focused a beam to zap a small patch. As they had hoped, a narrow ultrasound beam loosened the blood vessel walls in part of a mouse’s brain. Drugs circulating through the mouse’s blood were then able to slip through at that location. After the ultrasound treatment was finished, the blood-brain barrier closed back up.

Those experiments on mice left open a number of questions about whether the ultrasound method would work on humans, too. People have much thicker skulls than mice do, for one thing, so it might be necessary to use stronger sound waves to reach the blood-brain barrier inside. But really strong waves might end up cooking the brain’s tissue instead of judiciously loosening a blood vessel wall.

Recently Konofagou and her colleagues got closer to an answer by trying out their ultrasound technique on five monkeys. In July they reported that the ultrasound was able to pass through the monkeys’ skulls and almost instantly loosen small sections of the animals’ blood-brain barrier. The scientists kept careful tabs on the monkeys to see if the procedure did any lasting damage. They found that the leaks in the blood-brain barrier closed up in a matter of hours. Afterward, the test monkeys showed no signs of trouble in their behavior. They could move their arms and legs normally, they could still pass vision tests, and they slept well.

Nevertheless, ultrasound therapy and Trojan Horse molecules will not be showing up in doctors’ offices anytime soon. Both approaches still require a great deal of research before they are judged safe and effective for human use. The research is also expensive, and it has attracted only limited funding because it veers so far from conventional therapies.

But with the blood-brain barrier blocking so many potential drug therapies, somebody will figure out a practical way to tear down the wall. Poking holes in that fortress and forging portals of entry are prerequisites for treating many of the brain’s most intransigent and devastating ills.