Marriage On Its Way Towards Losing that Happiness Edge 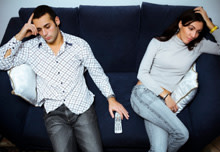 Proponents of marriage like to toss around the statistic that married people (and married men in particular) are happier and healthier than the wretched ranks of the unwed. But new research has found that the happiness/health gap is narrowing, not because the married crew is losing its happy glow (though that may indeed be occurring), but because the single component is getting happier. The study, led by Hui Liu, assistant professor of sociology at Michigan State University, used data from the National Health Interview Survey from 1972 to 2003. The researchers found that while the self-reported health of the married is "still better than that of the never-married," the "gap has closed considerably." Single women shouldn't rejoice just yet: The uptick was due overwhelmingly to improvements in the health of never-married men. Liu thinks that this result may be "partly because never-married men have greater access to social resources and support that historically were found in a spouse." (Female robots, perhaps? Or Internet porn?) Still, single women also saw an increase, and the singles health boost also spread across racial lines to both blacks and whites. For those with one or more marriages in their past, the results aren't as clear—the health of the the divorced, widowed, and separated worsened from 1972 to 2003 relative to their married peers (though whether entering into a second or third marriage increased your health wasn't mentioned). So maybe the statistic should be revised to something like "first marriages and single-malehood, and possibly second and third marriages will make you happier and healthier." Happy dating! Image: iStockPhoto