Laissez les bons temps rouler! Tomorrow is the final and momentous hurrah of the Carnival season, which culminates with Mardi Gras, otherwise known as Fat Tuesday. In New Orleans, the city I call home, Carnival is a season of festivities, decadence, and tradition, one that is celebrated amongst neighbours and visitors alike. Our revelry is an egalitarian one - everyone is welcome to come witness and participate in Carnival. But for over a century, just a couple of hours away from the Crescent City, there lived a community of exiles, quarantined and barred from society, who were forced to forge their own Mardi Gras traditions. In honor of the biggest party of the year, I'm republishing my article on the celebration of Mardi Gras at one of America's last leper colonies, just a few hours up the Mississippi river in Carville, Louisiana. 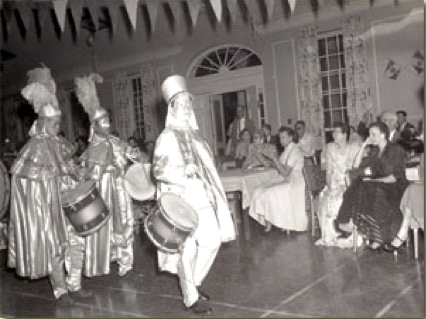 In 1894, on an abandoned sugar plantation located just outside of Baton Rouge in the small community of Carville, Louisiana, the doors to a new facility dedicated to the quarantine of leprosy were opened. Ostracized by their families and communities, men and women were shipped in barges from New Orleans along the Mississippi River to the Louisiana Leper Home where they were housed in former slave quarters (1). Some were handcuffed on the barges, forcibly exiled from their homes, families, and the former lives they knew, to be imprisoned and shunned by society (2). The leprosarium would operate for over a century and serve as the last hospital in the industrialized world completely dedicated to the "treatment" of leprosy. Catholic nuns associated with the Daughters of Charity of St. Vincent de Paul would serve as their caretakers. 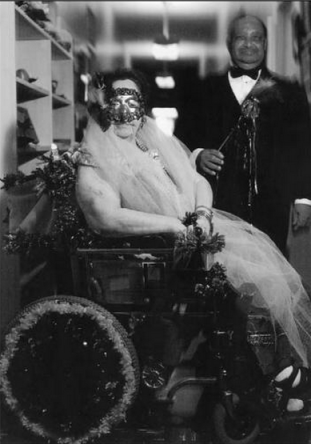 Just as residents of Louisiana don masks and costumes to watch and delight in the sights of the parades during Carnival, so too would the quarantined residents of the leprosarium. Concealing their identity and disfigurements, the residents of the Louisiana Leper Home would have their own day to celebrate Mardi Gras, liberated socially and psychologically from their disfiguring disease.

Miniature floats rode in their "Krewe of Carville" parade, constructed from bicycles, wheelchairs and carts scavenged throughout the facility. The King and Queen of Mardi Gras were elected yearly and proudly celebrated at the carnival ball. In 1995, an observer of the Carville festivities wrote that the doubloons - collectible aluminium coins specific to each Krewe - were imprinted with the outline of an armadillo, the animal now known as the natural reservoir of Mycobacterium leprae, the bacteria that causes leprosy (1).

In her essay on Mardi Gras at the leprosarium, Marcia Gaudet writes,

To act carnivalesque is to be allowed to be 'abnormal' for a while. Paradoxically, to celebrate Mardi Gras, like any other masquerade holidays, is normative - it is not only allowable but even expected that one will participate in the seasonal customs. Thus, for people who are already stigmatized as 'abnormal' in society, the masks and the occasion allow an opportunity to engage in normative behavior, to act 'normal.' (1)

In 1999, the facility closed its doors to receiving resident patients, though a few long-term patients remain on the site out of comfort and security after their many decades of quarantine on the site. The facility now serves as a museum and a research center for leprosy, its masques, balls and floats no more than echoes in the past.

The website for the National Hansen's Disease Museum currently operated by the US Department of Health and Human Services. The museum is one of the finest I've been to in Louisiana.

Note: A big thank you to Rosemarie Robertson at the Louisiana Office of Public Health for the Mardi Gras picture of parading drummers.