Monoamine oxidase A gene (MAOA) has earned the nickname "warrior gene" because it has been linked to aggression in observational and survey-based studies. However, no controlled experimental studies have tested whether the warrior gene actually drives behavioral manifestations of these tendencies. We report an experiment, synthesizing work in psychology and behavioral economics, which demonstrates that aggression occurs with greater intensity and frequency as provocation is experimentally manipulated upwards, especially among low activity MAOA (MAOA-L) subjects. In this study, subjects paid to punish those they believed had taken money from them by administering varying amounts of unpleasantly hot (spicy) sauce to their opponent. There is some evidence of a main effect for genotype and some evidence for a gene by environment interaction, such that MAOA is less associated with the occurrence of aggression in a low provocation condition, but significantly predicts such behavior in a high provocation situation. This new evidence for genetic influences on aggression and punishment behavior complicates characterizations of humans as "altruistic" punishers and supports theories of cooperation that propose mixed strategies in the population. It also suggests important implications for the role of individual variance in genetic factors contributing to everyday behaviors and decisions.

I blogged this at Gene Expression Classic the other day, focusing on the "big picture" in terms of evolution. But I thought it was worth taking a closer look at the paper itself. The authors note a few issues in relation to MAOA, in particular for those who are known to have "low activity" genetic variants (MAOA-L): 1) Gene-environment interaction effects whereby abused children with MAOA-L are much more likely to become abusers than those who are MAOA-H (non-abused children show no difference). 2) Neuroimaging which shows greater reactivity in the amygdala and lower activity in the regulatory prefrontal areas during emotional arousal for MAOA-L individuals. 3) MAOA's interaction with various neurotransmitters (or specific, the gene product's interaction). 4) A family study where the subjects were generally criminal in inclination, and, were to be mostly MAOA-L. The design of this study was simple. The authors took males and put them in a "game" scenario where they lost either 20% or 80% of earnings due to performance on a vocabulary test. Then they were told that the individual who took their earnings could be punished by administering a serving of hot sauce which they did not like the taste of (yes, this part confuses me too!). But, the administering of the hot sauce came at a cost to the punisher in direct proportion to serving size. In other words the psychic satisfaction would be balanced by the fact that the punisher would the poorer for it. The authors interpret this as a good measure of aggression, but I would suggest that it could also be a proxy for lack of impulse control and high time preference (these are probably all closely related behaviors). In any case, here's a figure which shows the top line results: 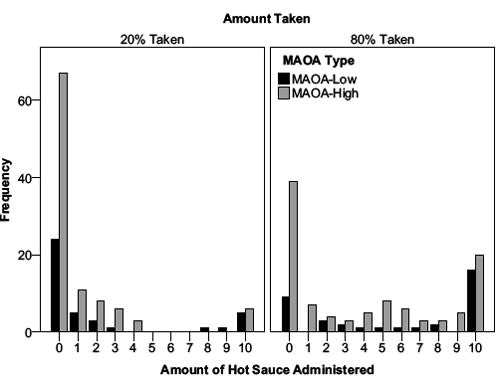 As you can see, a much higher frequency of MAOA-L individuals opted to punish at a cost to themselves than MAOA-H when most of the groups' earnings were being taken. The figure is somewhat confusing because the majority of individuals in the study were MAOA-H, but if you compare within category note the skew among the MAOA-L group toward high levels of hot sauce in reaction to having 80% of their takings removed, after which their reward would be diminished even further. The authors do a fair number of statistical manipulations and don't quite come to the magical p-value of 0.05 for all their hypotheses, but I don't think that's so important. The details of whether there is a "main effect" (MAOA variation being relevant independent to the modulation of the environment, the proportion taken of winnings) or just a gene-environment interaction is less important than confirming past research which shows the importance of MAOA in mediating behavior.