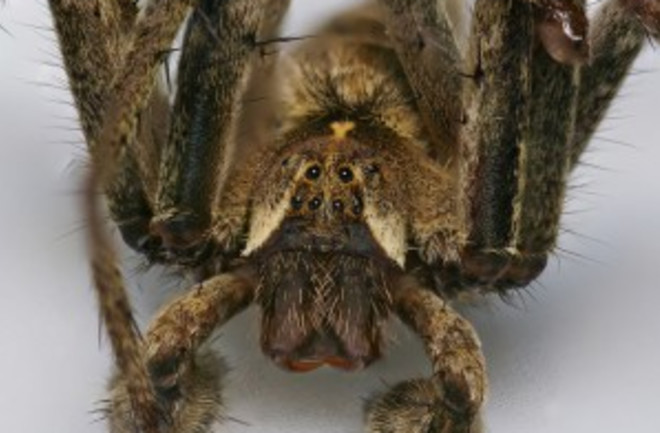 Spider sex can be pretty complicated... and kinky. Take wolf spiders, for example. It's well known that female wolf spiders have a predilection for eating their partners during courtship, a behavior known as sexual cannibalism. Males, in turn, have developed their own tactics to avoid being consumed while still getting it on. This includes offering a "nuptial gift" of a tasty snack--for example, a dead fly or an eggsac from another female. The gift has been thought to help curb the female's appetite, and/or to function as a physical shield that the male can hide behind. But, the action doesn't stop there! This study, from 2006, describes a separate behavior adopted by male wolf spiders to avoid sexual cannibalism: playing dead! Known in scientific circles as "thanatosis," it seems pretty effective for the male wolf spider: 100% of males who played dead were successful at copulating, versus only 58% of those who did not employ thanatosis. And if you are thinking of adding thanatosis to your own courtship ritual, here are some tips on how to go about it:

Females frequently interrupted copulations and could be aggressive towards males while attempting to depart with the gift. In response to interruptions, the male retained hold of the gift with his chelicerae and entered thanatosis (82%, n=28). When the female resumed consumption, the male resumed copulation.

If you need help thinking of a good "nuptial gift" for your own mate, might we suggest an extra large pizza?Death feigning in the face of sexual cannibalism. "Pre-copulatory sexual cannibalism by females affects male and female reproductive success in profoundly different ways, with the females benefiting from a meal and the male facing the risk of not reproducing at all. This sexual conflict predicts evolution of traits to avoid cannibalism and ensure male reproductive success. We show that males of the nuptial gift-giving spider Pisaura mirabilis display a remarkable death feigning behaviour--thanatosis--as part of the courtship prior to mating with potentially cannibalistic females. Thanatosis is a widespread anti-predator strategy; however, it is exceptional in the context of sexual selection. When the female approached a gift-displaying male, she usually showed interest in the gift but would sometimes attack the male, and at this potentially dangerous moment the male could 'drop dead'. When entering thanatosis, the male would collapse and remain completely motionless while retaining hold of the gift so it was held simultaneously by both mates. When the female initiated consumption of the gift, the male cautiously 'came to life' and initiated copulation. Death feigning males were more successful in gaining copulations, but did not have prolonged copulations. We propose that death feigning evolved as an adaptive male mating strategy in conjunction with nuptial gift giving under the risk of being victimized by females." Related content: Spiders perform female genital mutilation to ensure faithfulness.Hard core spiders fight better after self-castration.If you are afraid of spiders, don’t read this…and PLEASE don’t look at the pictures.