Mad Cow Fears Keep Euro Sperm Out of the U.S. 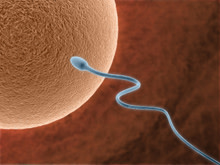 Soon, any woman hoping for a smart, tall Swede to be her sperm donor might just have to leave the U.S. to make it happen. Since 2005, the Food and Drug Administration has made it essentially impossible to import sperm donations from Europe into the United States, the Washington Post reports, because of fears over the pathogens that cause mad cow disease and its human equivalent, Creutzfeldt-Jakob disease. And now, the last of the European sperm we imported before the embargo will soon be gone. The U.S. government has enacted many safeguards against CJD, which is incurable and fatal. People who lived in the U.K. for more than three months between 1980 and 1996 aren't allowed to give blood, for instance. The most important rules to keeping the disease out of humans are ones like the FDA proposed in 2005 to make sure animal feed doesn't contain any of their own brains or spinal material. However, a person is more likely to be killed by lightning than they are to catch CJD through a sperm donation, say the scientists involved. Transmitting the disease through sperm is theoretically possible, but no case has ever been recorded, the Post says. Despite the minuscule risk, it's easy to see why the government would be over-cautious: if a theoretical transmission ever did happen, it could affect both the mother and the child. And there's plenty of perfectly good donated sperm already sitting in vials inside U.S. borders. But try telling that to the women willing to shell out hundreds—or thousands—of dollars because they have their heart set on a Scandinavian man's DNA, and a blond-haired, blue-eyed baby. Image: iStockphoto