The CDC now estimates that 300,000 Americans are infected with Lyme — and other tick-borne illnesses are a growing threat as well. 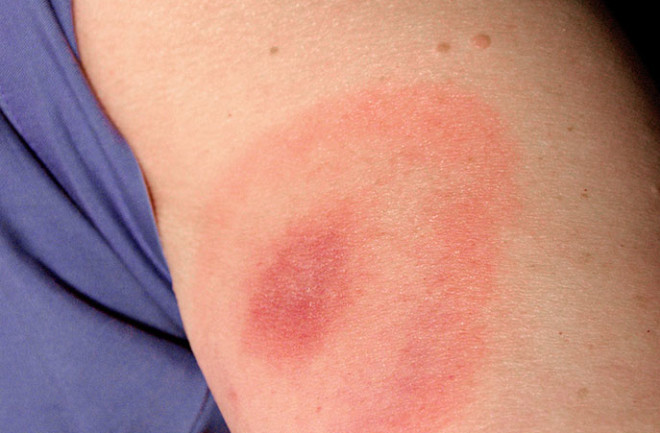 The erythema migrans rash is a classic, though not universal, sign of Lyme disease. | James Gathany/CDC

When the Centers for Disease Control and Prevention (CDC) estimated last summer that the number of people diagnosed with Lyme disease each year was 300,000 — 10 times as high as the official counts — the agency must have expected headlines, and it got them. The alarmingly high figure justified assertions by patient advocacy groups that the 30,000 cases reported annually were just the tip of the iceberg.

Lyme disease is caused by a bacterium, Borrelia burgdorferi, which is transmitted by black-legged ticks. Infection results in fever, headache, fatigue and, in many cases, a distinctive oval rash called an erythema migrans. Untreated, Lyme may advance to painful complications of the joints and nervous system. The disease is concentrated in the Northeast and upper Midwest, and in parts of the Pacific Northwest. The CDC is notified of cases by doctors, laboratories and local health departments.

Despite the new numbers, epidemiologist Paul Mead, in charge of the agency’s Lyme program, challenges the idea that there’s been a “whopping surge” in Lyme disease. The CDC has long known that “the physician may not fill out the form, or the lab doesn’t submit its form properly,” says Mead. But only now do researchers have the evidence to back up the claim.

To get more accurate numbers, the CDC team conducted three overlapping surveys. In one, they examined medical insurance claims for 22 million people over six years. In the second, they checked the records of seven major commercial labs that run blood tests for Lyme. And in the third, they polled representative Americans by telephone, asking if they’d been diagnosed.

If the actual number of new cases each year is around 300,000, it’s “a tremendous public health problem,” says Mead. Although the incidence did not jump tenfold overnight, the problem has grown steadily worse in the 30 years since the disease was identified. “Tick-borne illnesses are on the rise,” says Mead, “and we’re having a hard time figuring out what to do about them.”

In January, tick-borne disease expert Peter Krause of Yale University and colleagues reported a new Lyme-like disease in the United States. After discovering the first human cases in Russia in 2011, Krause now thinks the disease — still too new to be named — could exist wherever hard-bodied ticks transmit Lyme.

The bacterial culprit, Borrelia miyamotoi, enters a person’s bloodstream via tick bite and elicits flulike symptoms similar to Lyme disease, but with a relapsing fever instead of the telltale bulls-eye rash. The fever develops as a person’s immune system designs and cranks out an antibody specific to the bacteria. But B. miyamotoi keeps changing outer-surface proteins, and the fever returns each time the immune system has to scramble to make a new antibody.

Although B. miyamotoi is less common than Lyme, it could turn out to be more insidious in one sense: While the Lyme bacteria die along with its host tick, B. miyamotoi is transmitted from a female tick to her eggs. Thus, the relapsing fever can be spread not only by adult and nymphal (adolescent) ticks, but also by the bite of newborn larvae.

Reporting in the New England Journal of Medicine, Krause says the cyclic and nonspecific symptoms of B. miyamotoi are problematic for doctors trying to identify the disease and for patients seeking treatment. But he expects diagnostic tests now in development will be widely available in a matter of months. — Breanna Draxler

In August, a teenager in the Hudson Valley region of New York died from tick-borne Powassan virus, according to preliminary findings. The precise cause of death was encephalitis, an inflammation of the brain.

In research published just a month earlier, Richard Ostfeld of the Cary Institute of Ecosystem Studies and colleagues reported that the Powassan virus inhabits up to 6 percent of black-legged ticks in the region.

In terms of cases, “Powassan is dwarfed by Lyme disease,” says Ostfeld, “but the severity is so much greater. Your risk of dying is at least 10 percent. Your risk of being permanently disabled is 50 percent. And the tick can transmit the virus in 15 minutes. The good news is that it’s extremely rare.” — Jeff Wheelwright

[This article originally appeared in print as "Ten Times the Lyme."]