In the wake of yesterday's review of a paper on heritable variance in trait preferences realized in romantic partners I couldn't help but be intrigued by this new study out of PLoS ONE, Evolutionary History of Hunter-Gatherer Marriage Practices. It's actually a pretty thin piece of work in all honesty from what I can tell. They wanted to query ancestral ranges of marriage patterns by mapping the cultural variation in customs onto a phylogenetic tree. To generate that tree they took mtDNA sequences, which to me seems kind of old school. Using the cultural patterns present in living hunter-gatherer groups they presumed they could infer the ancestral state. So combining these two sources of data they generated this: 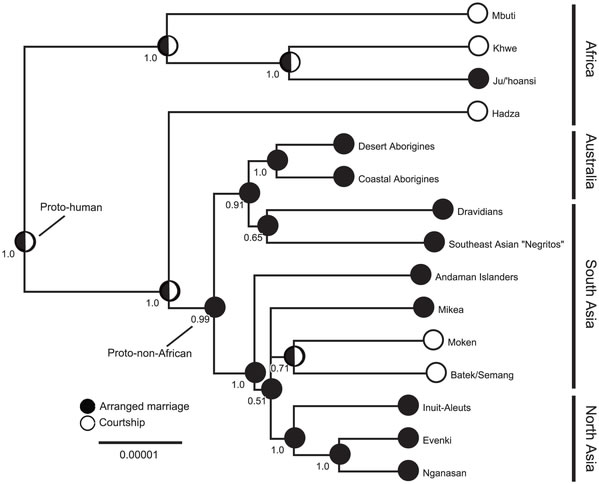 Arranged marriages are inferred to go back at least to first modern human migrations out of Africa. Reconstructions are equivocal on whether or not earlier human marriages were arranged because several African hunter-gatherers have courtship marriages. Phylogenetic reconstructions suggest that marriages in early ancestral human societies probably had low levels of polygyny (low reproductive skew) and reciprocal exchanges between the families of marital partners (i.e., brideservice or brideprice).

There's an immediate problem in that "binning" or categorizing these customs as "arranged" vs. "courtship" is somewhat artificial to my mind. That's a perennial issue in anthropology, so setting that aside this is actually an interesting question if you could adduce the ancestral state in a clear and distinct manner. A book like The Mating Mind argues that sexual selection driven by free choice is the major driver of human evolution. But if marriage is arranged by one's family then that significantly weakens the selective effect. Yes, theoretically the parents and offspring could have perfectly aligned preferences, but I doubt that's what's going on. As it is I probably do lean toward the model of mate-choice outlined by Geoffrey Miller in The Mating Mind. I've long held that the rise of powerful extended patrilineages eliminated the relatively level playing field between men and women which may have existed in "small-scale" societies. This does not mean that hunter-gatherers were and are gender egalitarian in a way we'd understand them, but I doubt that you'd ever see the transformation of women into de facto property of powerful groups of men which occurred with upper class Athenian women or modern Saudi women. I think that sort of mobilization of collective power to control other humans and bind social institutions with marriage ties is a feature of mass society and agricultural civilization. In particular, of higher status lineages strongly associated with the distinctive institutions of a given society. By this, I mean that a medieval or early modern European aristocrat may have had to marry for family considerations, but the peasant was often constrained by more prosaic practicalities. He or she had relative free choice once the variables of distance and social class were accounted for. If one does not have property at stake marriage can be much more of an individual affair. Ultimately the plausibility of the range of answers to this sort of question comes down to one thing for me: why crazy love? I don't think romantic love is a cultural invention. It's a neurological phenomenon which is easily evoked given the right conditions. The software comes pre-installed on the hardware, you don't need to download it. My own opinion emerges partly out of personal experience. My family comes from a society where arranged marriage is normal, especially among elite lineages. But love happens, and people have strong individual preferences. If they are compliant they will suppress these individual urges for what they know to be good, prudent, and respectable. Oftentimes they may not have a practical choice. The parents and older siblings who make the decisions which go against the instinctive and romantic preferences of the subordinate parties themselves are not lacking in feeling, and understand what they're doing, and they may have gone through the same process. In many societies individual action is marginalized in favor of the interests and preferences of the family, which is ultimately dominated by older individuals within the kinship network. The interests of the firm and the employee do not always perfectly align! 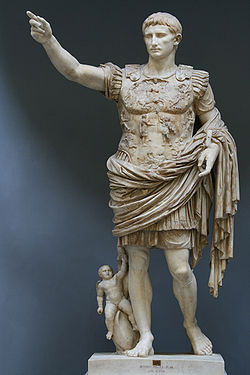 But this sort of social water running up the psychological hill, that is, the suppression of individual preference in the interests of collective rationality, needs some fuel to drive the process. You need something forcing individuals to cede their own range of options and accept that others will make the right decisions. In a pre-modern world I think that the fuel for that force consists of the rents stolen from the populace by elites. The rational for Augustus' marriage to Scribonia

was clearly different from that of his marriage to Livia

. As a young man Augustus needed the money and connections which marriage with the older Scribonia would provide. Money and connections which ultimately emerged from the protection racket that was the late Republican aristocracy. As an older man Augustus' was powerful enough to follow is hearts' desire by expending the accumulated capital he'd built up, in part by operating within the system so long (instead of fighting his rival Marc Antony he allied with him until the triumvirate was not feasible). The historical example above shows that the dichotomy between courtship and arranged marriage can manifest within an individual's lifetime based on their context. I believe that if arranged marriages where individuals had marginal choice were overwhelmingly dominant across human history and prehistory than the psychological tension imposed by the preference for personal choice should slowly be eliminated by natural selection. From what I know that does not seem to be so. I infer from that that a mix of social customs was always operating, but that arranged marriage tended to become dominant only in more complex societies with enough inequality and monopolization of marginal surplus by some lineages to "fuel" the decisions of firms at cross and counter-purposes to individuals. As for our ancestral hominin bands, I believe their bias toward courtship and arrangement was the same as our own. In a situation of material surplus there is more to fight over, and inequality may arise in the power hierarchy. When things matter, people become pawns. In flatter social contexts free choice would be given more room to operate, as there would be less to fight over.