How diet, exercise and brain games could help. 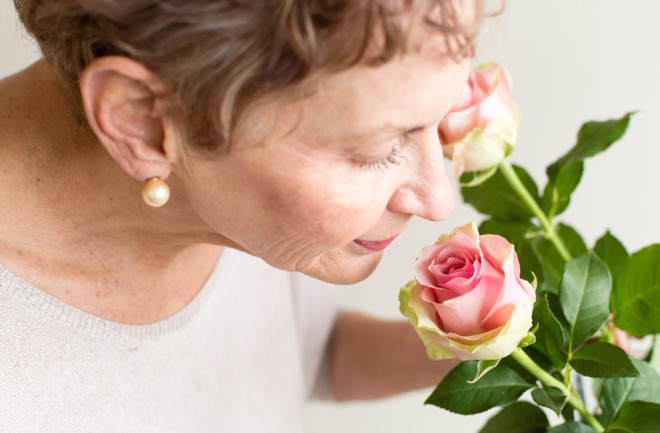 The nerves in our nasal cavity send signals to our brain to alert us to what we’re smelling. As we age, our sight, hearing and sense of smell diminishes. When we lose our ability to distinguish one odor from another, say vanilla versus cinnamon, it can be an early sign of dementia or Parkinson’s disease, a 2018 study in Current Asthma and Allergy Reports and a 2016 study in Neurology found.

We can lose our sense of smell temporarily, such as from a viral infection like cold, flu or COVID-19, but it usually returns. Poor odor identification in adults – the ability to distinguish one scent from another versus the overall ability to smell – has been linked to a significant increase in the risk of later dementia, according to a 2020 study in Frontiers in Neuroscience.

Loss of the ability to identify smells signals a dysfunction in the region of the brain responsible for identifying and naming smells, says Devangere P. Devanand, professor of psychiatry and neurology, Columbia University Irving Medical Center. But more research is underway.

“We don’t know enough about what changes in smell might mean for a person’s risk overall,” Devanand says. About 4 percent of the population, since childhood, can’t identify odors, but that has nothing to do with dementia, he adds.

When a patient notices a decline in their ability to identify odors, Devanand presents them with a test that includes 12 scratch and sniff samples; they’re asked to identify scents such as pizza, apple, coffee and gasoline. The tests are typically given when a patient or family member notices mild deficits in their memory and odor identification, he says. If someone scores poorly on the odor identification test and shows memory loss during testing, that would trigger further testing to confirm diagnosis. If they score well on an odor identification test and okay on a memory test, the patient can wait and follow up later or, if they’re still worried, undergo further testing, he says.

While there’s no cure for dementia or Parkinson’s, the odor identification test can lead to early diagnosis. An ear, nose and throat doctor can look at the patient’s nasal tissues under a microscope and look for telltale signs of Alzheimer’s or another type of dementia, says Johannes Reisert, a faculty member with Philadelphia’s Monell Center, an independent, nonprofit scientific institute dedicated to research on the senses of taste and smell. Because olfactory decline precedes other symptoms, he says, “that could lead to an earlier diagnosis.”

Early diagnosis “is incredibly important,” says Heather Snyder, vice president of medical and scientific relations with the Alzheimer’s Association. It allows people to create their plans for their healthcare and personal finances. Participating in clinical trials is more doable at the early stages of the disease, and participating in trials gives patients access to emerging treatments “that may be appropriate at an earlier stage of the disease,” she says.

It’s helpful for family members to know about the diagnosis, because some dementia patients’ behavior changes, Devanand says. “Family members get really upset when they don’t realize this is what’s going on.” Those who lose smell identification should talk to a doctor who takes their concerns seriously and investigates them further, he says.

“There’s no established way to delay the onset of dementia. There are things people can do which may have a very small effect,” Devanand says, especially regular exercising, eating the Mediterranean diet and stimulating the brain.

“Physical exercise and fitness are also important. We don’t know if improving fitness, which has been shown to have a small effect on cognitive performance, decreases the risk of small or mini-strokes in the brain or if it is more specific to reducing the risk of developing Alzheimer’s disease,” Devanand says.

Specifically, guidelines call for at least 30 minutes of moderately intensive exercise at least three days a week, says Carolyn Fredericks, Yale Medicine neurologist. The studies showing a cognitive benefit were based on the kind of exercise that makes you breathe heavily and gets your heart pumping, she says.

The Mediterranean diet has also been shown to help cognition, Fredericks says. She advises her patients to eat like they would if vacationing on the coast of Italy – lots of fish, lean proteins, beans, vegetables containing protein, fruits and dark, leafy greens “which seem to have specific benefits for preserving cognitive function. And olive oil rather than butter, and whole grains,” she says. “It’s really not a restrictive diet at all, but it’s more a style of eating that seems to be really good for the brain.”

Again, Devanand says, it’s not clear if the benefits from this diet decreases the risk of small strokes, which occur with aging and can affect cognition, or whether the diet directly prevents or delays Alzheimer’s disease.

While studies have been done involving brain games, anything people do to exercise and challenge their brains and increase brain activity “helps reduce the likelihood of being diagnosed with the disease,” he says. Learning new skills, keeping your brain engaged and socializing contribute to cognition. Exercising the brain “builds up cognitive reserves. You have more intellectual ability to the extent that it compensates for the memory loss you’re facing,” Devanand says. “It’s really a way to improve your resilience when you get the disease.”

Medications approved for treating Alzheimer’s have improved cognitive ability, including memory test performance, to a very small degree compared to a placebo in clinical trials, Devanand says, citing a recent study published in June 2021 in Neuropharmacology. However, the drugs used for treating Alzheimer’s, he says, “don’t really change the long-term course of the illness.”

The controversial aducanumab, which received accelerated approval from the U.S. Food and Drug Administration, has been shown in two studies to reduce plaque buildup in the brain, he says, but clinical measures showed a small effect in one study and no effects in the other study. Medical practices, including Devanand’s, the Cleveland Clinic and the Mount Sinai Health System in New York said they wouldn’t prescribe it.