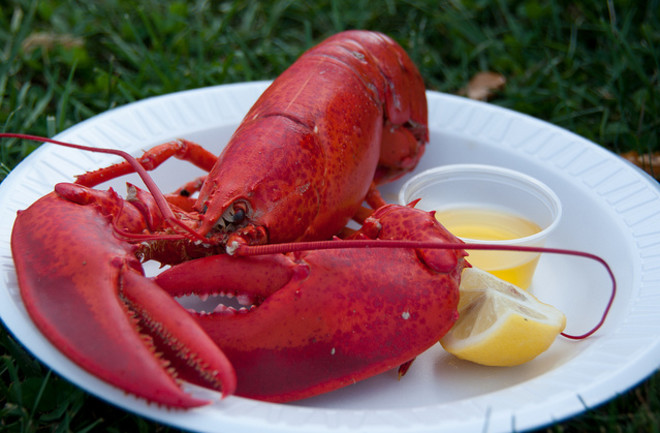 They lurk in the depths of the ocean, feasting on the remains of their fallen neighbors. With stalked eyes, muddy coloring, and large predatory claws, they’re reminiscent of insects and are admittedly neither cute nor cuddly. They’re ancient, they’re cannibalistic, and they’re delicious dipped in lemon and butter. They’re the beloved lobsters, a crustacean sensation. Lobsters have spent decades clawing their way up social and culinary ranks, rising from their status of an aquatic beach pest to the iconic culinary symbol of New England as we know them today.

In early America, lobsters would wash up on Boston beaches after storms and litter the shores with their decomposing bodies. Piles of carcasses would collect and rot, prompting frustrated New Englanders to put them to good use. The festering carcasses were harvested and ground into a slurry, which was then used as fertilizer or fed to prisoners and peasants as a high-protein fuel [1].

Clearly, lobsters were hardly symbolic of fine dining and affluence. Lobsters were so reviled that indentured servants in Massachusetts often signed contracts refusing to eat them more than three times a week, deeming such treatment as being cruel and unusual. In the mid-1800s, railways overtook America as the dominant mode of transportation and led the lobster on its journey to popularity. Train managers exploited the low cost of small lobsters and fed them whole to unsuspecting inland customers, touting them as a rare and exotic delicacy. Satisfied customers quickly spread word of this new luxury food, and thus began the rise of the lobster. With the help of this clever rebranding, lobster meat began appearing in restaurants alongside salad bar toppings and gained wide recognition not only as a viable source of protein, but also as a respected food item. By World War II, lobsters became integrated into American society as a luxury [2].

Whether they’re plucked straight from the sea or from a tank at the grocery store, there are few foods that beat a freshly cooked lobster. Many of us squirm at the prospect of plunging a live lobster into a bubbling vat of doom, viewing the act as a cruel, but necessary sacrifice we must make in order to eat it. So what is it that compels us to cook them live in the first place? A major turning point in its culinary standing was when chefs realized that lobsters taste better when cooked alive. Cooking live shellfish preserves the structural integrity of the meat and gives a sweeter and cleaner taste, in stark contrast to the putrid flavors that can develop in the mushy flesh of deceased lobsters [1]. The biochemistry of death accounts for this change. The inside of a dead lobster serves two purposes: it’s a hub for several enzymatic reactions, and it’s a breeding ground for rogue bacteria. Upon death, proteolytic enzymes are activated and attack the lobster’s internal organs. Once under attack, these organs release another wave of enzymes into the lobster’s muscle tissue. A major player here is the liver, which houses a multitude of proteases reserved for digesting food. These digestive proteases, along with the first wave of enzymes, leak out and begin degrading muscle tissue, by breaking collagen and other proteins down into smaller peptides, polypeptides, and amino acids. Given how rapidly these enzymes work, it’s only a matter of time before the lobster’s flesh turns to mush. Additionally, many nutrient-producing enzymes are also activated upon death. These newly-produced nutrients cause trouble by encouraging bacterial proliferation. As bacteria begin multiplying inside of the lobster, they produce metabolic waste products along with their own brand of proteases, many of which lend to the off-flavors and textural defects found in deceased lobsters.

To save the lobster meat from succumbing to textural degradation or bacterial contamination, iced storage or evisceration are often recommended to minimize enzymatic activity. Rapid heating via boiling or steaming, however, still remains the best-known way of rapidly deactivating these enzymes. Bacterial contamination in shellfish can also lead to food poisoning and other complications, so not only does freshly killed seafood taste better, but it’s also much safer to eat. Cooking live lobsters allows us to minimize the ill-effects between death and consumption and spares us from suffering any gastric mishaps [5]. You’ve tossed the lobsters into the pot now—what’s actually going on under that furiously clanking lid? Maybe you’ll hear them thrashing around or a hissing sound as steam escapes from their shells. One thing you’ll also notice as the lobster cooks is its color change—from a blue-black to a brilliant red-orange. A lobster’s muted coloring provides camouflage when it’s prowling around in the sea.

Uncooked, a lobster’s shell contains α-crustacyanin, a complex formed when a protein binds with pigmented carotenoids derived the crustacean’s plankton-heavy diet [3]. On their own, carotenoids are richly colored and can range from yellow to red, and they’re also credited with providing sweet potatoes, carrots, and tomatoes with their vibrant colors. When bound to proteins inside a lobster shell, they’re blue. As heat is applied, the α-crustacyanin protein complex denatures and releases free carotenoids. Astaxanthin, the main pigment molecule, is now exposed and provides cooked lobsters with their characteristic red hue [6].

Within the shell, a lobster’s meat acquires those sweet and nutty aromas we’ve come to associate with seafood and summer. There are more than just cultural influences that have made lobsters desirable; it’s the very chemistry of lobster meat that sets it apart from others. When was the last time you invited company over for dinner and decided to serve boiled steaks? You probably never have. There’s a reason you fired up your grill—and that’s because grilling produces a far more flavorful steak. Cooking at higher temperatures associated with roasting or grilling triggers the beloved browning/Maillard reaction known to impart complex flavors onto your food. A unique feature of lobster meat that it undergoes the Maillard reaction at much lower temperatures than other meats like beef, chicken, or pork. As it turns out, lobsters actually have an unusually high concentration of free amino acids and sugars in their muscle tissue. This abundance of free amino acids more readily undergo these flavor-producing reactions at much lower temperatures than would be re-quired in other types of meat. This is why you can get away with boiling lobsters and shell-fish and still manage to produce incredible flavors (3). Lobsters are a delight to the masses. They’ve amused countless children at the grocery store in their tanks and they’ve satisfied hungry adults alike. Whether you’re considering its history, culinary uses, or chemistry, the lobster truly is a sensation.

Mai Nguyen is an aspiring food scientist who received her B.S. in biochemistry from the University of Virginia. She hopes to soon escape the bench in pursuit of a more creative and fulfilling career. Read more by Mai Nguyen