Lev Kofman passed away this morning. He was a great physicist, animated by passion and joy. I was last in his office, at CITA, two years ago. As usual, the conversation stretched across wide swaths of physics, governed only by Lev's irrepressible enthusiasm and interest. He will be missed.

Lev Kofman: June 17, 1957 - November 12, 2009 We are deeply saddened to inform you that the fabulous Lev Kofman, husband of Anna, father of Sergei 13 and Maria 15, brother of Svetlana, and our great friend, died in the early morning of November 12 from cancer. Many of you were able to commune with Lev as the situation deteriorated over the past weeks, by visits, phone calls, and emails read to him. We are deeply grateful for that: and it provided some solace for Lev to know the tremendous impact he has had on the lives of so many of you. 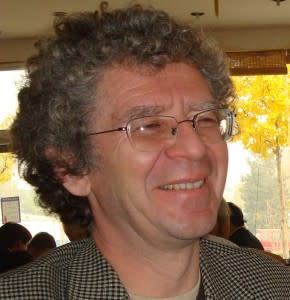 He bravely kept the physics going strong throughout his illness, characteristic of Lev. His scientific outpourings and influence will transcend this passage. As you know, he made fundamental contributions to Lambda cosmology and dark energy, structure in the cosmic web, inflationary theory, its Gaussian and non-Gaussian aspects, and gravitational waves. He initiated and developed the theory of preheating, showing how all matter could arise from a coherent vacuum energy at the end of inflation, his cosmic baby. And much more besides. He was the quintessential leader, for CITA and CIFAR as a whole, and for the vibrant early universe group he established, providing inspirational guidance to a generation of young researchers. He felt the physics to his very core. Beyond this, it is the indomitable, fun-loving, deeply philosophical spirit, a gourmand of life in all its manifestations, that we will miss so much. With our best wishes in these sad times, Anna Chandarina (Kofman) Svetlana Kofman Dick Bond Andrei Linde Renata Kallosh