Lesson Burned: Does Sunscreen Actually Reduce the Risk of Cancer? 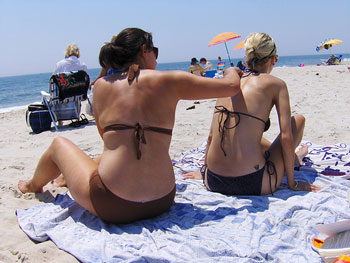 Emily Elert is a science journalist and writer. Her work has appeared in DISCOVER, Popular Science, Scientific American, and On Earth Magazine. Last month, CBS Boston aired a story

about a man in Massachusetts who caught fire while operating a grill in his backyard. He wasn’t going crazy with lighter fluid, nor was he being careless with propane. No, the culprit was Banana Boat Sport Performance

spray-on sunscreen. But don't be too quick to blame the orange bottle. After all, this kind of thing does occasionally happen when people spray flammable substances from aerosol cans in close proximity to burning coals. There are, however, other reasons to be suspicious of the summertime mainstay: several recent reports have raised questions about both the effectiveness and safety of sunscreens. In fact, the National Cancer Institute, a branch of the NIH, declares on its website that studies on sunscreen use and cancer rates in the general population have provided “inadequate evidence” that sunscreens help prevent skin cancer. What’s more, research suggests that some sunscreens might even promote it. Those are heavy charges for a product that people have long felt so good about using. Here’s what you need to know to understand how sunscreen is supposed to work. Sunlight contains two types of ultraviolet radiation, the energy-rich UVB variety, and the weaker, though still potent, UVA variety. Scientists have known that UVB radiation causes cancer since at least 1928. That’s when a British researcher named G.M. Findlay

exposed several dozen albino mice to a daily dose of rays and watched, over a period of months, as several of them sprouted tumors on their backs and ears. Later studies have shown that this is because intense UVB penetrates the nuclei of cells, where the rays strike DNA and break its chemical bonds, causing mutations. If the mutations are in a part of the DNA responsible for controlling cell reproduction, cancer can result. In the 1980s, researchers began finding evidence

that that even weaker UVA light can cause cancer. UVA rays aren’t powerful enough to break the chemical bonds in DNA like UVB rays do, but they can knock electrons off atoms inside cells, turning them into free radicals that, in turn, damage the cell’s genes. Sunscreen works by either reflecting or absorbing ultraviolet radiation. Of the 17 FDA-approved active ingredients in American sunscreens, nine block UVB rays, three block UVA, and five block some of each. Given that, you’d think that it would be reasonable to assume that sunscreen can help prevent skin cancer. But there are a few holes in this parasol. First of all, the way sunscreen’s effectiveness is measured—its SPF rating—basically only describes its ability to block UVB rays. That’s because UVB is the main cause of sunburn, and a sunscreen’s SPF stands for how long you can stay in the sun without getting a sunburn (a lotion that allows you to spend 40 minutes in the sun rather than the usual 20 before burning, for example, has an SPF of 2). UVA rays can cause cancer but not sunburn, so they don't factor into the SPF calculation. That means that if you slather on a high SPF sunscreen that only protects against UVB, you’d still absorb lots of UVA radiation, potentially increasing your long-term cancer risk. 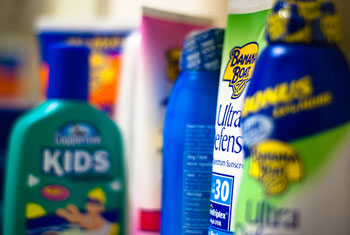 Soon it will be easier to tell which sunscreens include ingredients that block or absorb UVA as well as UVB. According to FDA regulations passed last year, products that pass a “Critical Wavelength” test---meaning that they block wavelengths across the ultraviolet spectrum---will carry the label “Broad Spectrum” alongside the SPF, while sunscreens that don’t pass the test will be forbidden from claiming they have such capabilities. However, those regulations don’t go into effect until December, so for this summer, you’re still stuck with SPF. And, by the way, you probably need to apply twice as much sunscreen as you think to actually get an SPF as strong as that marked on the bottle: manufacturers test their products’ SPF with the assumption that you will slather on obscene amounts

. This discrepancy could be contributing to the fact that the NIH, when looking the connection between sunscreen use and skin cancer in large populations, doesn’t see clear evidence that sunscreen is effective in reducing the risk of skin cancer. (It’s worth pointing out, too, that there is a clear genetic component in some skin cancers, so just avoiding sun or using sunscreen regularly are not the only factors that determine whether someone gets it.) So once you can buy sunscreen proven to block both kinds of radiation, you should be confident that your sunscreen reduces the risk of cancer, right? It’s not quite that simple. While the new rules should help consumers choose products with better protection from radiation, some research over the past decade has suggested that certain sunscreen ingredients pose potential cancer and hormone-related risks of their own. Most of the debate focuses on two common sunscreen ingredients: Retinyl palmitate and oxybenzone. Retinyl palmitate (RP) is a form of Vitamin A that is naturally stored in your skin. RP is also a very common dietary supplement—it’s even added to low-fat milk

—and is found in hundreds of cosmetics and personal care products, including sunscreen. The tricky thing about RP is that it has a sort of Jekyll/Hyde thing going on. Most of the time, it functions as an antioxidant, meaning that it neutralizes harmful free radicals. However, when exposed to UV rays like the ones striking your sunscreen-smeared skin, RP breaks down, becoming a free radical itself. Does that mean that RP in sunscreen is a cancer risk? For anyone looking for an answer to that question, there is good news and bad news. The good news is that there are scientists who are willing to give advice to confused consumers; the bad, or at least mixed, news is that those scientists fall into one of two opposing ideological camps, each with legitimate evidence on its side. The “safe until proven harmful” camp adopts an attitude similar to the U.S. justice system: We should assume FDA-approved chemicals are safe until the scientific community is convinced, beyond any reasonable doubt, that they aren’t. The other camp argues that, while a sunscreen ingredient is on trial, people should avoid those chemicals and use products whose ingredients still have a clean record. The two poles are represented, more or less, by two of the most vocal groups in sunscreen science: The Environmental Working Group, an advocacy organization focused on the health and safety of consumer products, and the Photobiology Committee of the Skin Cancer Foundation, a non-profit that receives funding

from over 70 corporations, mostly sunscreen manufacturers. Their disagreement on RP safety is a good example of how the two groups interpret the same information differently: The Committee argues that there are plenty of other antioxidants in the upper layers of the skin, so any free radicals created from an RP-containing sunscreen would be neutralized before they could damage DNA. The EWG, on the other hand, argues that even if studies haven’t shown conclusively that RP raises the risk of skin cancer, consumers might as well eliminate the potential risk by choosing alternative products with chemicals that are equally effective—titanium dioxide for protection against UVB, and zinc oxide and avobenzone for protection against UVA---and not potentially dangerous. (The EWG's position is an application of the precautionary principle

, a controversial, safety-first perspective that figures into many health and environmental debates

.) The other ingredient under scrutiny due to concerns about potentially negative impacts on the growth and function of the human reproductive system is oxybenzone (Benzophenone-3). It’s an estrogenic—often referred to as “hormone-disrupting”---chemical that is very common in sunscreens. Parties on both sides of the sunscreen aisle agree that people readily absorb oxybenzone through their skin, that it influences hormone levels, and that, as a result of its ubiquity in personal care products, can be found in the bodies of 97% of the U.S. population

. Studies have also found that high levels of oxybenzone can wreak havoc on the reproductive systems of rats. Similar studies in humans have not been done, for obvious legal and ethical reasons, and research on the health effects at normal doses has not been so conclusive. How do the two camps interpret that? The Skin Cancer Foundation’s Photobiology Committee points out that oxybenzone does not appear to accumulate in our organs: we excrete most of the stuff with in a matter of hours. The EWG makes the argument, again, that there’s enough troubling evidence and enough effective alternatives

, for consumers to avoid oxybenzone. Even if the FDA does come around to the skeptical perspective on these two ingredients, they're likely to remain in many brands of sunscreen for at least several years; the FDA routinely takes many years, or even decades, to adjust its opinions on the safety of already-approved chemicals in light of new evidence. In the meantime, consumers are faced with the decision whether or not to avoid ingredients whose health effects and safety remain controversial. Since the science on these chemicals isn’t definitive, you may just have to decide whose argument makes the most sense to you. If you want to go with the more conservative approach, the EWG recommends sticking to sunscreens containing either zinc oxide or titanium dioxide, which reflect light rather than absorbing it, and have the least potential for harm. For a much more comprehensive analysis of available sunscreens, you can check out EWG annual sunscreen guide

, where all available products are rated according to both their safety and efficacy. And whatever you do, if you use an aerosol form of sunscreen, keep it away from the grill—everyone agrees that the flame protection factor is nonexistent.