Lactose tolerance, is it "dominant"? 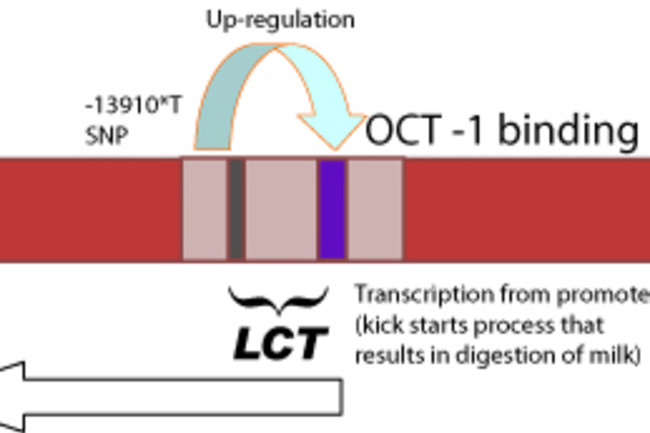 Over at agnostic's blog p-eter points out that lactose tolerance can be considered "dominant." Most of you know I have issues with terms like dominant or recessive because I think the simple heuristic is infectious and tends to persist and spread throughout the discourse to the point where it obstructs rather than illuminates. That being said, I can see where he's coming from. We know a bit about the primary European mutation which confers the ability to digest milk as an adult. It's a cis-acting element which works to maintain transcription from the LCT gene, and so results in a level of enzymatic product sufficient to break down milk sugars. In "wild type" humans one assumes that LCT ceased to function as one matured. Yet this mutation keeps LCT active and allows adults to digest lactose. As humans are diploid, we carry two copies of each gene, just one allele or copy of LCT which continues to transcribe gene product would be sufficient to render one "lactose tolerant." One copy is sufficient and necessary, and so one can assert that on the phenotypic level the European mutant is dominant over the ancestral variant. On an evolutionary level the fact that the allele confers a dominant phenotype that increases fitness is important because it is immediately available for selection to operate upon it. A recessive mutant must be present on both copies to bring to the fore its selective advantage, and so it takes some time to increase in frequency as most of the copies are "masked" at low frequencies in heterozygotes. In contrast, dominant mutants start out as heterozygotes at low frequency, but these copies are all exposed to selection. On the biochemical level though a gain of function mutation which acts in cis, that is, a genomic element which operates across the same physical segment of the genome (see illustration) may express additively. Two copies of LCT for gain of function might produce double the enzymatic product of one copy. In some cases an enzymatic pathway is characterized by limiting steps where the extra copy is superfluous, the enzyme has reached saturation threshold and the excess has no phenotypic effect because another step in the pathway is limiting the reaction. In this case the dominance is mechanistically salient on the biophysical quantitative scale even though the immediate gene product might differ between heterozygotes and homozygotes. The biochemical process can only proceed at a maximal rate which is restricted by other factors, and that maximal rate is already attained with one copy. On the other hand, if you read the paper below you'll see that assays for efficiency in the processing of lactose are rather crude. It maybe that like taste there is cryptic phenotypic variation which we are currently missing because of the crude nature of the data. Perhaps there are "super-metabolizers," who are all homozygotes, vs. "metabolizers" and the "non-metabolizers" (who lack any gain of function copy). Finally, there is the angle of fitness. Most of the time when traits result in a dominant vs. non-dominant phenotype there is a small fitness difference between heterozygotes and dominant homozygotes. That is, the dominance is imperfect. Heterozygotes may not quite be between the two homozygotes, but they may not express the dominant phenotype or be as fit. And yet in the case of lactose tolerance even if homozygosity for the gain of function allele results in realized heightened efficiency in lactose metabolization one can not draw a linear relationship between the rate of metabolization and fitness, as fitness may exhibit a threshold trend. And I'm not even going to start on the impact of gene-gene interactions and loci which act via trans-acting factors.