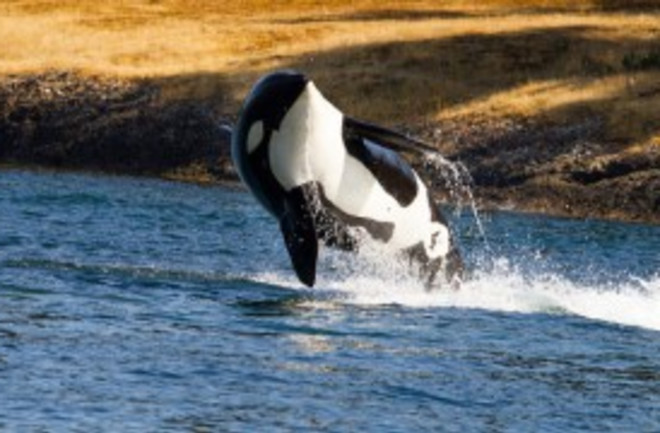 Even if you haven't watched Star Trek IV, you are probably aware of the fact that cetaceans (whales and dolphins) are among the smartest animals on the planet. In fact, this study suggests that, given a chance, different species of cetaceans may be able to learn to communicate with each other. Scientists noticed that killer whales who had spent time with bottlenose dolphins incorporated more clicking and whistles in their vocalizations than other whales, making their "language" a mashup of the two. In fact, one whale was able to learn the sounds taught to a dolphin trained by people! Although we don't know what these different languages mean, or how much information is being transmitted between the species, it's clear that these animals are motivated to learn to make each other's sounds. And who knows, they may be teaming up to contact aliens after all!

Differences in acoustic features of vocalizations produced by killer whales cross-socialized with bottlenose dolphins. "Limited previous evidence suggests that killer whales (Orcinus orca) are capable of vocal production learning. However, vocal contextual learning has not been studied, nor the factors promoting learning. Vocalizations were collected from three killer whales with a history of exposure to bottlenose dolphins (Tursiops truncatus) and compared with data from seven killer whales held with conspecifics and nine bottlenose dolphins. The three whales' repertoires were distinguishable by a higher proportion of click trains and whistles. Time-domain features of click trains were intermediate between those of whales held with conspecifics and dolphins. These differences provided evidence for contextual learning. One killer whale spontaneously learned to produce artificial chirps taught to dolphins; acoustic features fell within the range of inter-individual differences among the dolphins. This whale also produced whistles similar to a stereotyped whistle produced by one dolphin. Thus, results provide further support for vocal production learning and show that killer whales are capable of contextual learning. That killer whales produce similar repertoires when associated with another species suggests substantial vocal plasticity and motivation for vocal conformity with social associates." Related content: