At least about some things. In Guns, Germs, and Steel he argued that latitudinal diffusion of agricultural toolkits was much easier than longitudinal diffusion. This seems right, but, one thing which Diamond did not emphasize enough in hindsight I suspect is that demographic diffusion and replacement can follow a similar pattern. I am probably not a "Neolithic population replacement" maximalist to the extent of someone like "Diogenes" or Peter Bellwood, but that is probably mostly a matter of my modest confidence about all of these sorts of issues. But, after running many trials of ADMIXTURE, along with perusing the results generated by Dienekes, David, and Zack, I am more confident in the position that agriculture and agriculture-bearing populations tend to initially follow paths of least ecological resistance. In kilometers the distance between Lisbon and Damascus is 4,000 units, while between Helsinki and Damascus it is 3,000 units, but Lisbon has been much more affected by the migrations from the Middle East than Helsinki. The facilitation of water transportation as well as ecological similarities between Lisbon and Damascus, at least in relation to Helsinki, explains this phenomenon. To illustrate this issue more broadly, let's look at some ADMIXTURE results. Zack Ajmal at the Harappa Ancestry Project has one of the most cosmopolitan reference sets around, and he's been posting results from his "reference 3" population, which merges a host of different study groups. Today he posted K = 6. That is, he generated 6 ancestral populations and allowed the program to assign proportions of each to individuals within the reference set. He labeled his putative ancestral populations: - S Asian - E Asian - European - SW Asian - African - American Zack generated his usual nice bar plots, but I thought there might be another way to look at the relationships between the proportions. A scatter plot where each axis represents a proportion of a putative ancestral group. Below you see "SW Asian" on the y-axis and "European" on the x-axis: 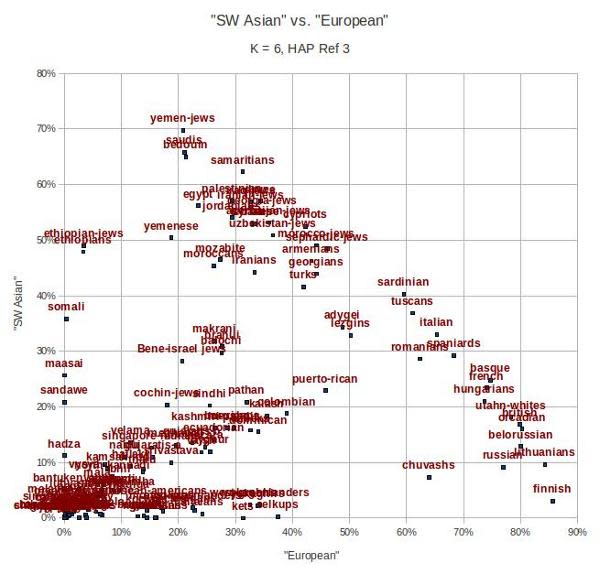 First, I have to remind you that

One good thing about doing your own runs is that you get a feel for the weirdness which bubbles out of the software. Populations which are evenly divided between two ancestral groups in an intuitive way can collapse in a higher K back into one element! Clearly hybridized populations can also transform into their own distinctive cluster. I tend to look at these sorts of results as suggestive pointers to relative relationships across populations. So, for example, there is the weird pattern that Western Europeans tend to have more "SW Asian" than Europeans from the Baltic, even though the latter region is closer as the crow flies to the Mid-East than the British Isles. What gives? Water and climate. Much of the west of Europe is mild, while the Baltic is climatically harsh. Temperate climate societies, with technology and norms to suit moderate regimes, could be transplanted relatively easily to a valley in Ireland with sea access, as opposed to the interior of Russia's center. In Zack's run the Finns are the most "European" of Europeans, and have the least "SW Asian." Intuitively this makes sense. The peoples of the Arabian peninsula are at the other pole. When you see deviations from the trend, that is due to the influence of other ancestral components. In the case of the Chuvash Turks, it is East Asian influence. For Iranians, it is South Asian. And for non-Jewish Yemenis, African. East Africa and Northeast Eurasia show parallel patterns. Both regions exhibit some level of "Caucasoid" admixture in direct proportion to distance, but, the influence is only from one stream. In East Africa it was an Arabian-affiliated element. In Northeast Eurasia it seems to have been mostly Northern European. That's why they hug the margins of the plot. In contrast, groups like Mestizos and South Asians have ancestral contributions from both these putative groups. Next let's look at "European" against "S Asian": 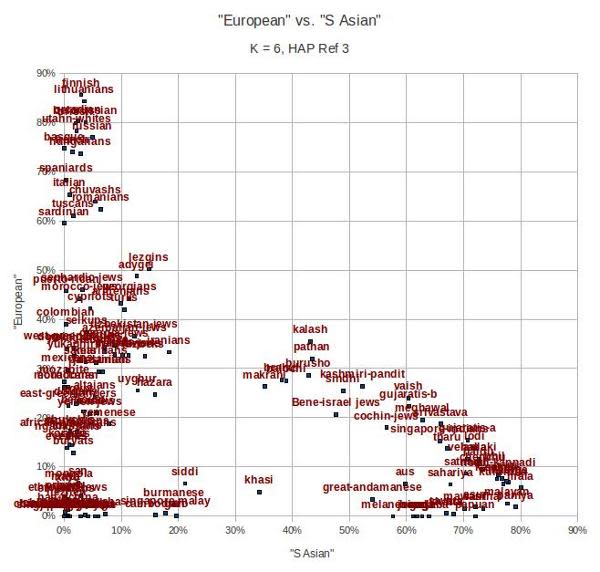 Nothing too surprising here. The main thing to note is that some groups in the Caucasus have a weird and unexpected affinity with South Asians. This has been extensively discussed by other genome bloggers, so I'll leave that to the side. Now "SW Asian" vs. "S Asian." 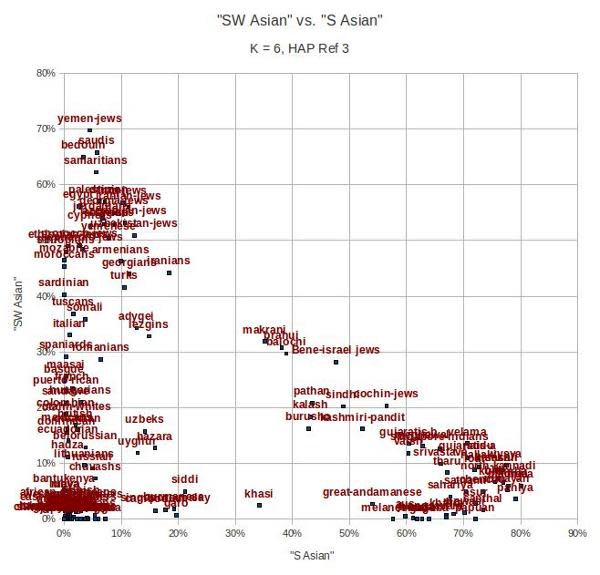 Middle Eastern populations just get swapped out for Europeans now. The Caucasian groups interestingly are at same position. But, there are some minor details which are notable. To spotlight that, I filtered the results to South Asian groups which had at least 10% combined "SW Asian" and "European" ancestry, and compared these two components: 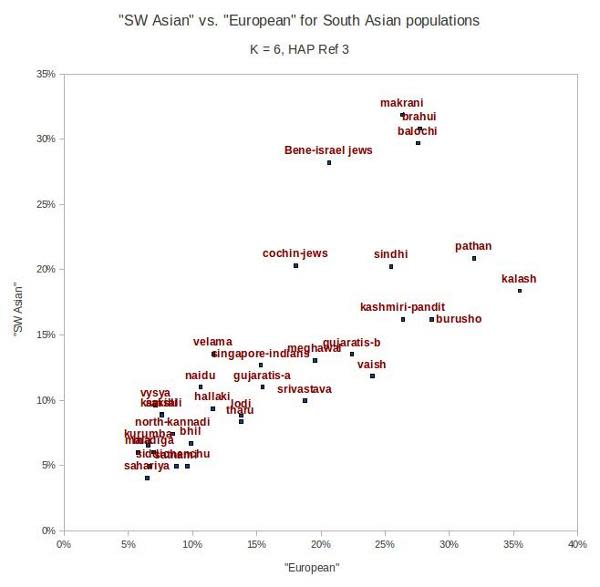 Ah, the two Jewish groups are outliers! Just as we'd expect. They're enriched for "SW Asian." The Baloch, Brahui, and Makrani, are three groups which are very closely associated at the junction of Iran, Pakistan, and Afghanistan. Historically the Baloch have had a presence in Oman because of their proximity, so it is likely that there has long been a maritime association with Southwest Asia on the part of this group. I suspect that the Baloch and Pathan have been diverging over time due to their different geographical position. Finally, in combination with the ancient DNA I think these ADMIXTURE results

strongly point to multiple demographic impacts of outsiders in Europe and South Asia.

I probably lean moderately to the proposition that the Basques are the descendants of Europe's first farmers. But those first farmers were not the last newcomers. At higher K's there's a clear difference between French Basques and French and Spaniards. There is the presence of a component which is modal in western Asia among the non-Basque populations of western Europe. In Dienekes' runs this element is present in Scandinavians, but not Finns. It is not dominant, but neither is it trivial. Similarly, if Reich et al. are correct the "S Asian" component is compound of two other ancient ones. But it does seem that after the initial fusion between West Eurasian-like "Ancestral North Indians" and the indigenous "Ancestral South Asians" there were subsequent groups. The Austro-Asiatic populations have clear affinities to East Asian groups, but they are still predominantly "S Asian," and, lacking in the "European" or "SW Asian" components. That suggests to me that these last two were later intrusions, subsequent to the amalgamation of the Austro-Asiatic Mundari populations with the indigenous substrate.