Japanese are brown-eyed a bit differently

Genotyping of five single nucleotide polymorphisms in the OCA2 and HERC2 genes associated with blue-brown eye color in the Japanese population:

Human eye color is a polymorphic phenotype influenced by multiple genes. It has recently been reported that three single nucleotide polymorphisms (SNPs) within intron 1 of the OCA2 gene (rs7495174, rs4778241, rs4778138) and two SNPs in intron 86 (rs12913832) and the 3 UTR region (rs1129038) of the HERC2 gene - located in the upstream of the OCA2 locus - have a high statistical association with human eye color. The present study is the first to examine in detail the genotype and haplotype frequencies for these five SNPs in an Asian (Japanese) population (n = 523) comprising solely brown-eyed individuals. Comparison of the genotype and haplotype distributions in Japanese with those in African and European subjects revealed significant differences between Japanese and other populations. Analysis of haplotypes consisting of four SNPs at the HERC2-OCA2 locus (rs12913832/rs7495174/rs4778241/rs4778138) showed that the most frequent haplotype in the Japanese population is A-GAG (0.568), while the frequency of this haplotype is rather low in the European population, even in the brown-eyed group (0.167). The haplotype distribution in the Japanese population was significantly different from that in the brown-eyed European group (FST = 0.18915).

OCA2 & HERC2 are the loci where variation seem to be able to account for 3/4 of the variation between those with blue and brown eyes in Europe. This is obviously important for forensic anthropology. But how well do the phenotypes map back onto genotypes? It depends. With skin color various light-skinned populations have different genetic architectures. There are many ways to do the same thing, in particular if it is simply loss of function. Similarly, as per neutral theory many mutations will not have any functional effect, and rather are simply a record of population history via random genetic drift. The sequence of SNPs, genetic variants, which make out these particular haplotypes illustrate this, as brown-eyed Europeans and brown-eyed Japanese have different genetic architectures. Since the region around OCA2 & HERC2 seems to have a generalized effect on pigmentation it may not be that the differences are even neutral. Below the fold are worldwide frequencies of the different SNPs above (from HGDP selection browser): 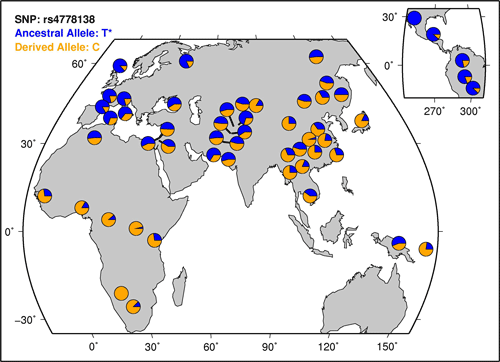 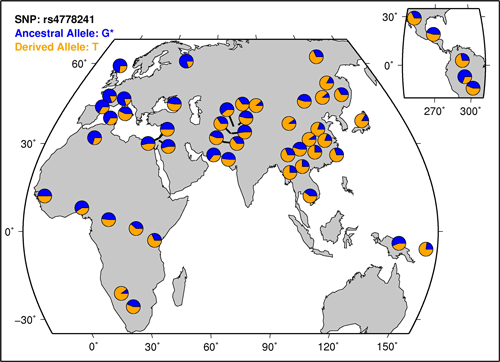 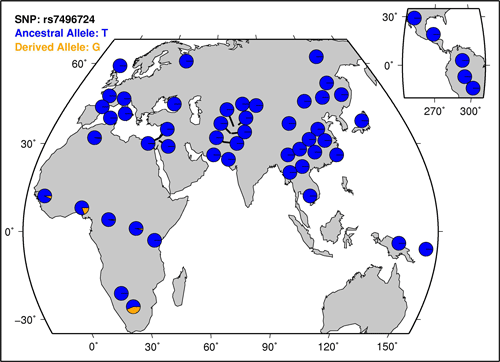 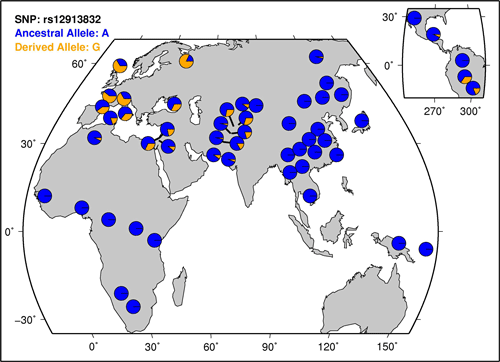