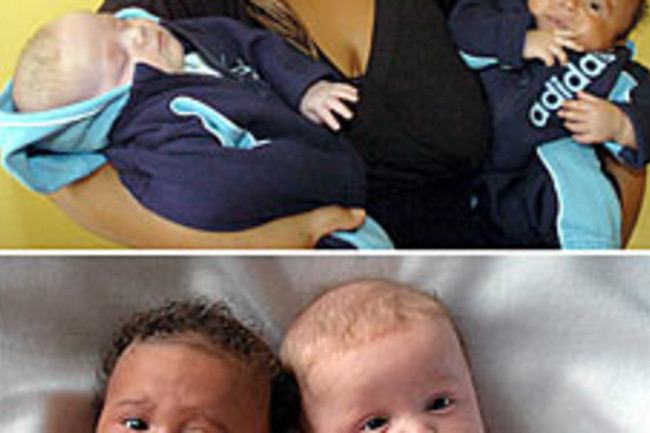 I noticed today that I was receiving a lot of search engine queries for black and white twins. Well, I have posted on it severaltimes, but I thought it was a bit much, so I checked the news, and lo & behold, another case just popped up. Like the Australian twins the mother here was biracial (Nigerian and English) while the father was white (in contrast to the earlier British case where the parents were both biracial). I'm sure you're getting tired of this, but I have to comment when I see headlines this:

. I've posted on it, and the odds in this particular case are not "a million to one," and since you've had three recent cases in the public eye within the past 6 months you would figure that we would re-evalute our priors here in regards to the expectation of probability. But in any case, I did think it was worth posting on this specifically because this pair of "black" and white twins were male and not female.^1What if they mated??? Let's focus on skin color here, since that is what people are focusing on: Dark + Light = ? Dark + Dark = ? Light + Light = ? What is going on here? OK, let's go back to the drawing board here: the brown-skinned twins are brown-skinned because they received functional melanin producing alleles from their mothers, in additional to the non-functional alleles from their white fathers, the white-skinned twins are white-skinned because they received non-functional alleles from their mothers, who are biracial and so carry both European and African derived copies. These genes tend to be additive and independent (i.e., not much dominance and interactivity). The alleles are probably adding up and subtracting a particular quanta of effect. Because the two brown-skinned twins are likely heterozygous in their genotypes, like the earlier case their own offspring will likely exhibit the full range of phenotype, with an expectation similar to their own value. Since the white-skinned twins only have non-functional melanin production alleles (or, the preponderance, seeing as how most whites can tan), their own offspring will tend to be white-skinned as well. Now, remember though that the "white" grandchildren and "black" grandchildren will be genetically half European and half African no matter what they look like! Consider the case of the Duffy antigen, nearly all whites are positive and most blacks are negative. The "white" descendents are just as likely to carry the negative ("African") allele as the positive one as the "black" descendents. What is clear is that phenotypic races can easily be maintained with assortative mating. That is, a multiracial population will exhibit variance, but if people operate with the rule mate-with-like than the discrete nature of genetics will result in the repooling of particular genetic configurations to greater then expectation than if it was a random mating context. 1 - I put "black" in quotations because the child is sociologically black, but genetically multiracial, and I would assert that their phenotype, like that of their mother, would fall in between the modal values of the parental populations. In contrast the white twin, who like his "black" brother is 3/4 European in ancestry, seems to look pretty much European, which stands to reason seeing as he is mostly European genetically.