Is Your Halloween Costume Safe? 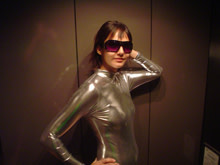 This year, Disco thought we’d get into the spirit of Halloween and dress up in a space suit. So we went to a costume store and bought a silver unitard for the occasion. But when we took the suit out of the bag, it smelled like a new shower curtain. Earlier this year, a national environmental organization found that shower curtains contained high concentrations of phthalates and released volatile organic compounds it to the air (which are all chemicals that the Environmental Protection Agency has recognized as hazardous). Which would explain why the smell made us feel nauseous. We checked the tag to see what the unitard was made out of: 100 percent polyester, made in China. So is this costume safe to wear today? Not really. Polyester burns at high temperatures, and when lit on fire, it can instantly melt the skin. Apparently most of the cheap polyester costumes sold come from China, where they use flammable items instead of the more expensive flame-retardant materials. If the costume doesn’t say “flame-retardant” on the package, then it’s not. Related Content: DISCOBLOG: Top Ten Halloween Costumes (Part I) and (Part II) Credit: Adam Hadhazy