Is your "funniest" joke falling flat? This study may help your delivery! 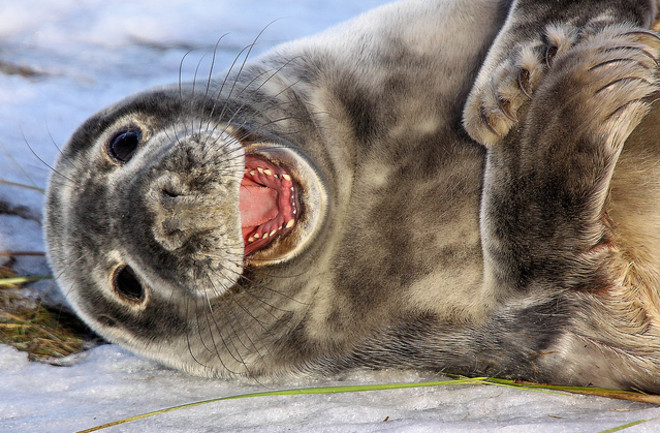 Image:Flickr/AirwolfhoundAdmit it, you've been there: the swell of pride as you deliver the punchline of your best joke EVER, and it's followed by... nothing. The gaping silence rings louder than any peal of laughter. So, what went wrong? You know the joke is good, yet no one laughed. Well, these scientists have your back! They tested different methods of "priming" one's audience by exposing them to elements of the joke, and/or the actual punchline, and guess what... it works! Apparently, dropping words from the punchline 1-15 minutes before telling the joke led to funnier ratings. And if you're at a loss for a joke to get started with, you might try the one they quoted in the paper:

"Consider, for instance, the “World's funniest joke” as empirically found by Wiseman (2002): Two hunters are out in the woods when one of them collapses. He doesn't seem to be breathing and his eyes are glazed. The other guy whips out his phone and calls the emergency services. He gasps, “My friend is dead! What can I do?” The operator says “Calm down. I can help. First, let's make sure he's dead”. There is a silence, then a gun shot is heard. Back on the phone, the guy says “OK, now what?”

And if you don't get it, they can help with that too:

"Initially, the second shot comes as a surprise and the reader does not comprehend why the surviving hunter is obviously firing again at the wounded one. But then, it becomes clear that the phrase “make sure he's dead” has two meanings, and the surviving hunter apparently misunderstood the operator's suggestion. This insight allows a re-establishment of the joke's narrative consistency, resulting in a feeling of funniness."

Yeah, we were pretty surprised that joke won, too! I guess that means that there's hope for all of us!A processing fluency-account of funniness: running gags and spoiling punchlines. "Earlier theories on humour assume that funniness stems from the incongruity resolution of the surprising punchline and thus an insight into the joke's meaning. Applying recent psychological theorising that insight itself draws on processing fluency being the ease and speed with which mental content is processed, it is predicted that increasing the fluency of processing the punchline of a joke increases funniness. In Experiments 1 and 2, significant nouns from the punchlines or from the beginnings of jokes were presented before a joke was rated in funniness. Pre-exposing punchline words 15 minutes and even only 1 minute before the eventual joke led to increased funniness ratings. In contrast, pre-exposing punchline words directly before a joke led to decreased funniness ratings. Furthermore, pre-exposing the beginning of a joke 1 minute before the joke had no effects on funniness. Experiment 3 ruled out exposure-facilitated punchline anticipation as alternative mechanism, and Experiment 4 replicated this fluency effect with typing font as manipulation. These findings also show that pre-exposing a punchline, which in common knowledge should spoil a joke, can actually increase funniness under certain conditions." Related content: NCBI ROFL: The effects of caffeine, dextroamphetamine, and modafinil on humor appreciation during sleep deprivation. NCBI ROFL: Humor and death: a qualitative study of The New Yorker cartoons (1986-2006). NCBI ROFL: Aggression-inhibiting influence of sexual humor.