Is Muskrat Poop the Next Penicillin? 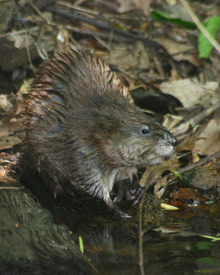 Considering the rate at which we’re going through traditional antibiotics, one day doctors may have to turn to muskrat poop to treat infections.That’s right, the feces of muskrats, a common squirrel-sized swamp-dwelling rodent, contains a chemical that kills Salmonella, Staphylococcus aureus

(that causes staph infections), and other bacteria, according to South Korean researchers.The research team has filed a patent for a method of preparing the antibiotic, which involves using organic solvents to extract the chemical from dried muskrat excrement.

But, as they say in infomercials, that’s not all!The researchers claim that the same chemical also kills plant pathogens and termites.They envision a whole line of muskrat poop products, including antibiotics, fertilizers, and pesticides.Muskrat poop would be a fitting addition to next-generation antibiotics that already include alligator blood and frog skin.

In the patent, the researchers do not reveal the identity of the chemical, nor whether it would be toxic to humans.However, we do know that muskrat meat is safe to eat.Just ask the Archdiocese of Detroit, which has a special dispensation that allows Catholics to eat muskrat meat on Fridays, since the mammal lives mostly in water, like fish.One diner says muskrat tastes like duck.