Is Girls' Generation the outcome of the Pleistocene mind? 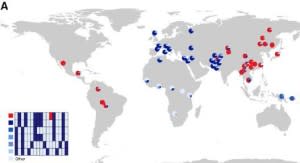 There's an excellent paper up at Cell right now, Modeling Recent Human Evolution in Mice by Expression of a Selected EDAR Variant. It synthesizes genomics, computational modeling, as well as the effective execution of mouse models to explore non-pathological phenotypic variation in humans. It was likely due the last element that this paper, which pushes the boundary on human evolutionary genomics, found its way to Cell (and the "impact factor" of course). The focus here is on EDAR, a locus you may have heard of before. By fiddling with the EDAR locus researchers had earlier created "Asian mice." More specifically, mice which exhibit a set of phenotypes which are known to distinguish East Asians from other populations, specifically around hair form and skin gland development. More generally EDAR is implicated in development of ectodermal tissues. That's a very broad purview, so it isn't surprising that modifying this locus results in a host of phenotypic changes. The figure above illustrates the modern distribution of the mutation which is found in East Asians in HGDP populations. 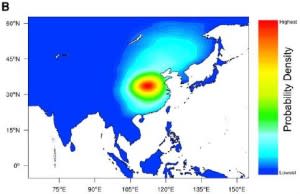 A high density of eccrine glands is a key hominin adaptation that enables efficient evapo-traspiration during vigorous activities such as long-distance walking and running (Carrier et al., 1984; Bramble and Lieberman, 2004). An increased density of eccrine glands in 370A carriers might have been advantageous for East Asian hunter-gatherers during warm and humid seasons, which hinder evapo-transpiration. Geological records indicate that China was relatively warm and humid between 40,000 and 32,000 years ago, but between32,000 and 15,000 years ago the climate became cooler and drier before warming again at the onset of the Holocene (Wang et al., 2001; Yuan et al., 2004). Throughout this time period, however, China may have remained relatively humid due to varying contribution from summer and winter monsoons. High humidity, especially in the summers, may have provided a seasonally selective advantage for individuals better able to functionally activate more eccrine glands and thus sweat more effectively (Kuno, 1956). To explore this hypothesis, greater precision on when and where the allele was under selection—perhaps using ancient DNA sources—in conjunction with more detailed archaeological and climatic data are needed.

A climate adaptation is always a good bet. The problem I have with this hypothesis is that modern day gradients in the distribution of this allele are exactly the reverse of what one might expect in terms of adaptation to heat and humidity. Additionally, is there no cost to this adaptation? After the initial sweep upward, the populations where the derived EDAR mutant is found in high frequencies went through the incredible cold of the Last Glacial Maximum, and groups like the Yakuts are known to have cold adaptations today. Not only that, but the Amerindians from the arctic to the tropics all exhibit a cold adapted body morphology, the historical consequence of the long sojourn in Berengia. Granted, the authors are not so simplistic, and the somewhat disjointed discussion alludes to the fact that EDAR has numerous phenotypic effects, and it may be subject to diverse positive selection pressures. This seems plausible on the surface, but this complexity of mechanism seems ill-fitted to the fact that the signal of selection around this locus is so clean and crisp. It seems that this is not going to be an easy story to unpack, and there's a good deal of implicit acknowledgement of that fact in this paper. But tacked right at the end of the main text is this whopper:

It is worth noting that largely invisible structural changes resulting from the 370A allele that might confer functional advantage, such as increased eccrine gland number, are directly linked to visually obvious traits such as hair phenotypes and breast size. This creates conditions in which biases in mate preference could rapidly evolve and reinforce more direct competitive advantages. Consequently, the cumulative selective force acting over time on diverse traits caused by a single pleiotropic mutation could have driven the rise and spread of 370A.

A simple takeaway is that the initial climatic adaptation may have given way to a cultural/sexual selective adaptation, whereby there was a preference for "good hair" as exemplified by pre-Western East Asian canons (black and lustrous), as well as a bias toward small breasts. This aspect gets picked up in The New York Times piece of course. I'll quote again:

But Joshua Akey, a geneticist at the University of Washington in Seattle, said he thought the more likely cause of the gene’s spread among East Asians was sexual selection. Thick hair and small breasts are visible sexual signals which, if preferred by men, could quickly become more common as the carriers had more children. The genes underlying conspicuous traits, like blue eyes and blond hair in Europeans, have very strong signals of selection, Dr. Akey said, and the sexually visible effects of EDAR are likely to have been stronger drivers of natural selection than sweat glands.

The passage here is ambiguous because the author of the article, Nick Wade, doesn't use quotes, and I don't know what is Akey and what is Wade's gloss on Akey. For example, for theoretical reasons of reproductive skew (a few men can have many children) in general sexual selection is considered to be driven most often by female preference for male phenotypes. I assume Akey knows this, so I suspect that that section is Wade's gloss (albeit, a reasonable one given the proposition of preference for smaller breasts). The main question on my mind is how seriously prominent population geneticists such as Joshua Akey actually take sexual selection to be as a force driving variation and selection in human populations. It seems that quite often sexual selection is presented as a deus ex machina. A phenomenon which can rescue our confusion as to the origins of a particular suite of traits. But our assessment of the likelihood of sexual selection presumably has to be premised on prior expectations informed by a balance of different forces one can gauge from the literature, and here my knowledge of the current sexual selection literature is weak. Perhaps my skepticism is premised on my ignorance, and the population geneticists who proffer up this explanation are more informed as to the state of the literature. All this brings me back to the farcical title. When this paper first made news last week I was having dinner with a friend of Japanese heritage (who spent his elementary school years in Japan). I asked him point blank, "Do you like small breasts?" His initial response was "WTF!?! Razib," but as a mouse geneticist he understood the thrust of my question after I outlined the above results to him. From personal communication with many East Asian American males I am not convinced that there is a overwhelmingly strong preference for small breasts within this subset of the population. But the key here is American. These are individuals immersed in American culture. The norms no doubt differ in East Asia. The typical visual representation of celebrity East Asian females that we see in the American media depict individuals who are slimmer and more understated in their secondary sexual characteristics than is the norm among Western female celebrities (e.g., Gong Li, the new crop of Korean pop stars, even taking into account the plastc surgery of the latter). Part of this is no doubt the reality that the normal range of variation across the population differs, and part of it may be the nature of aesthetic preferences. But the possibility of deep rooted psychological reasons driving sexual selection (to my knowledge there was no culture which spanned South China and Siberia) brings us back to old ideas about the Pleistocene mind. And, it brings us back to evolutionary psychology, a field which is the whipping boy of both skeptics of the utility of evolutionary science in understanding human nature, and rigorous practitioners of evolutionary biology. And yet here it is not the evolutionary psychologists, but rock-ribbed statistical geneticists who I often see being quoted in the media invoking sexual selection. But do we know it is sexual selection, or is it just our best guess? Because more often than not best guesses are wrong (though best guesses are much more likely to be right than worst guesses!). Evolutionary genomics has come a long way in the past 10 years. We know, for example, the genetic architecture and some aspects of the natural history of many traits. But, there are still shortcomings. Lactase persistence is the exception to the rule. Even a phenotype as straightforward as human pigmentation has no undisputed answer as to why it has been the repeated target of selection across Eurasia over the past 40,000 years. Oftentimes the right answer is simply that we just don't know.Citation: http://dx.doi.org/10.1016/j.cell.2013.01.016