If you've ever found yourself wondering whether a thermometer reading means you're sick, you're not alone. 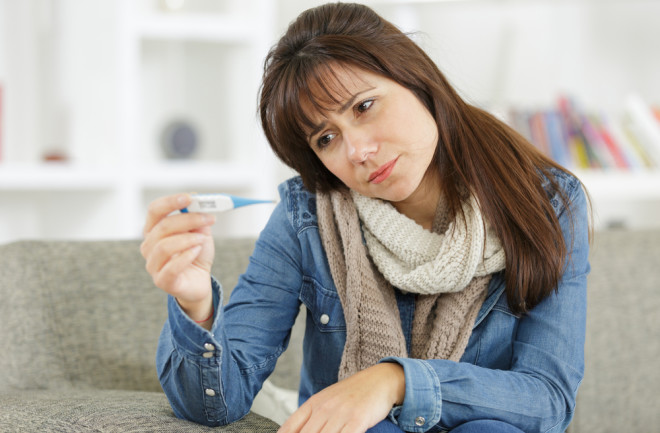 Are you running a fever or not? It sounds like a straightforward question, but the answer is anything but.

From a clinical standpoint, most physicians recognize body temperatures higher than 100.4 degrees Fahrenheit as a true fever. But what happens if you check your temperature and find that your thermometer reading isn’t quite as pronounced?

According to Ellen Foxman, a physician and immunologist at Yale Medical School, it can be difficult to make sense of the gray area that exists between a normal body temperature and the "textbook definition" of burning up. A mild fever by itself could mean that you’re getting sick, but there are also other explanations that are usually no cause for concern.

Foxman says that fevers are a system-wide reaction to inflammation in the body. Sunburns, for instance, are an inflammatory response to skin damage, which might also cause someone to have a fever. Extreme cases of physical overexertion could theoretically cause body temperature to increase. Emotional stress, digesting a meal and ovulation in women also have also been known to temporarily knock body temperature a little out of whack.

Making matters more complicated, what’s considered a normal body temperature to begin with varies from person to person. Some people naturally run a little lower or higher than the 98.6 F benchmark we’re all familiar with. Studies have also found that the average body temperature is lower today than 150 years ago, and is now at 97.5 F. Generally, men tend to have lower temperatures than women. And as we age, our average body temperature may decrease. But even with these individual variations, a true fever is still 100.4 F and above.

Most people's temperature also can fluctuate slightly based on the time of day — typically it's lower in the morning, higher in the afternoon and lower again around bedtime.

The device used to take temperature, and where it’s applied on the body, also matter. Studies have found that rectal thermometers are the most accurate measurement of the body's temperature. But before you rush out and buy one of your very own, know there are reasonably accurate alternatives. Oral thermometers and ear thermometers provide more accurate temperature readings as compared to armpit or temple thermometers.

How to Know If You're Sick

In general, people should rely less on the number they see on a thermometer and more on how they feel in general, Foxman says. Chances are that if you’re taking your temperature in the first place, you’re probably feeling a little “off” or downright crummy. And those are the cues you should be listening to. “People know what it feels like to get sick, that’s your sign that maybe you’re getting a respiratory virus. We’ve all experienced that before,” says Foxman. “[If] all you have is a subtly borderline number on the thermometer, that doesn’t really mean anything on its own.” In the midst of a pandemic, it's especially important for people to be in tune with how they’re feeling and to get a coronavirus test if an illness is suspected. Likewise, Foxman also says people should be aware of some of the stranger coronavirus symptoms, such as loss of smell or taste.

However, plenty of people get infected and never show symptoms or develop a fever. The CDC has estimated that 40 percent of people infected with COVID-19 are asymptomatic. That’s why everyone must take precautions that can protect others, like wearing a mask and socially distancing.

“It’s interesting to me that fever is being used as a screen [at workplaces and schools]," says Foxman. "In the SARS-CoV virus that occurred in 2003, almost everyone who got that had a fever four days before they had any symptoms. So it was a really good screening test, and that's not the case with this coronavirus. Many people don’t even have symptoms. So it's not quite as good of a test.”