I heard from a long-time correspondent this morning concerning introgression of microcephalin from archaic humans. I'm not sharing the whole message, but I thought it would be worth paraphrasing a key point for some thought. The basic point is this: Why are we talking about "introgression"? Why isn't this just gene flow?

He answers lucidly, but I would like to offer something that I think is important, and is behind why I do not use the term "gene flow," and prefer "introgression" even though it is more jargonistic. Gene flow is a generic term, and can correctly characterize a whole host of dynamics, while introgression is very specific and precise, a subset of gene flow rather than a synonym. Here is one definition of introgression:

Backcrossing of hybrids of two plant populations to introduce new genes into a wild population. 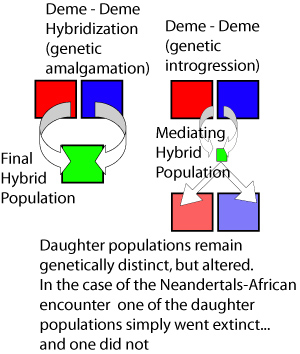 As you can see there is a fixation on plant populations because of the presumed context of introgression:

the movement of alleles across species boundaries

. I don't want to get into the Species Concepts debate, suffice it to say that I have a rather instrumental view of "species," and I don't think that the term or the taxonomic level is qualitatively that special from a genetic architectural vantage point (experts might want to chime in). The important point for me regarding introgression is that I believe it

aids in decoupling the history of demes from genes

. When we speak of the phylogeny of MCPH1 we can not simply use it as a proxy for the history of our own species. When we state that MCPH1 is extant within the human population at a frequency of 0.70 and that its origin is likely archaic/Neandertal, that does not imply that 0.70 of our human ancestry is archaic/Neandertal. Introgression implies that genes must be views as somewhat independent of the demes and populations and species in which they reside. Just as balancing selection can be confusing for those who confuse the history of demes and genes, so introgression can also be perplexing if one does not keep in mind that the "gene's eye view" is not always the "population's eye view." In the final analysis one may agree ontologically that every science is reducible to physics, but the reality is that the dynamics of genetics, demography, sociology, and so forth, need to be viewed in their proper frame so as to extract the maximum clarity out of the explanatory models. Just as conversion to Greek Orthodox Christianity does not imply that one is becoming genetically and ancestrally a Greek, so "picking up" Neandertal alleles does not mean that one is becoming a Neandertal. A Neandertal gene may be absorbed even if the demes do not assimilate each other to a great degree, and inversely, a deme may be absorbed even if their genetic heritage is predominantly lost in the shuffle of time and genetic drift (as may like happened to the Y and mtDNA lineages that Neandertals might have contributed to the ur-human population). Addenum: Note, if you have two populations at ratios of 4:1 for population A vs. B, and A is fixed for allele x on locus 1, and B for allele y on locus 1, then there is a 80% chance that allele y will go extinct, and the expectation is that this will occur within 4Ne generations. Nevertheless, population B's genomic contribution will remain extant in other regions of the genome, you can't use one locus to ascertain ancestry. Unfortunately, that is what the past few decades of neutral marker coalescent studies have been doing (mtDNA, Y). In contrast, if allele y had a 10% fitness advantage over allele x, then even though at t = 0 allele z would only be present at a proportion of 0.20, it is almost inevitable that y will replace x in the descent population. Nevertheless, one expects that on average population A will still contribute about ~80% of the genomic information in the future daughter population that emerges out of amalgamation.