Americans know that the Ogallala Aquifer is important, and declining. This is much more of an issue in India, Satellites Unlock Secret To Northern India's Vanishing Water:

Using satellite data, UC Irvine and NASA hydrologists have found that groundwater beneath northern India has been receding by as much as 1 foot per year over the past decade - and they believe human consumption is almost entirely to blame.

Here's a map of the population density of India by district: 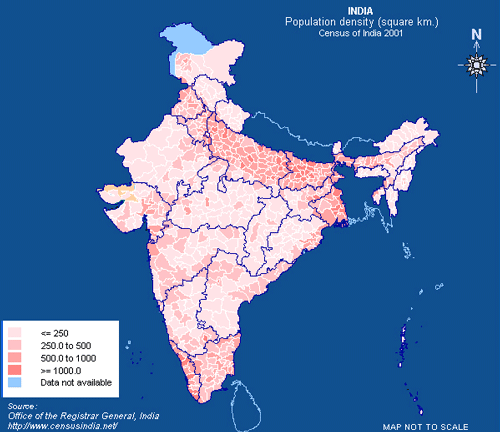 And now a map of the change in the levels of groundwater (red = decline, blue = increase): 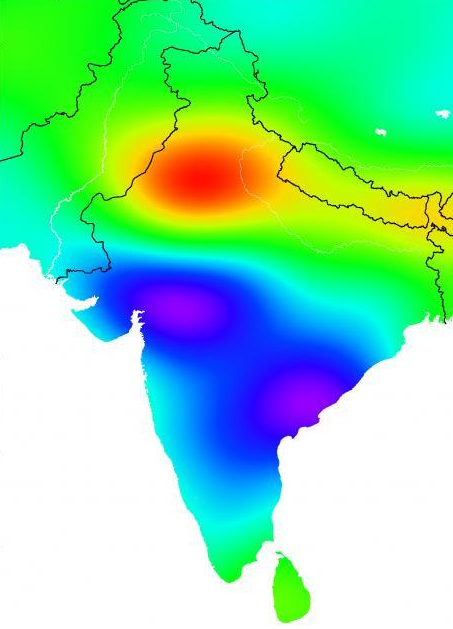 The original letter to Nature, Satellite-based estimates of groundwater depletion in India:

Groundwater is a primary source of fresh water in many parts of the world. Some regions are becoming overly dependent on it, consuming groundwater faster than it is naturally replenished and causing water tables to decline unremittingly. Indirect evidence suggests that this is the case in northwest India, but there has been no regional assessment of the rate of groundwater depletion. Here we use terrestrial water storage-change observations from the NASA Gravity Recovery and Climate Experiment satellites and simulated soil-water variations from a data-integrating hydrological modelling system to show that groundwater is being depleted at a mean rate of 4.0 1.0 cm yr-1 equivalent height of water (17.7 4.5 km3 yr-1) over the Indian states of Rajasthan, Punjab and Haryana (including Delhi). During our study period of August 2002 to October 2008, groundwater depletion was equivalent to a net loss of 109 km3 of water, which is double the capacity of India's largest surface-water reservoir. Annual rainfall was close to normal throughout the period and we demonstrate that the other terrestrial water storage components (soil moisture, surface waters, snow, glaciers and biomass) did not contribute significantly to the observed decline in total water levels. Although our observational record is brief, the available evidence suggests that unsustainable consumption of groundwater for irrigation and other anthropogenic uses is likely to be the cause. If measures are not taken soon to ensure sustainable groundwater usage, the consequences for the 114,000,000 residents of the region may include a reduction of agricultural output and shortages of potable water, leading to extensive socioeconomic stresses.

Punjab and Haryana are the "breadbaskets" of India, where modern farming has pushed aside subsistence. This resulted in India becoming an exporter of wheat.