Over at Secular Right I point out that Romania is set to decriminalize consensual sexual relations between adult first-order kin. That is, incest. There are a few angles that this story offers. First is the moral-ethical one. From a rational individualist perspective how reasonable are laws which ban consensual sex between adults who just happen to share distinctive genetic information? The love that dare not speak its name because of alleles which are identical by descent? Of course all this rational talk is irrelevant for most people. Incest is gross, repugnant and immoral. Not because incest is irrational or unreasonable, human instinct just tells us that it's wrong. For most humans the repulsiveness of incest requires as much justification as the repulsiveness of consuming feces. My earlier post, The biological roots of moral sentiments?, and Jonathan Haidt's distinctions between liberal and conservative morality, are relevant in explaining some of the variation in condemnation you see across the population toward "victimless crimes." Since I've addressed these issues before I won't touch upon the rightness or wrongness of incest any further. Rather, a commenter at Secular Right points out a very utilitarian reason for criminalizing sex between near relations:

Were I a Romanian, paying taxes that went to a public health system, I'd probably oppose legalizing incest because of the possibility of the unnecessary burden on the public. We actually have this problem here in Arizona from Warren Jeffs' FLDS. (Fundie Mormons, if you hadn't heard of them.) Incest is fairly common among insular religious communities. Here in Az, the FLDS up in Colorado City practice polygamy and have multiple marriages amongst the same few families. (We know of granddaughters being married to their grandfathers, among other convoluted and forced relationships.) The state's public health system covers the results. Here's a piece of local investigative reporting on the matter: http://www.phoenixnewtimes.com/2005-12-29/news/forbidden-fruit I went to high school at a Mennonite Church-run high school and knew people who were only a generation removed from Amish communities. We had one girl who was a dwarf as a result of Amish inbreeding.

This is one that comes up frequently. In a system of socialized medicine where you are your brother's keeper, you are also your brother's minder, and their business is your business. Recessive diseases are a major issue when it comes to incest between relatives whose coefficient of relatedness is 1/2 (parent-child, full sibling). Consider:

The medical risks of in-breeding are illustrated in the few well-documented cases of consensual incestuous couples. In Germany, a brother and sister couple challenged the courts so they could continue their relationship. They had four children, three of whom are in foster care and two have unspecified disabilities. In Australia, John Deaves and his daughter Jenny have been in a relationship for the past seven years. The pair had two daughters but one died shortly after birth because of a congenital heart disease.

One of Elisabeth Fritzl's sons by her father died soon after being born because of a congenital heart problem. I'll be posting on a paper tomorrow which suggests that mortality due to first-order incest is far lower than it was in the past because of modern medicine, but modern medicine might be better at transforming mortality into morbidity than abolishing the physiological downsides. 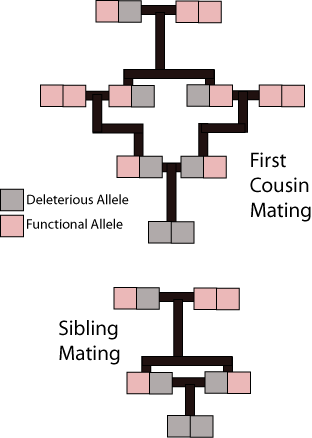 Why are the offspring of two siblings who mate at so much greater risk than those born from two cousins? To the left you see two simple pedigrees with negative outcomes: the offspring express deleterious phenotypes because they get two copies of a defective gene from their ancestors. As you can see there are many more steps in first cousin matings than in sibling matings. Siblings share ~1/2 of their genes identical by descent from their parents. First cousins only share ~1/8 of their genes. Consider an individual who has a very rare deleterious mutant that is masked in a heterozygote because of recessive expression. This is all of us, as we all carry many deleterious mutants which are masked, and likely a handful of lethal ones too. There is a 1 out of 2 chance that any given one of your children will carry the mutant. There is a 1 out of 4 chance that any given one of your grandchildren will carry this mutant. So as you can see the risks diminish down the generations as the likelihood of any two individuals across the family tree of carrying a mutant is diluted. But in brother-sister matings mutants only need to jump a few steps of independent probabilities. Of course when you have an inbred clan, like the radical Mormons alluded to above, the inbreeding coefficients start to go up very high and can approach that of siblings between relatives who are not technically siblings.