As I've been posting about effective population and inbreeding, I thought this re-post would be appropriate. 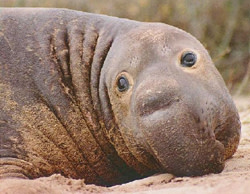 This sort of data makes it intuitively clear why population

(the long term effective population size is the harmonic mean of the size in individual generations, about ~ t/(Σ1/

). Evaluated over the past few thousand years the northern and southern elephant seals would have numbers of genealogical ancestors in keeping with their modern population sizes, but examining their diversity of alleles would suggest that the former went through a recent bottleneck and had a small "effective population" evaluated over the whole period.

Mendelian genes are a concept that only has become popularized in the last 100 years, while the molecular idea of a gene (promoters, termination, and all the wrinkles that eukaryotic gene regulation is subject too) only has exploded onto the scene within the past few generations. But we have tens of thousands of years of comfort with the idea of ancestry. It may be a species typical trait (The Ancestress Hypothesis argues for the relationship between visual art and the emergence of concepts of kinship). In the past genuine knowledge of ancestry was an affair more of imagination than fact beyond a few hundred years (4-8 generations?), but today scientists claim that they have genuine evidence of who "your ancestor was 10,000 years ago." Of course they are quick to add that they are simply tracing the descent of a particular gene (or allelic variant of a gene), but such fine print generally gets lost in the bold headlines in the press release. I have discussed the same issue in relation to paleoanthropology, mitochondrial Eve went from being the bearer of the ancestral mitochondrial DNA sequence of all humans to the "mother of us all." This is not a minor point, at least in terms of the inferences it triggers in the mind of the typical person on the street. The caveats that other women were alive at the time who were also our foremothers, definitely genealogically, and possibly genetically, is usually drowned out in the sensationalism.

This isn't an issue relating just to lay persons, Darwin still hewed to the blending theory of inheritance, even though such a theory implied the loss of the genetic variation that was necessary for evolution via natural selection! Of course within our own lifetimes children are "blended" forms intermediate between their parents because of the prominence of polygenic continuous traits that are expressed via additive effects (each allele on the locus expresses independently an equal contribution to the phenotype). But this obscures the reality that genes are discrete information particles, not analog copies. Because they are discrete information particles population bottlenecks are significant because the number of slots in which various alleles can fit into are sharply reduced (each individual has two slots for two copies, alleles, of a given gene), and even when the population expands to its pre-bottleneck size genetic information has usually been permanently lost, as rare alleles may drift to extinction in a one generational event (via increased sampling error, as the number of any given allele drawn from a large population deviates more from expectation with a reduced number of draws). This does not mean that the number of total ancestors has declined greatly if you go back far enough, but at a certain point up the tree of descent the term "ancestor" starts to become disconnected from the genetic meaning that we normally ascribe to it through common sense observation in everyday life. While you can be reasonably sure that your grandparents contribute aproximately equally to your phenotype evaluated over all traits because each contributes about 1/4 of the genes you carry, as you move further back up the tree of your ancestry some ancestors begin to show up many more times than others (because of differential reproduction, population substructure or inbreeding). And even if you have individuals X and Y who show up an equal number of times you may carry no alleles identical by descent (IBD) from from X though you may carry some from Y (independent assortment, drift and recombination playing into the outcome).

Whether it is hard-wired or shaped by experience with human cultural norms is irrelevant, the issue is cognitive. Part of the problem is an improper mapping of descent analogy of humans within our own lifetimes and the lineages of alleles over the generations. The schema for ancestry, kinship, is simply being used whenever people talk about "genes," which causes serious confusions. Nevertheless, it is "ancestors" that people care about, flesh-and-blood human beings, not alleles, alleles are an abstract concept which little relevance and trigger fewer emotionally salient associations and inferences. This is why Richard Dawkins' most recent book was titled The Ancestor's Tale even though throughout the book his main preoccupation is with genes (a point he makes explicit repeatedly). I have implied that this issue might be one reason that the Recent-Out-of-Africa has widespread support among many scientists, it resolves the conflicts between various ideas of ancestry and species-individual coherence.

As I observed above, I think a great deal of the problem is that while a gene in the strictest sense, whether on the molecular of populational level, is a formal or rule based concept that has arisen somewhat artificially out of the body of modern genetic science, there is a regular conflation with the universal schema of genealogical ancestry, a more complex and loose concept which is more suited to the fluidity of the everyday world. Since the general public isn't going to be reading cognitive science primers to clear up confusions between different types of mental constructs and processes anytime soon (and scientists regularly use schemas and metaphor in their scientific life as well), all we can do is keep repeating the weirdness of the selfish gene when it deviates from common sense.