In Movie Theaters, Suspense Literally Hangs in the Air 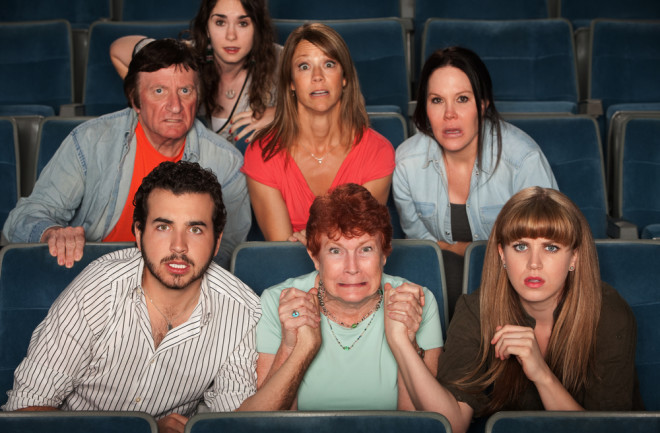 (Credit: CREATISTA/Shutterstock) When someone says "suspense is in the air," they're being more literal than they realize. A new study from German researchers shows that we exhale a unique mix of chemicals when experiencing certain strong emotions, such as fear or excitement, and that these invisible signatures can be monitored to track how an individual or crowd of people is responding. To test their theory, they went to the theater, where suspense, terror and laughter abound.  That our bodies emit different chemicals depending on our physiology was known — it's how a Breathalyzer works, for example — but it had never been well-studied in the context of emotions. Strong emotions, such as fear, produce aromatic signatures revealed by chemicals seeping through our sweat glands — it's what gave rise to the notion of "smelling fear." Getting a glimpse at the full range of emotions as documented by our exhalations hadn't been successfully tested, however.

A previous attempt to gather a whiff of collective emotions at a soccer match fell flat, as the match ended in a 0-0 tie, stymieing their efforts to measure the chemical signatures of jubilation on our breath. But in the more controlled environment of a movie theater, scientists from the Max Planck Institute for Chemistry and the Johannes Gutenberg University in Mainz, Germany were guaranteed some thrills. In total, they gathered data from 9,500 people watching 108 screenings of 16 different movies at a movie theater in Mainz. They hooked a mass spectrometer up to an outgoing air duct and took measurements of the chemicals in the air every 30 seconds. The movies they used included The Hunger Games 2, The Hobbit, Carrie, Buddy and The Secret Life of Walter Mitty. They wanted to look at a range of film types to measure reactions to different kinds of stimuli, from humor to fright.

Thomas Klupfel, one of the paper authors, installs a tube in the ventilation system to collect moviegoers exhalations. (Credit: MPI for Chemistry) They primarily focused on CO2 in their analysis, as a higher rate of exhalation, a result of fear or laughter, will produce more of the molecule. They also noticed that levels of another chemical, isoprene, spiked during exciting situations. Isoprene is the most abundant hydrocarbon in our breath, and is thought to be the product of cholesterol synthesis in our bodies. While they are not sure if specific bodily processes related to arousal create isoprene, or if it's just a function of heavier breathing, they were able to predict when an exciting event was occurring just by looking at sharp increases in the concentration of the chemical. They published their findings this week in the journal Scientific Reports. Discover's Neuroskeptic raises a few questions about whether the team's stats hold up to closer scrutiny.

Across four separate screenings of the Hunger Games, the scene where Katniss' dress bursts into flames caused spikes in levels of telltale chemicals. While they found that both suspense and humor gave clear signals, other emotions were more muddled. Researchers believe this is because both suspense and humor produce physiological responses that alter the chemistry of exhaled air. Suspenseful scenes, for example, will cause our hearts to beat faster and speed up our metabolism, both responses that quicken breathing and set off unique chemical reactions in our bodies. Researchers say that their work will help increase the accuracy of future studies examining clues in our exhalations. There are currently studies examining whether cancer in the body can be detected by analyzing patient's breath, for example, and the data could be skewed if a subject is feeling nervous or afraid. The work could also be important for focus groups and other studies where measuring people's responses is important. We really have very little control over how our breath looks, as it's tied to physical processes within our bodies that result from emotional states, so it serves as a powerful indicator of how we really feel. You may be able to lie, but your breath will always tell the truth.