In Hospitals, If Your Disease Doesn't Kill You, a Cell Phone Might 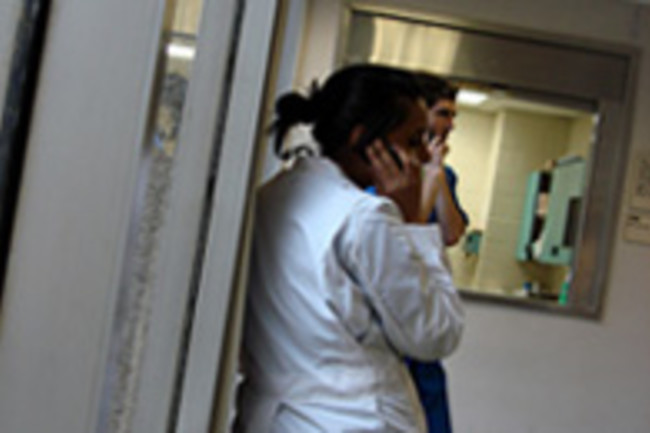 Looks like radiation may not be the biggest health concern posed by cell phones. Turns out our trusty phones may be making us sick in a more direct way: by spreading bacteria in hospitals. Turkish researchers have found that 95 percent of cell phones were contaminated with at least one kind of illness-causing bacteria. They tested the phones and dominant hands of 200 hospital doctors and nurses, and found that almost 35 percent carried two types of bacteria, and more than 11 percent carried at least three types. Perhaps scariest, though, is that one in eight phones were found to carry the methicillin-resistant Staphylococcus aureus (MRSA), a virulent strain of bacteria that has raised health concerns in hospitals worldwide. The general public needn't be alarmed, as the bacteria do not pose threats to healthy people—but they do increase the risks to patients with conditions that compromise their immune systems. Scary, yes, but a problem easily solved: All it would take is a quick wipe-down with an alcohol-based disinfectant to kill any nasty bugs. Too bad only 10 percent of hospital staff members currently clean their phones. Related Content: DISCOVER: The Biology of ... Hand-Washing 80beats: Cancer Doctor Issues a Warning About Cell Phones, and Causes Panic Discoblog: Worst Science Article of the Week: Use a Cell Phone, Damage Your Baby