Ignored Strain of Bird Flu Could Lead to a Pandemic... of Light Sneezing 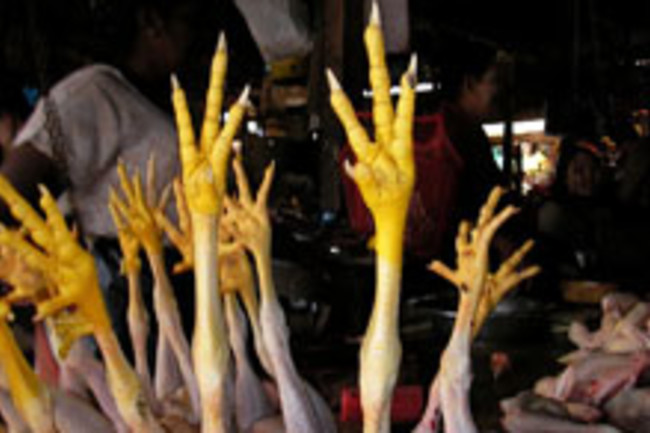 When researchers speak in ominous tones about the possibility of a pandemic of avian influenza, commonly known as bird flu, they're usually talking about the virus strain known as H5N1, which has killed 243 of the 385 people it has infected since 2003. But according to a new study, a relatively ignored strain known as H9N2 could easily mutate into a form that spreads freely among humans. Luckily, researchers say that even if the H9 virus does

acquire the ability to spread in people, at first the infection is likely to cause minor illness. “You’re going to have a bunch of people who don’t feel very well, as opposed to dropping off the face of the Earth,” says Raymond Pickles, a cell biologist.... But the new data indicate that if the H9 viruses mix with other human viruses, as commonly happens in nature, it could become more potent [Science News].

There are hundreds of strains of avian influenza viruses, but only four -- H5N1, H7N3, H7N7, and H9N2 -- are known to have caused human infections, according to the World Health Organization [Reuters].

The H9 virus is known to have infected four children in Hong Kong, who were only slightly sickened, though it's thought to be carried by millions of birds in Asia, the Middle East, Europe and Africa. In the new study, published in the journal PLoS ONE, researchers injected the virus into ferrets, which are a useful model for human flu transmission. They found that a single mutation in the virus made it more virulent and pathogenic, and also helped it transmit more easily from one ferret to another [Reuters]. They also mixed the H9 virus with a common cold virus to duplicate a natural process called "reassortment," which occurs when a human is infected with two strains of the flu at the same time, allowing the viruses' DNA to mix. Researchers say the reassorted virus was also more virulent. Researchers say the bottom line is that the H9 bird flu virus could easily make the leap into humans, but unless it mixes with a really nasty virus it won't cause anything worse than a sniffles pandemic.