If You Stuck Your Head in a Particle Accelerator ...

(We don't recommend it.) 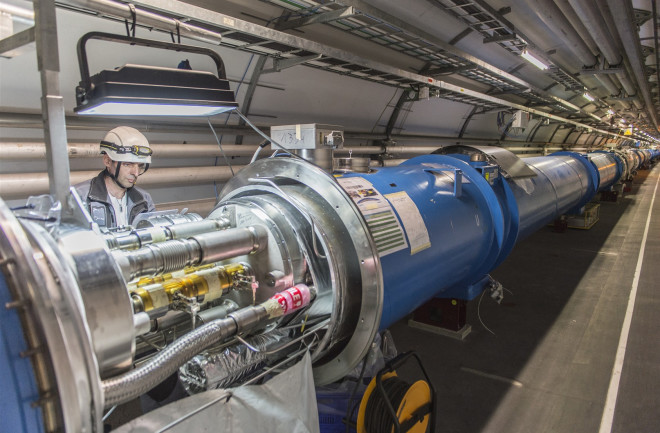 A technician works on the Large Hadron Collider at CERN. (Credit: Anna Pantelia/CERN)

What happens when you stick your head inside a particle accelerator and get hit with a beam of trillions of protons? Well, if you’re Anatoli Bugorski, you go on to finish your PhD.

Bugorski is the only person known to have been exposed to a particle accelerator beam, the result of an accident that occurred while he was working at the Institute for High Energy Physics in Russia. On July 13, 1978, he leaned into the path of the U-70 synchrotron while it was still on and a burst of high-energy protons traveled through the back of his head and exited near his nose. He felt no pain, but experienced a flash of light “brighter than a thousand suns.”

The amount of radiation that the beam delivered was staggering — 2,000 gray (defined as one joule of radiation energy per kilogram of matter) on the way in, and, as a result of collisions with particles as it passed through, 3,000 gray by the time it left. A dose of around 5 gray can be lethal to humans. Bugorski was taken to the hospital and placed under observation; it was thought he would surely die, but the case represented a unique opportunity to study the effects of radiation.

The accelerator Bugorski stuck his head in, and others like it, take beams of particles and smash them together at nearly the speed of light. Scientists then observe what happens when tiny particles break apart. The beams are tiny, no wider than a pencil, and composed of particles that are so small it’s hard to even fathom them. But protons are still very much physical objects, and when you take trillions of them and force them through something as delicate and complex as a human cell, the collisions tend to tear biological structures apart.

It turned out that Bugorski was OK, relatively speaking. The left side of his face ballooned to comical proportions, and his skin blistered and peeled off where the beam had struck, but those symptoms were only temporary. He lost hearing in his left ear, replaced by a form of tinnitus, and the left side of his face gradually became completely paralyzed. In the long-term, Bugorski suffered for a time from both petit mal and grand mal seizures and found that he became more easily mentally fatigued. He nevertheless went on to earn his doctorate, and even returned to work at the same facility where his accident occurred.

Radiation harms our bodies by breaking apart chemical bonds that hold DNA and other cellular components together. With enough radiation, cells are unable to duplicate and begin to die, leading to organ failure. Common symptoms are nausea, vomiting, dizziness and headaches; additionally, radiation will often cause levels of both red and white blood cells to drop precipitously. The skin will usually redden and sometimes blister at the site of the exposure as well.

While Bugorski’s skin behaved as we would expect from radiation poisoning, what prevented him from experiencing much more damage is still unknown. That the beam was narrowly focused likely helped, however. Most radiation exposure affects the whole body, meaning that whole organ system are affected. In Bugorski’s case, only his brain received any exposure to the radiation, keeping the damage concentrated to a single area. He may have just been lucky, and the beam missed important areas of his brain, or perhaps proton beams affect the body differently than other sorts of radiation. Because accidents like this are (luckily) so rare, we don’t have many case studies to look at, and the effects of super-high energy proton beams on the body are relatively unknown.

Proton beams today are actually used for therapeutic purposes, though. Particle accelerators can deliver targeted doses of radiation to cancer patients, a process known as proton beam therapy. Protons are heavier and can be directed with more precision, targeting tumors to destroy the cells that make them up. Those doses are around 300 times smaller than the one Bugorski sustained, and the side effects even for proton beam therapy can be severe.

Were this a comic book, Bugorski would certainly be endowed with fearsome powers in the aftermath of his accident. As it is, he’s probably just happy to be alive.