How Fast Can Humans Go? 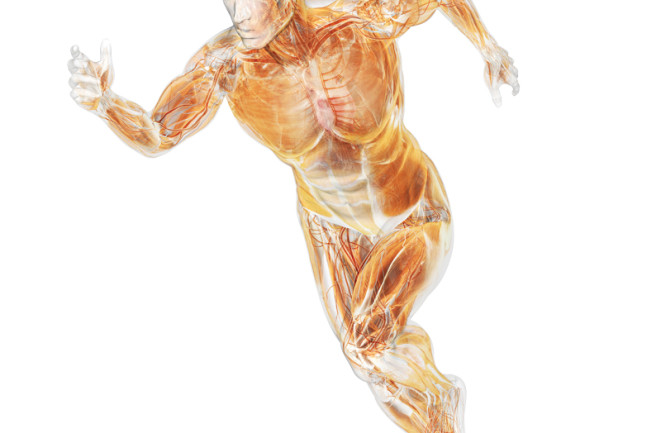 Humans are pretty quick. In 2009, Usain Bolt flew down the track at over 23 mph; in 2014, Dennis Kimetto, the marathon world record-holder, cruised along at 12.8 mph — about a 4:42-per-mile pace — for 26.2 miles. Scientists are uncovering what makes the Bolts and Kimettos of the world tick, and how we evolved to do both. That knowledge is redefining what’s possible and may help you speed up, too.

Muscle fibers come in two general types, fast- and slow-twitch, and everyone has a mix of both. Fast-twitch fibers are for short, powerful bursts; they contract quickly but also fatigue quickly. Slow-twitch fibers have more mitochondria — the cells’ powerhouses that use oxygen to make energy — so they don’t fatigue as easily and are ideal for longer activities.

As you’d suspect, sprinters have more fast-twitch fibers, while endurance athletes have more slow-twitch. Although partly genetic, there’s some evidence we can train in order to change the proportion of fibers our muscles have. For example, distance running at a slow pace may increase a person’s percentage of slow-twitch fibers.

The Anatomy of a Runner

Fast Factors: Sprinting Everyone takes the same amount of time between steps and the same amount of time to pick up their leg and put it back down again, but faster sprinters propel themselves farther in that time. “The difference in speed really comes down to what happens on the ground,” says Peter Weyand, a physiologist and biomechanist at Southern Methodist University in Texas. “Fast people hit with more force in relation to body weight.”

Elite sprinters use their legs to “essentially throw a punch at the ground,” he explains. They get that extra force from their characteristic knee lift: Raising the knee higher gives the leg more space to gain velocity before hitting the ground, so it hits with more force.

To sprint faster, Weyand suggests two things. First, try to get the foot that’s behind you off the ground faster. As the front foot lands, the back leg’s knee should be even with the landing knee; if it’s still behind the landing knee, the knee lift in front of the body can be compromised, weakening the punch. Second, try to keep your body stiff when you land. Elite sprinters don’t let anything collapse — no floppy ankles, buckling knees, or even head movement — so they don’t lose any force as they pop back off the ground again.

To run fast for a long stretch, energy supply is key. If you run faster than your body can supply energy, you’ll have to slow down. “So the game for the distance runners really is economizing,” Weyand says. “The faster you can run at a lower rate of energy burn, the better off you are.”

There are two ways to improve energy supply while maintaining a quick clip: either produce more energy or burn less. Producing more means increasing something called VO2max, the maximum amount of oxygen you can take in and turn to energy while exercising. Having a high VO2max is partly genetic, but also somewhat trainable, especially for new runners. To boost it, run interval workouts: After a warm-up, run hard for 3 to 5 minutes, then jog for 2 to 3 minutes to recover. Repeat about five times before a cool-down jog.

To burn less energy, you’ll need to improve efficiency, or running economy. Ways to do this are less fleshed out than methods of increasing your VO2max, but Weyand says the typical approach of tapering before a big event — reducing mileage and running faster workouts — can help. But Alex Hutchinson, author of Endure: Mind, Body, and the Curiously Elastic Limits of Human Performance, says the best thing is simply to run more. However, he acknowledges that most recreational runners are pressed for time and injury-prone. In that case, lessons gleaned from two-hour marathon attempts (see "Breaking Point," right) may help: Optimizing nutrition, race strategy, and maybe even fancy shoes can help us do the best we can with what we’ve got.

According to a theory made famous by Dennis Bramble and Daniel Lieberman in a 2004 Nature paper, humans are born to run — and run far.

“There are a bunch of [adaptations] that have nothing to do with walking,” says Lieberman, a human evolutionary biologist at Harvard University. “They’re just slam-dunk running adaptations.” The theory proposes that early humans evolved these adaptations, along with tracking, to chase antelope until the animals collapsed from exhaustion and heat stroke. Winning the footrace meant dinner.

Keeping Cool: In addition to being furless, we have far more sweat glands than most other mammals, giving us an advantage over fuzzier animals that have to stop and pant to cool down.

Baby Got Back: A large gluteus maximus muscle — a big butt — is a distinctive human feature. We rely on it minimally for walking, but it’s crucial to stabilizing us when we run.

Springy Tendons: Our legs have long tendons — such as the Achilles — that act like springs, helping generate force and reducing the energy cost of running. And they don’t seem to provide much benefit to walking, another piece of evidence that our bodies are made for running.

In December 2016, with the world marathon record at 2:02:57, Nike announced an audacious goal: to break the two-hour barrier.

Experts initially balked at the mission. But last May, Eliud Kipchoge, a 2016 Olympic gold medalist marathoner from Kenya, ran 2:00:25 — just one second per mile off the necessary pace.

The sport’s governing body doesn’t consider Kipchoge’s run a world record because it didn’t follow the regulations for official records. But physiologists are using it to devise ways to cross the threshold on a record-eligible course.

Hutchinson guesses there are a few factors that helped Kipchoge. Nike’s new shoe technology, engineered for the project, probably shaved off a minute. He shed maybe another minute by drafting — reducing wind resistance by running behind someone else, pacers in this case — and 30 seconds from other things, like the flat course.

At last fall’s Berlin Marathon, runners had already adopted the drafting strategy. Nike’s new shoes, the Zoom Vaporfly Elite, are controversial; the company helped fund the only published study about them. But Hutchinson thinks the evidence is strong enough to suggest they’re “not just advertising hype.”

Weyand, also a member of a similar project, Sub-2, says efforts go beyond shoes and drafting. Scientists are also working to optimize how much energy runners can extract from fuel sources. It will take perfecting a combination of factors to break the barrier.

Humans vs the Animal Kingdom

While Usain Bolt’s 100-meter world record of 9.58 seconds may seem mighty fast, it’s not much to brag about in the animal kingdom. A cheetah has been clocked running about three times faster than Bolt.

On the endurance side of things, we stack up a little better. In races that pit humans against horses, some of the humans — not even elite runners —beat some of the horses. But Weyand studied pronghorn antelopes in the lab, specially formatting treadmills that could go fast enough. He found them to be about three times faster than the best human marathoners.

Lieberman says that’s scraping the bottom of the barrel. At long distances, “humans can and do … outrun all kinds of critters,” he says.

Here’s how we stack up: