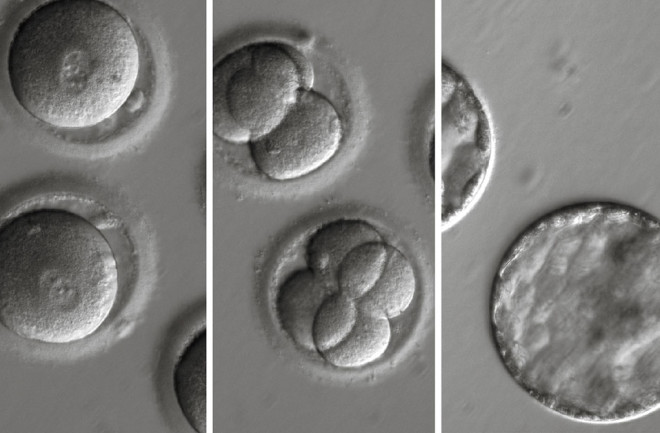 In just a few short years, the gene-editing tool CRISPR-Cas9 has infiltrated biology labs around the world. This summer, scientists working in a U.S. lab announced they’d used CRISPR to modify viable human embryos, which were kept alive just a few days. The research is a first in the United States, though scientists in China have conducted similar experiments.

This latest effort, led by researchers at Oregon Health and Science University, also succeeded in avoiding unintended effects — something that’s plagued other researchers. The team fixed a mutation by removing a disease-causing gene from an embryo. The repair, reported in August in Nature, corrected an inheritable heart condition, passed down by the embryo’s father, the study’s lone sperm donor.

“This embryo gene correction method — if proven safe — can potentially be used to prevent transmission of genetic disease to future generations,” says study co-author Paula Amato. Once it is proven safe, researchers hope to start clinical trials. That would mean implanting the gene-edited embryo into a woman and studying the genetically engineered child. If clinical trials don’t get FDA approval, study leader Shoukhrat Mitalipov says they would pursue them abroad.

Exactly how the mutation was fixed was surprising to Mitalipov’s team.

They expected that their use of CRISPR would introduce a “template” to guide the DNA to fix the faulty gene. Instead, the embryo replaced the targeted bad gene with a healthy gene from the mother — a conclusion that’s been criticized by a group of prominent scientists. They questioned the mechanism involved in the repair of the mutation.

Researchers should tread lightly when it comes to editing the genes of human embryos, according to guidelines handed down in February. The report — issued by dozens of experts convened by the National Academy of Sciences and the National Academy of Medicine — says so-called germline editing, in which genetic changes are passed to future generations, should happen only when there’s no “reasonable alternative” treatment. Doctors already can remove problematic embryos and implant healthy ones using in vitro fertilization. The panel also said the genes of embryos shouldn’t be edited for reasons other than treating or preventing disease or disability.

More From Discover
Health
How Much Water Should You Be Drinking Each Day?
Health
What is Epilepsy and What Should We Know About it?
Health
What is Long COVID and What are the Symptoms?
Health
A Blood Test That Screens For Multiple Cancers At Once Promises To Boost Early Detection
Health
Decorate For the Holidays Early and it Might Improve Your Mood
Health
Feeling Sleepy After a Thanksgiving Meal? It Might Not Be the Turkey
Recommendations From Our Store
My Science ShopDiscover STEM Kits
My Science ShopDiscover 2022 Calendar
My Science ShopStrange Science
My Science ShopElements Flashcards
Shop Now
Stay Curious
Join
Our List